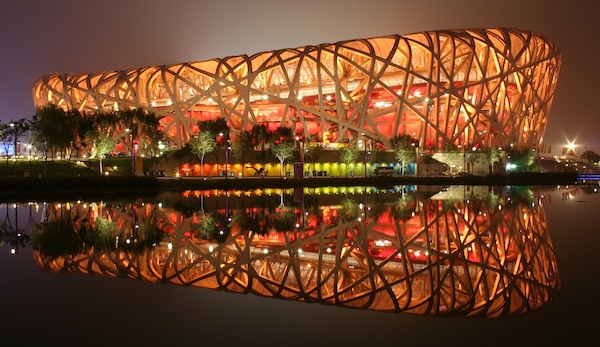 The Biomimicry Institute, founded in 2006, describes biomimicry as “the practice of looking to nature for inspiration to solve design problems in a regenerative way.” The history of product design shows biomimicry was already in practice long before the term itself was first coined.

Traveling at the speed of 150–200 mph, the Shinkansen bullet train from JR-West set new records in public transportation, but the engineers wanted to improve the passengers’ experience by making it quieter. When it sped through the tunnel, the tunnel boom was particularly noticeable.

The engineers found the answer to their sonic problem in the elegant shape of the kingfisher’s beak, which allows the bird to slice through air or water without making a splash to catch its prey (“High Speed Train Inspired by the Kingfisher,” asknature.org).

A more obvious example is the Beijing National Stadium, designed by architects Jacques Herzog and Pierre de Meuron and built especially for the 2008 Olympic. Its general shape and the complex network of beams and trusses supporting it, are inspired by the shape and woven patterns found in bird nests. As a tourist attraction for China travellers, it’s better known by its nickname, the Bird Nest, than by its official name.

A more prevalent example is the attachment mechanism in Velcro, which was inspired by the cockleburs that clung to the company founder’s dog (“A Mind-Blowing Biomimicry Example,” www.velcro.com/blog).

But biomimicry is starting to transcend discipline, lately seeping into the basic architecture of the design software. Some commercially available generative design (GD) packages, as it turns out, include Nature-inspired algorithms.

Before GD became part of Autodesk Fusion 360, it was in incubation as a technology preview, under the name Project Dreamcatcher. Like all other GD software, Autodesk’s technology relies on specific algorithms that instruct the software where to remove materials and where to add more to create the best topology to withstand the anticipated stresses in a given design.

Nanda Santhanam, Chief Architect, Generative Design Project at Autodesk, recalled studying, among other things, “the termite nests, and the way the termites use pheromones to signal one another.” He explained, “We create stress or pheromone gradients. The core approach is quite simple, but the results are complex.” 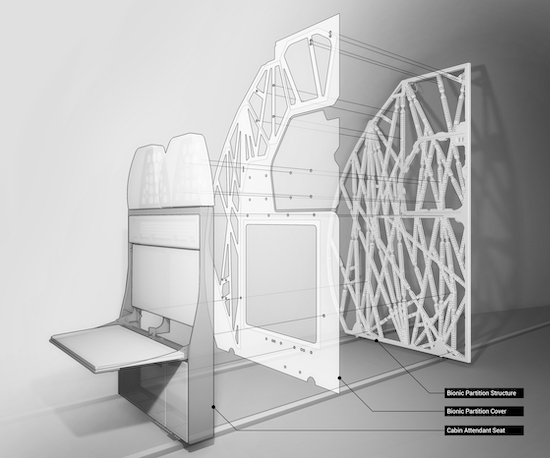 One of the early test projects for Autodesk’s GD was the design of a cabin partition destined for the Airbus A320. Bastian Schaefer, Innovation Manager at Airbus, anticipates the plane of the future “will be designed to be much lighter, to use less fuel, and to leave a smaller carbon footprint,” according to Autodesk’s published case study. But he must also balance the lightweighting goals against the need for robust design. “Light is good, but we can’t lose strength or safety,” he said.

The final frame design, dubbed the Bionic Partition, includes a network of joints and membranes mimicking the growth patterns found in slime molds and the grid structures found in mammal bones. Made up of more than 100 separate high-strength metal alloy pieces, the partition was 3D-printed and assembled. The design was 45% lighter than the average Airbus partition, according to the case study. 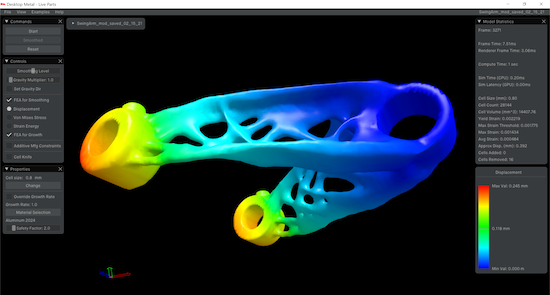 To mimic the additive process, Desktop Metal’s software engineers needed a way to automatically grow materials in response to stress regions. They found the formula in cell growth patterns.

“I looked at how plant cells respond to external stimuli, like chemicals from light. So I have cells in Live Parts reacting to stress and strains, then spawning additional cells, called child cells,” said Andy Roberts, the development talent behind Live Parts and the Technical Fellow at Desktop Metal.

With Live Parts, “users can adjust loading conditions, materials, resolution, and even design objectives while the design grows and evolves. Live Parts responds in real-time, optimizing the design to reflect modifications while showing stress concentrations and other properties in real-time,” the company writes.

(For more on this topic, read “Studying Ants and Plants to Build Better Parts,” DE, June 2021.)

Because of its iterative nature and the need to run complex finite element analysis tasks in the background to identify stress regions, GD software usually benefits from cloud computing and GPU acceleration. Autodesk’s GD in Autodesk Fusion 360 leverages the AWS cloud and NVIDIA GPUs. The combination makes it possible for users to “run hundreds of simulations in hours, instead of requiring days or weeks,” the company states.

A large part of Live Parts real-time interactive nature comes from GPU acceleration and cloud-hosted architecture. The software runs in virtual machines powered by NVIDIA GPUs, allowing users to access the features anywhere from any device with an internet connection. 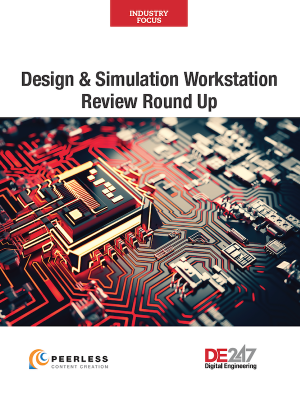