Implants that break down in the body could reduce pain, additional surgeries.

Implants that break down in the body could reduce pain, additional surgeries. 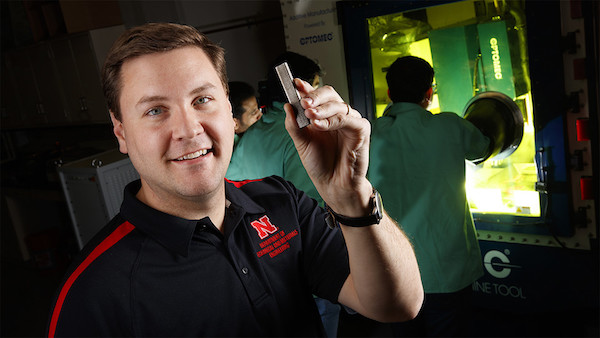 Engineers at the University of Nebraska-Lincoln’s College of Engineering have created a process to print dissolvable surgical implants using a 3D hybrid printer.

“This approach is essentially a way to print your own mechanical properties. It’s something that traditional manufacturing has never really had the ability to do before.”

The controlled atmosphere system can print dissolvable magnesium implants that researchers say could reduce the cost, risk and pain associated with implants like surgical screws and pins.

Team leader Michael Sealy, an assistant professor of mechanical and materials engineering, presented the research at the International Manufacturing Technology show in Chicago in September.

Most current medical implants are made of stainless steel or titanium, which remain in the body indefinitely or have to be surgically removed. 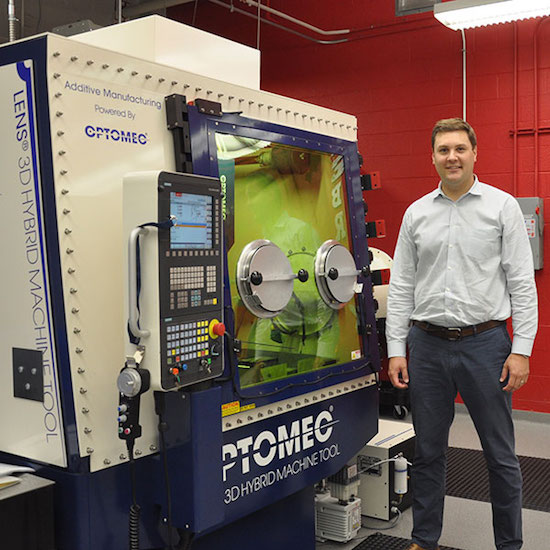 Michael Sealy, an assistant professor of mechanical and materials engineering, with the Optomec 3D Hybrid Machine Tool. Image courtesy of the University of Nebraska.

“Our research is focused on advancing the performance and functionality of dissolvable devices,” said Sealy, assistant professor of mechanical and materials engineering. “Using LENS, we are applying a hybrid additive manufacturing process to control the disintegration of medical fasteners and plates so they stay intact long enough to serve their purpose and then degrade away once the bone is healed.”

According to Sealy, he was partly inspired to develop the process because of the screws in his own elbow, remnants of an injury he sustained in the fifth grade that still cause him occasional pain.

“Instead of having these permanent metal implants, let’s have one that degrades over time,” Sealy said. “Let’s eliminate this whole idea of a second surgery to have these implants removed.”

The 3D print process allows for control of the magnesium’s degradation process in the body via laser peening.

“Instead of [laser] peening as a surface treatment, where I just hammer my outer surface, I’m going to print so many layers, and then hammer it, and then print a few more layers, and then hammer that,” Sealy said. “Then I can control corrosion all the way through these devices. This approach is essentially a way to print your own mechanical properties. It’s something that traditional manufacturing has never really had the ability to do before.”

Potentially, implants that degrade at different rates could be developed.