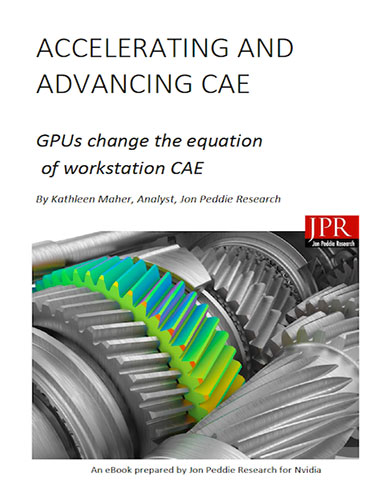 GPUs are changing the nature of engineering simulation, according to a new ebook by Jon Peddie Research (JPR). In Accelerating and Advancing CAE (Computer Aided Engineering), released September, 2022, JPR notes, “The major engineering simulation software providers including Altair, Ansys, Autodesk, Dassault Systèmes (Simulia), Hexagon MSC, and Siemens have relied on technology developed when CPUs were the primary engine driving computations. The arrival of graphics processing units (GPUs) in 2000 set the stage for a major transition in Computer Aided Engineering (CAE) as has happened in so many fields that benefit from parallel processing.”

CAE tools are used in a broad range of disciplines and have traditionally been used by specialists. However, mainstream CAD represents a major opportunity for CAE growth. JPR’s ebook traces the transformation of different types of CAE software. It also weighs in on the impact of the newer SaaS-style simulation tools. This month, DE catches up with JPR Analyst Kathleen Maher, the report’s author, to discuss the rise of GPU-accelerated CAE

According to the book, “In the first decade of 2000, computer-aided design (CAD) software vendors began acquiring CAE technology to add to the design pipeline. The idea was to integrate CAE capabilities into CAD and automate the processes for designers. That work is ongoing, and so are the acquisitions. At the same time, the CAE community has also recognized the need for advanced CAE requiring specialized skill and resources. The CAE software vendors are investing in GPU acceleration and advancing high-performance computing (HPC).”

DE: Is there a difference in the way the designers use the GPU for CAE, and the way the experts use it?

KM: The design tools themselves are adding more and more analysis capabilities. That dynamic will continue. They also benefit from the processing power increase. The more processors you add, the faster the job runs. The more you can do, the more you will do. For designers, this translates to more iterations. In CAD, designers often work with similar designs and challenges. CAE can tremendously streamline their work. In the higher end, analysis experts may encounter a range of problems, and if they can accelerate the analysis process, they may be able to explore design variations. Computational Fluid Dynamics (CFD) is a complex, resource-demanding form of analysis that is becoming more accessible thanks to GPUs. GPUs enable engineers to push the envelope and ask more questions. But I must say, it’s not easy to generalize the two groups especially as faster resources open up more opportunities for analysis.

JPR’s ebook says, “cloud-based CAD tools Autodesk Fusion 360 and PTC’s Onshape can also take advantage of GPUs in the cloud for simulation extensions to the programs.” In addition, Dassault has extended the ability of its CAD programs SOLIDWORKS and CATIA to access GPU acceleration through its cloud-enabled 3DEXPERIENCE platform.

DE: How do the emerging cloud-hosted SaaS-style CAE programs affect the use of GPU?

KM: It’s something we’d like to study more. But contrary to what people might think, cloud workflows do not make GPU computing less important. It just means the GPUs will be accessed in the cloud. The other misconception I want to address is that CPUs won’t go away. They’re good at tackling different kinds of jobs. The ability to use GPUs frees up the CPU to work more efficiently. What we explored in the current report are the traditional companies and the simulation tools they built years ago. These are shown to be reaping huge benefits from the GPUs. But I expect to see new programs written specifically for modern processor architectures. They may become more prevalent as development progresses to the cloud to take advantage of more computer resources. Also, how will the use of GPUs, cloud resources, and new processors including ARM-based processors change the balance between the CPU and the GPU?

DE: Is it more cost-efficient to run CAE programs on the GPU?

In the report, Maher writes, “GPU acceleration, once a nice-to-have component for design and engineering, is becoming a lynchpin for companies interested in advancing their practices. The CAD industry is changing rapidly as the idea of digital twins captures the imagination of the industry. We expect to see the technology improvements enable faster, cheaper iterations on the desktop and more sophisticated analysis (and bigger geometries) taking advantage of powerful HPC appliances.”