New Research Report Out: CAD in the Cloud – Market Trends 2017

Cloud adoption by the $8B CAD/CAM/CAE market increasing faster than predicted, according to the report.

Jon Peddie Research (JPR) and Business Advantage Group (BA) are making available their collaborative report on CAD in the Cloud: The CiC Market Trends 2017 report. CAD/CAM/CAE users are in the early stages of cloud-based workflow adoption. This report delivers a view of rapidly-emerging trends in this market, such as current and future usage plans, management and infrastructure approaches, hardware considerations, benefit perception vs. reality, and perceptions on importance of the technology, enablers and inhibitors and awareness of leading vendors.

The CiC survey shows 23% of survey respondents stated they “have already implemented CiC or are planning to within 12 months.” This level of adoption, combined with actions some vendors are taking towards cloud-based provisioning of applications and services, and with increasing use of content sharing services such as Dropbox, Google Docs, SalesForce and others, report authors assert there is potential for much faster acceptance of cloud-based workflows than previously thought. The survey includes the outlook of Autodesk users compared with non-Autodesk users.

For the next five years, CiC will not be the only way users interact with CAD tools. The report’s authors expect to see hybrid setups enabling users to choose between the cloud and their desktop, and use syncing technology to keep current. They suggest that just as the tablet was a disruptive technology to the PC, CiC will have the same effect on workstations and CAD in general.

Early adopters of CiC are evenly distributed by industry sector, with Manufacturing pulling slightly ahead of AEC (architecture, engineering and construction) and Other in plans to adopt. However, there appears to be uncertainty around adopting CiC.

For the past decade, the market for AEC has experienced steady growth, but in 2016, growth slowed somewhat compared to prior years. The outlook is complicated because of uncertain world markets. Growth in 2017 is expected to improve over 2016 but there are unknowns around the U.S. and European political climates and struggling economies that could impact it. Pressures around currency exchange rate fluctuations in subscription models by some AEC solution providers also makes the situation hard to predict.

Likewise, the major CAD vendors with customers in the manufacturing sector are interested in CiC workflows, the report indicates, though some are cautious about moving too far ahead of their customers.

When asked which CAD software vendors/developers are top of mind when thinking about Cloud based CAD, most survey participants were aware of Autodesk’s Fusion 360 (55%), followed by Onshape (26%), as seen in Fig. 10. 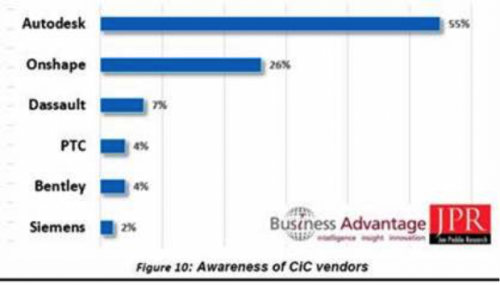 The authors believe the use of 3D tools is more likely to drive cloud workflows. When it comes to 3D workflows, they note Autodesk is not the leading contender. While Autodesk Fusion 360 requires a downloadable component, Onshape is a pure-play CiC program running entirely in the cloud. The add that, Onshape has good awareness among non-Autodesk users, as Onshape founders Jon Hirschtick, John McEleney, Tommy Li, Dave Corcoran, Scott Harris and Michael Lauer were active at SolidWorks. PTC was reportedly slower to commit to the cloud but with the company’s acquisition of ThingWorx and commitment to the Internet-of-Things, PTC’s fate is dependent on a strong cloud infrastructure.

There is a large base of 2D CAD, because the format holds legacy data and is the file of record in many industries. The authors observe a consistency that while 3D CAD represents the majority of revenue in the CAD industry, 2D CAD has more users. They see 3D evolving for design, construction and production, and 2D as a tool for documentation and archival.

The authors report “interesting” results when looking at top-of-mind awareness of CiC broken down by “AEC,” “Manufacturing” and “Other,” as shown in Fig. 13. Approximately 70% of AEC industry respondents are aware of Autodesk as a vendor of CiC solutions for the AEC space; however, in the Manufacturing space, vendor awareness is nearly on par between Autodesk (38%) and Onshape (34%). 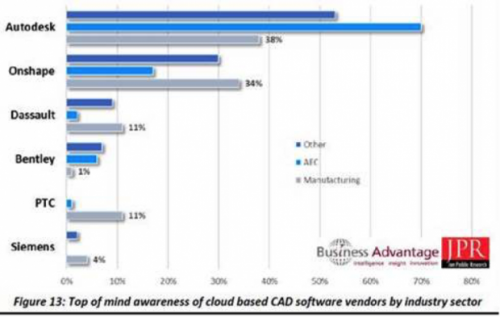 Manufacturing has a 20-year history in these practices with PLM (product lifecycle management), in contrast to BIM (building information modeling), which was relatively rare 10 years ago, according to the report’s authors. With the rise of digital project planning and asset management and collaborative tools, the cloud has enabled easier adoption of data management programs like PLM and BIM.

Survey Methodology, Audience and How to Buy

The report is built on results of worldwide survey research conducted individually by each firm, additional industry data and insights from JPR analysts. Report authors observe that a discrepancy in terms is causing some confusion, and to ensure clarity in this survey, CiC was defined as a “model where software applications are delivered to the user over the internet, i.e., software is not stored on the company’s network, desktop PC, laptop, etc.”

The CiC Market Trends 2017 report, according to JPR and BA, has been developed with the interests of the CAD/CAM/CAE/PLM and PDM industry sectors. It provides insight by industry, geography, company size, decision making authority, and in some areas, software usage, into the current thinking of engineers, designers, architects and managers, and design and engineering decision makers.

The report is available for purchase online. The cost of a site license for the report varies by size of organization.