NVH Testing: The Sounds of Success 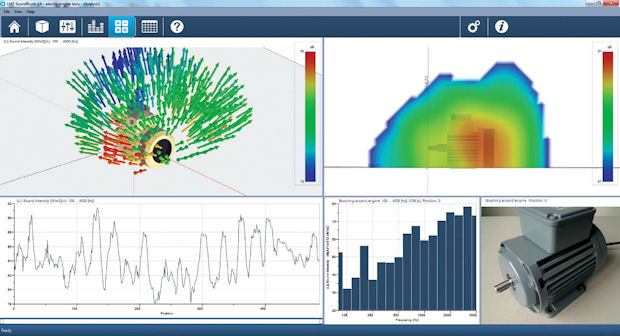 Anyone who’s ever spent a weekend trying to track down that annoying squeak in the family automobile knows just how difficult a task that can be. Unless you’re a bat or a dolphin, you can’t see sound.

LMS Soundbrush is a handheld scanning device incorporating a light, a camera and a 3D sound intensity sensor. You manually scan it over the object on which you want data, and the LMS software presents you with a color-coded 3D visualization of the sound field around that object—where sound is coming from, how intense it is, and the direction it’s taking as it emanates from the source. 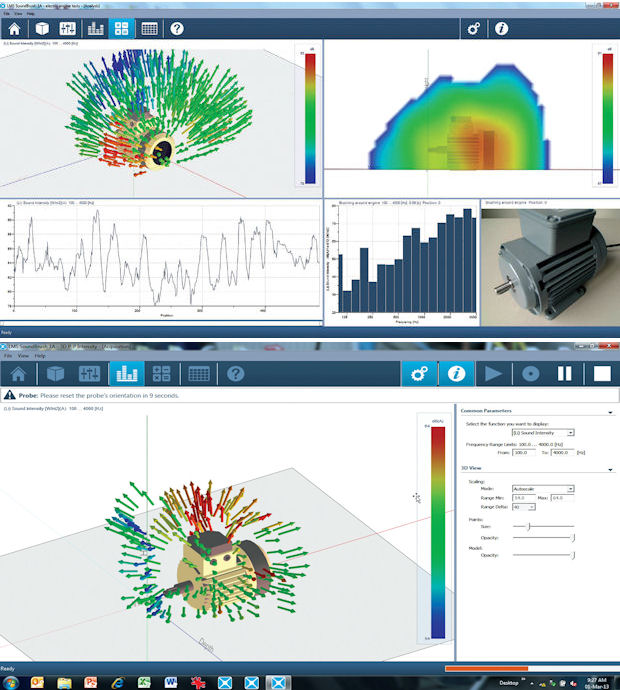 Examples of LMS Soundbrush software being used to visualize the sound coming from an electric engine. Images courtesy of Siemens PLM Software.

“It gives you a nice plot,” says Margaret Behm, Engineering Group Manager for GM’s Noise and Vibration Center. “We call it a ‘sardine chart’ because it looks like little fishes. It shows the direction of the sound and noise. You can plot it on top of a 3D model of your test object. You can manipulate the 3D views, or cut sections to determine the planar sound field wherever you’re interested in it.”

To pull this off, the SoundBrush has to know where it’s at in 3D space at all times. To that end, the system uses a simple motion tracking system incorporating inertial sensors and two cameras: one on the probe itself, pointed at the sound source, and one on a tripod pointed at the handheld probe.

The tripod-mounted camera uses the apparent size and position of an illuminated “ping pong ball” on the probe to determine the probe’s distance and relative location, while inertial sensors in the probe track its orientation. Both plug into a PC or laptop, to provide real-time visualization of the sound in your environment.

“It’s like [Nintendo’s] Wii technology,” says Behm. “The system knows where you are. The tracking camera knows exactly where the probe is in space, and the probe knows where it is in space relative to the camera and the object you’re scanning.”

As you’re scanning the object, you actually see the sound appear on your computer screen in real time, in 3D. GM uses the SoundBrush to identify the sources of unwanted noise, as well as the path they travel to the driver and passengers. Once the noise is tracked down, GM uses sound dampening materials or—depending on the vehicle’s stage of development—design changes to reduce or eliminate it.

The Time is Right

LMS’ SCADAS XS is a 12-channel data acquisition system which, at 170x114x23mm, is about the size of an external hard drive. Battery-powered and portable, it’s intended as a grab-and-go replacement for a big, bulky multi-channel system.

“You don’t have to pick up the stuff, put it in a cart and push it places,” says GM’s Margaret Behm. “You just put it in your pocket and go. As a matter of fact, it comes with a little carrying case.”

Users can grab the XS, a few mics or vibration sensors, and jump in a vehicle with minimal fuss.

“[Engineers] want to be able to go out in a vehicle and assess the vehicle at that moment in time,” says Siemens’ Ian McGann. “What is the noise level? What is the vibration level?”

To better capture the experience, the XS comes with a headset with two built-in microphones to take binaural recordings. Later on, at your desk, you can play the sound back and it will sound exactly as it did when you were driving the vehicle.

“The tool has GPS,” says McGann. “If you hear any unwanted noise, you can find out where you were on the track when you heard that noise. Is there anything specific about the track there? Was I on the Belgian cobblestones when it happened? What frequency range was this noise? Was it at 3,000Hz? 1,000Hz?”

Sometimes, the noise’s frequency is sufficient to determine the source. Maybe that squeal matches the drive shaft’s rotational speed, or the 10Khz tonal noise corresponds to the air conditioning fan.

“If you can’t determine it using simple mathematics based on the speed,” says McGann, “then one next step may be to use SoundBrush to see where that noise is actually coming from.”

“A few years back, a bunch of companies came out with 3D acoustic cameras,” says Behm. “I looked at the one that was the most popular at the time. It was about $250,000.”

That, Behm decided, was just too much money. A 3D acoustic camera wasn’t going to help GM’s engineers that much, considering that there are plenty of much cheaper ways to locate the source and intensity of noise. Stethoscopes, for instance, cost a few hundred dollars at most.

“I consider the LMS Soundbrush tool a cheap version of that tool,” says Behm. “It’s faster to set up, it’s cheap, and it does the same thing with less complication. So, five years later, when I saw the Soundbrush tool come out at a reasonable cost, I could justify buying it, because it would help my engineers to communicate the issues that they found, and that would help them get the changes that they needed.”

Behm says users can show a picture to other engineers, suppliers or management, and communicate quickly what the problem is, where it is on the part, and what direction the sound is coming from to get necessary part changes. They can also use it as evidence to back up a business case to fund a necessary change.

“For instance, we just used it on a truck,” says Behm. “We were having sound entering the cabin, and we wanted to determine where the sound was coming from. We scanned the back panel, and not only could we find the path that the noise was entering, but could quantify the intensity of the sound and visually show that on a color map, to communicate that issue to the people who had to make changes for us.”

The SoundBrush’s two-camera motion tracking can become awkward when working inside of a vehicle. If the outside camera can’t see the probe, the system won’t work.

“This tool is much more conducive to doing stuff outside the vehicle,” says Behm. “There was one report that said once you get in the interior, it’s best to take out the seats. But once you’re taking out the seats, you’re wasting a lot of time, and the value goes down.”

But that doesn’t make it useless: GM has found uses for SoundBrush that LMS never foresaw.

“We write a lot of [Statements of Requirements] for acoustic materials such as dash mats and headliners,” says Behm. Vendors deliver hardware that they insist meets those requirements, GM builds the vehicle, tests it and … noise.

“If we assume it’s assembled correctly, and we assume it meets spec, then the engineers start chasing design changes,” she adds.

But what was it Mom used to say about making assumptions? “Sometimes,” says Behm, “we dig a little deeper and find out that what we thought was in spec wasn’t in spec and, if [the vendor had] met our specifications, we wouldn’t be chasing our tails on design changes. SoundBrush allows [engineers] to do a quick scan of, say, a dash mat, to make sure that we’re dealing with parts that are in spec, before we begin assembling the vehicle.”

If the parts don’t meet spec, despite the supplier’s claims to the contrary, GM can prove it more easily. Of course, you can’t use the SoundBrush on a truck rolling over a test track, but you can scan, say, a rotating drive shaft.

“We were doing a test on a prop shaft, trying to compare the intensity scan to the CAE mode shape,” Behm says. “So, real quick and dirty, they set up SoundBrush and did a scan of a prop shaft that was rotating at a constant 3,250 rpm. It matched up perfectly with the CAE mode shape, so that checked off another variable of concern: that your CAE model is telling you the right story.

“After that,” she concludes, “there was no further conversation questioning the model.”