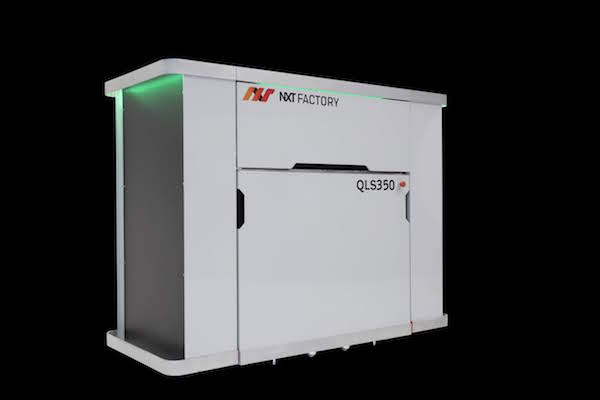 Gaining a foothold in the 3D printing industry can be challenging—there seem to be new startups every month. 3D printer companies need to be able to work quickly to design and manufacture equipment.

NXT Factory, which has developed a “quantum laser sintering” approach for printing thermoplastics at speed, leveraged Autodesk’s Fusion 360 platform to design its printer, collaborate with team members in multiple locations, and direct the production of the finished printer.

“We were able to improve our process for design, review and validation to the point that we built the machine from concept to a working machine less than four months.”

Founders Avi Reichental, Kuba Graczyk and Tomasz Cieszynski originally met via LinkedIn when Reichental was looking for potential partners and investors for his company. Reichental, a pioneer in the 3D printing industry who was once CEO of 3D Systems, convinced his two collaborators to relocate from Krakow, Poland, to California to launch the company.

The group selected Fusion 360 in part because the license for the software was free—Autodesk has set up a tiered system so that start-ups like NXT can take advantage of the toolset while directing their limited funds toward project development.

“One of the biggest challenges with any startup is overhead,” says Paul Sohi, Iconic Projects Lead and Fusion 360 evangelist at Autodesk. “With Fusion 360, you get everything from the core product for free until you pass the $100,000 revenue threshold. Reducing those costs in the early stages is very valuable.”

“On previous projects, we had also collaborated in small teams all around the globe, and we were looking for a tool that was easy to use for collaboration,” Graczyk says. “We also wanted to work simultaneously on assemblies and models, and Fusion 360 was the only system that provided those collaboration tools. We were able to improve our process for design, review and validation to the point that we built the machine from concept to a working machine less than four months.”

Reichental says that the software had an easy learning curve, and the designers were able to create even the most complex parts of the 3D printer and autonomous build chamber using the software.

The quantum laser sintering technology in the NXT QLS 350 printer is designed to accelerate selective laser sintering (SLS) printing by projecting layers simultaneously. A projection system splits the laser beam into millions of microlasers that can sinter an entire powder bed at once, according to NXT Factory.

The company claims the device provides a 4x improvement over traditional sintering processes, and is comparable to multi-jet fusion printers. The printer also includes a robotically guided print chamber for independent cool down and an autonomous depowering module.

“We wanted the utility and functionality of a complex, industrial-strength printer that could replace or complement an injection molding system,” Reichental says. “We wanted it to be industrial grade, and also be sophisticated and complex, while bringing it in at a price point that is about half the cost of a comparable system.”

Reichental adds that NXT wanted to the device to be user-serviceable to reduce downtime, as well as modular to accommodate future upgrades.

NXT is also using Fusion 360 to complete the final manufacture of the printer, sending final revisions and materials lists to the company’s manufacturing partners. “We are finalizing that transition and were surprised how well it works with other tools to take care of production, including automated supply orders,” Graczyk says.

According to Sohi at Autodesk, NXT represents the future of manufacturing, both in the technology they have developed and the approach they took to designing the printer. “They are really a flag bearer,” he says. “They are a team comprised of industrial designers and engineers working together, often remotely. The vision of Fusion 360 from the beginning was to consolidate data sets and expedite the process of creating things. It removes the pain points of jumping across tools that cater to specific manufacturing personas or roles. Using the same data sets, it enables people to work faster. NXT has taken something wildly complicated and added their own layer of complexity with the autonomous portion of the printer, and they were able to simulate and test it all inside of Fusion 360.”

“Using this platform helps achieve the most important objective of early stage companies (and mature companies too), which is time to market,” Reichental says. “We are increasingly under pressure to bring new products to market, and the products are getting more sophisticated. We don’t have the luxury of just hiring more engineers, so to have a productivity tool that is really targeted for smaller suppliers in this environment, that is priceless.”

NXT Factory showed off its printer at the Rapid+TCT 2019 show in Detroit, and is currently in the process of signing up resellers and early customers. “We plan to manufacture and ship between 16 and 20 systems before the end of this year,” Reichental says.