A team of 30 remains precarious in war-torn region

ODA launches a fundraiser to help colleagues in Ukraine 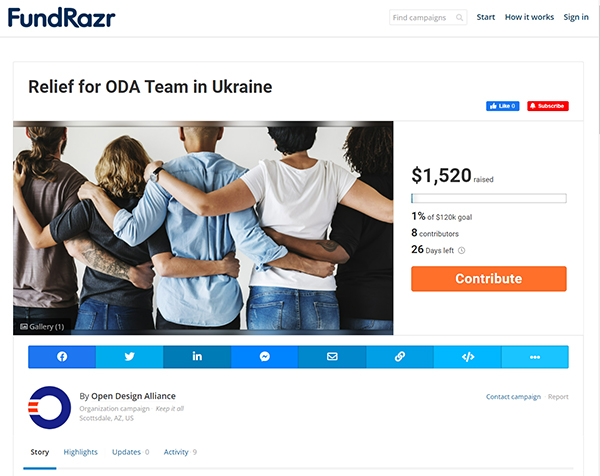 Open Design Allliance (ODA), a non-profit interoperability software developer and consortium, has just launched a fundraiser on Fundrazr to help its team affected by the Russian invasion of Ukraine.

“Ukrainian engineers play an important role in developing ODA technologies,” said Neil Peterson, ODA President, “including our interoperability toolkits for DWG and Autodesk Revit files, and many other areas. The situation today in Ukraine is dangerous and unpredictable. We’re supporting our team there with relief and relocation assistance, temporary housing—whatever they need to get through this crisis.”

ODA had a team of 30 developers in Chernihiv, roughly 3 hours by train from Ukraine's capital Kyiv. The team became part of ODA in 2016, according to Peterson.

On its fundraiser page, ODA wrote, “Chernihiv is currently under siege, with power and cell phone outages, water and food shortages, and daily artillery shelling. Travel is dangerous due to minefields around the city, damaged or destroyed roads, and armed combatants in the area. Part of our team has relocated to safer locations in western Ukraine or neighboring countries, in most cases taking only the clothes on their backs and a few papers. The remainder of our team is still in Chernihiv, waiting for an opportunity to evacuate.”

ODA plans to use the funds to cover the cost of temporary housing, emergency travel, equipment replacement and other expenses for the affected Ukraine team.

ODA's interoperability technology is licensed and used by many leading CAD software makers to ensure their products can read and write industry-standard DWG files. Its founding and corporate members include Autodesk, Dassaualt Systemes, Siemens, and Hexagon.

Within weeks of the invasion, CAD software, additive system, and workstation brands began leaving Russia. Autodesk and Ansys are among the companies that have pledged financial support to bring relief to the refugees from the crisis.