Industry insiders explain the difference between the two approaches.

Industry insiders explain the difference between the two approaches. 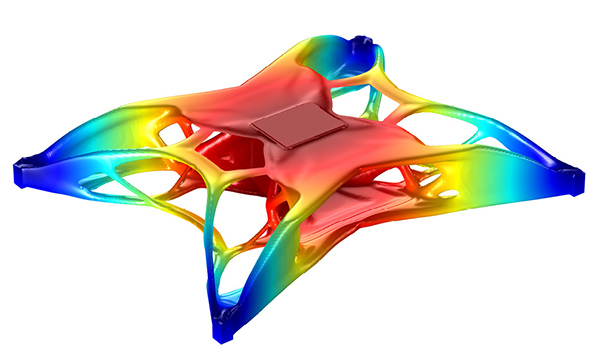 Topology optimization of a drone showing the displacement magnitude for one of the load cases. Image courtesy of COMSOL.

In certain stages, the geometry that results from generative design and topology optimization looks quite similar, for good reasons. Both approaches, as encapsulated in the design software packages with these labels, rely heavily on algorithms and known principles of finite element analysis (FEA).

Therefore, if the stress concentrations on a solid part are the same, the topological solution proposed by the software, whether generative design or topology optimization, will likely be the same. But most experts point out, increasingly, one approach is getting better at reconciling the mathematically ideal topology with the manufacturing requirements.

In its press announcement for 2012’s Inspire 9.0, Altair wrote, “Inspire 9.0 provides design engineers and architects with an intuitive environment that enables the exploration of structurally efficient concepts in the earliest phases of the design process.”

The rapid rise of generative design software has a lot to do with Autodesk, which began exploring the technology’s potential with Project Dreamcatcher.

Eventually, Autodesk would package Dreamcatcher’s components as generative design, and then in products such as Autodesk Fusion 360 and Netfabb.

A Hierarchy of Processes

In general, most industry experts think of generative design as the larger umbrella term, and topology optimization as one of the methods within.

“I think [of] topology optimization as one form of generative design,” says Uwe Schramm, chief technical officer at Altair. 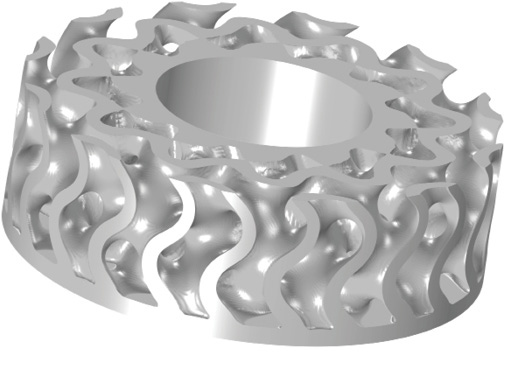 Generative design for a gyroid geometry with decreasing wall thickness in the z-direction. Image courtesy of COMSOL.

For many, generative design is the next phase in the evolution of topology optimization, a refinement of the technology with more automation. This matches Autodesk’s implementation of the technology.

“We give you the option to get Unrestricted topology in Autodesk Fusion when you do generative design,” says Wakefield. “That’s essentially topology optimization without manufacturing constraints.”

With the Unrestricted option in Autodesk Fusion, the topology you get is theoretically optimal based on algorithms and FEA results, but it may be impractical or impossible to manufacture. In contrast, the software will propose topology ideal for specific manufacturing methods if you choose it as a requirement.

“With topology optimization, normally you get a design approach, a proposal of where to add materials and where to remove them, but you may still need to work on it to finalize it,” notes Thomas Reiher, director of generative design, Hexagon. “With generative design, the goal is to get something that’s ready to use.”

Swearingen urges users to think of generative design as a design exploration tool.

“With generative design, you may ask the software for a design variant perfect for AM, another variant for casting and another for milling,” he explains. “You might be able to do that with some topology optimization software, but topology optimization is traditionally an analyst’s or expert’s tool.”

Topology optimization’s FEA-driven approach “comes at the cost of explicit control for the designer, making it difficult to prohibit things like the formation of internal voids, floating parts or structures that are too slender and thereby prone to buckling. It may also influence aesthetics,” says Jensen. “Alternatively, generative design is a bit less focused on performance and more on aesthetics and manufacturability, which are controlled through the generative design methods or algorithms.”

Schramm points out that in Altair’s implementation of topology optimization, it’s also possible to add manufacturing constraints as part of the optimization strategy.

“If you want to optimize a part for 3D printing, you care about AM constraints, so you want to look at overhangs and print direction, for example,” he explains. “These can all be formulated as topology optimization problems. You can even optimize for different manufacturing considerations: one for casting, another [for] 3D printing.”

The difference is in the degree of automation involved, which reduces the complexity for the users. The more automation it offers, the less the user needs to do to formulate the simulated event in numerical terms (as stress loads, pressure directions, joint types and mesh types). This has implications on the learning curve.

“Tosca from Dassault SIMULIA is for experts and analysts, but our generative design package makes the same workflow easier and it is intended for the designers,” says Swearingen. 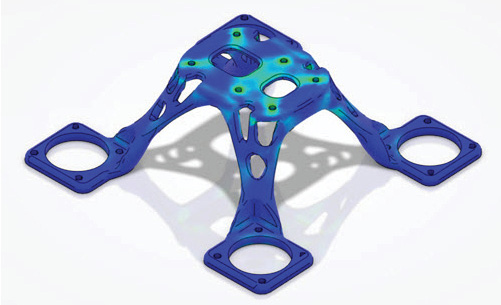 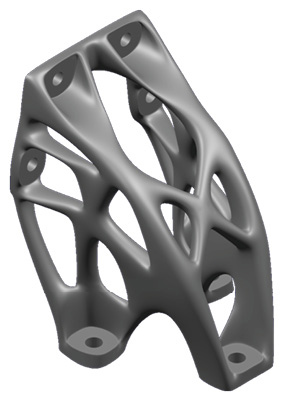 Similarly, for Hexagon customers, “it’s easier to learn generative design because you can ignore the mathematical formulas. Hiding the complexity is an accomplishment in itself,” says Reiher. “We do optimization quite differently. We do it based on stress, so you can use a certain stress level as the threshold not to exceed. MSC Apex generative design offers ease of use for people who don’t want to know the mathematics involved.”

“Emerging trends involve the combination of topology optimization with generative design as well as the use of the tools for applications outside the field of structural mechanics, such as heat transfer, CFD [computational fluid dynamics] and acoustics,” says Jensen. “Thus, there is a demand for flexible tools as well as prepackaged functionality for entry-level users.”

In the largely FEA-driven topology optimization packages from different developers, the software proposed topology, usually a mass reduction strategy, is bound to be similar because it’s determined by stress distribution and material characteristics.

But generative design packages function differently. Though almost all allow stress and mass reduction targets as inputs, the additional allowable parameters are not identical. Some products offer cost, carbon emission or manufacturing methods as parameters; others may not.

To Cut or Grow

The basic optimization strategy—especially in lightweighting projects—is to remove as much materials as possible without compromising the part’s strength. That means cutting away materials in the regions unaffected by stress loads, as the FEA results indicate. But there’s a weakness to this approach, according to Wakefield.

“Most software only removes geometry,” says Wakefield. “But with Autodesk Fusion, we are able to add geometry as well as remove it.” This makes a difference if you want to know, for example, the most economical way (in terms of material usage) to connect two disparate mechanical components.

Hendrickson says users can set up multiple optimization sessions using the high-end Ansys Mechanical software, powered by on-demand cloud resources from Ansys Cloud. “Users might think of it as generative design but we don’t market it as such,” he says. 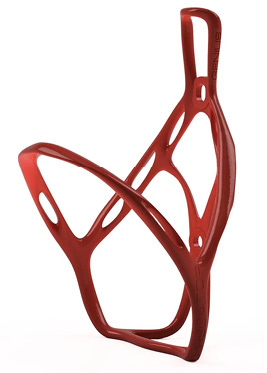 Similarly, Autodesk allows Fusion 360 users to use cloud credits (purchased separately from the software license) to speed up generative design sessions. Hexagon’s MSC Apex Generative design and Altair’s OptiStruct are parallelized, and therefore can be accelerated with distributed computing.

An appeal of generative design is that the software can offer scores—even hundreds—of design options. This is especially true of cloud-powered generative design software. But the more, the merrier doesn’t necessarily apply here, cautions Reiher.

“If you get too many results, it makes it harder for the engineers to determine which is the best one. They will be overwhelmed,” he says. “Most likely they will throw away most of the answers. It’s a waste of computing power.”

Engineers have lately turned to lattice structures for lightweighting parts. The complex nodes and beams support one another, offering strength. Yet, it remains porous, weighing much less than the solid part it replaces.

But such designs are nearly impossible to model manually in typical 3D CAD software. The best approach is to use a program or algorithm to automatically generate them. Generative design offers tantalizing possibilities to explore efficient ways to model lattice fills.

“Some software uses precook lattice forms to fill a volume, but that’s not optimal design,” warns Schramm. “If your lattice structures are in the wrong orientation, you don’t get optimal resistance for your stress loads.”

For the most part, generative design packages have evolved to include manufacturing constraints, allowing engineers to limit the design options to only those suitable for their desired manufacturing method. In some, you also may use cost and carbon emission as input, which gives you a way to stay within your budget and explore greener products. However, certain design criteria may never be automated.

“The aesthetic element of design is not quantifiable or constant over time, so it is somewhat incompatible with topology optimization, yet aesthetics is the primary consideration for many design problems,” observes Jensen.

“The aesthetic appeal of the shape, for example, is not something we can quantify as a set of parameters,” Hendrickson adds.

Often, the judgment is based on the engineer’s own personal views and his or her understanding of the marketplace. This led Hendrickson to propose engineer-in-the-loop generative design.

“This is where the engineer is changing the inputs, learning from the output topologies, and reiterating. Think of it as the software working hand-in-hand with the engineer,” he says.

Generative design and topology optimization have become well-established industry terms; therefore, users should be able to expect certain things from software marketed under these labels. But rather than relying on the term, it’s best to test out the software to see if it’s a good fit for the project.

“We used to call topology optimization morphogenesis in our old website,” says Schramm. “It didn’t stick.”