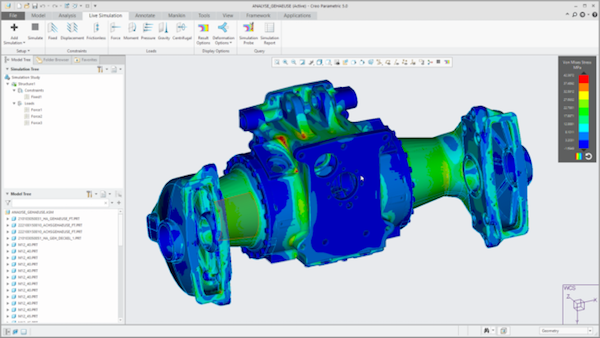 PTC Creo Simulation Live enables product designers and engineers to run an analysis with a single click, quickly visualizing the effect of changes they make to their designs. Image courtesy of PTC.

The tools available to today’s design engineers are mind-boggling. It can be tempting to stick with what works, rather than spending time evaluating new hardware and software that might help optimize your engineering workflow. Of course, that means you will be left behind as more capable solutions are introduced and implemented, resulting in a competitive disadvantage for your company versus your competition.

Simulation is a prime example of this “stay-in-your-lane” mentality. For decades, setting up and running a simulation or analyzing the results has been the purview of specialists. While that is still true for most advanced computer-aided engineering (CAE) simulations, there are other types of simulation use cases being held back by the “expert-only” culture surrounding simulations.

Interactive design exploration is one such use case for simulation. It’s a fairly new concept, driven by massive core counts available in graphics processing units (GPUs) and new software designed to take advantage of the GPU’s parallel processing capabilities. ANSYS Discovery Live and PTC Creo Simulation Live, which is powered by ANSYS, represent a new way of thinking when it comes to simulation.

The concept-stage simulation software taps into NVIDIA GPUs to make design and simulation an interactive experience. You can manipulate geometry, material types or physics inputs, then instantaneously see changes in performance. They’re not tools intended for simulation analysts to do critical safety checks or compliance audits. They’re made for design engineers to explore different ideas and discover new ways to optimize designs in real time.

Dassault Systemès SolidWorks uses GPUs to process topology optimization. This image shows using an optimized shape as a reference overlay for use with an existing design. Image courtesy of Dassault Systèmes.

Rendering is another area that was once a click-and-wait process. That’s no longer the case. “Two years ago, a photorealistic rendering on a typical entry-level workstation might have run for three hours,” says Chris Ramirez, strategic alliances manager for Dell Precision Workstations. “Now with real-time rendering and denoising, it is nearly instantaneous.”

SolidWorks and several other CAD and image processing software products have added support for NVIDIA’s new AI-based denoising technology, which reduces the “grainy” look in images, and does it quickly.

“SolidWorks Visualize can create 10 times as much content in the same amount of time,” Brian Hillner, the senior product portfolio manager for SolidWorks Visualization at Dassault Systèmes, told DE in June. “A set of product images that once took months to render with complete fidelity and no noise can now be created in weeks or days. It means more options and opens the door to complex rendering of scenes for virtual reality “and other ways to make the product shine. Users are shaving months off design because they can see photoreal views in real time,” he adds. 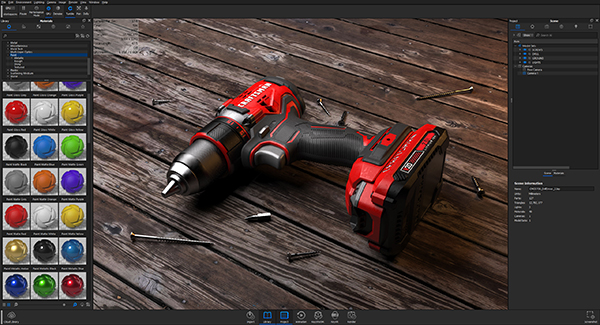 Just last month, Luxion, makers of the popular KeyShot rendering software, announced that KeyShot 9 will bring CPU and GPU accelerated rendering capabilities together in such a way as to provide 3D professionals complete control and a choice over what powers their rendering workflow.

“Less than a year ago we introduced NVIDIA RTX and momentum for real-time ray tracing continues to grow,” said Greg Estes, vice president corporate marketing and developer programs at NVIDIA in a press statement. “We worked closely with Luxion on OptiX integration to make real-time ray tracing on the GPU possible. Now KeyShot users have more options to interactively create amazing, photoreal visuals faster and easier than ever before.”

Henrik Wann Jensen, co-founder and chief scientist at Luxion, said Luxion has been evaluating GPU rendering for several years. “With NVIDIA’s RTX technology, GPU-accelerated hardware ray tracing and AI denoising, gigaray performance, GPUs with over 8GB of memory, and the free OptiX SDK, now is the time to do it,” he said.

Get Out of Your Lane

Today’s design engineering “lanes” are shifting. Simulation, design and visualization are merging thanks to new products that tap into the increased speed, memory and graphics capabilities of workstations. The accelerated workflows that these systems create can enable simulation experts to shift their focus to larger, more complex tasks. What might be slow to catch up is a company culture that maintains the status quo of siloed design, engineering and simulation. If those disciplines aren’t merging in your workflow, chances are you’re being left behind.