PENSA’s Path to Prolific Prototypes Starts With the MakerBot METHOD

The industrial-grade desktop 3D printer is used by the design and engineering shop to test new ideas early and often and helps accelerate the design cycle.

The industrial-grade desktop 3D printer is used by the design and engineering shop to test new ideas early and often and helps accelerate the design cycle. 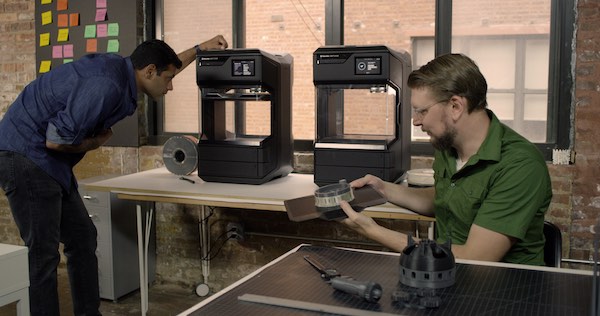 PENSA, a full-service design and engineering shop, is no stranger to 3D printing. Having leaned on a roster of industrial-grade 3D printers over the years primarily for late-stage validation, PENSA is now enlisting the technology throughout each stage of the process, especially early on as a way to quickly separate flawed concepts from workable designs.

PENSA, which has developed products for OXO, Bayer, D.I. Wire, and OneBlade, historically had been stymied in its use of 3D printing, caught between industrial units, which were reliable, but too costly and complicated for everyday use, and desktop offerings that were less expensive, but lacking in performance and reliability, according to Marco Perry, co-founder of PENSA. Enter MakerBot’s new METHOD, touted as a performance 3D printer that bridges the gap between desktop and industrial 3D printing. The METHOD’s dimensional accuracy and high-speed output, coupled with its reasonable price point and relative accessibility, enable the PENSA team to be far more uninhibited in testing new ideas early and often in order to accelerate iteration cycles.

“Since we are working on physical products and their interfaces, the sooner we can get into 3D mock-ups, proof of concept models, and high-fidelity prototypes, the sooner we can evaluate whether an idea is worth pursuing,” Perry says. “This keeps us from working on concepts that show little promise in testing and focuses the team on ideas that can be optimized. Everything looks good on paper and even better in CAD, but there is nothing like holding an object and testing it to see if it’s a good idea or not.”

With METHOD now firmly integrated into its daily design process, PENSA product development teams are tapping 3D printing for an array of use cases, including for form studies, volume studies and functional testing as well as to print fixtures or end-use parts. METHOD’s soluable supports allow printing of designs not possible with some 3D printers, and its low cost-per-print means the team can use 3D printing for far more than testing fit and finish, but to run through iterations in a fast cycle as well as to consistently check for functionality, ergonomics and mechanics.

“As the cost of prototypes goes down, the less we think about whether a model is worthy of spending time and money on its fabrication,” Perry says. “Before you would prototype the final design and see what it looks like just before production, but if the print is cheap, then you get to see what it would look like during every iteration of the creation process.”

In addition to METHOD’s industrial-grade performance, the printer’s reliability is key to making it an integral part of routine product development workflows, Perry says.

Moving forward, he would like to see enhanced material options for METHOD so the team could simulate near-production quality of parts. “If we spend a lot of time messing with settings or tweaking and servicing the tools we use, we aren’t spending that time into productive uses of the tool,” he says. “With METHOD’s reliability and performance at a prosumer price, we have a sweet spot for our rapid iteration design process.”