This P-series mobile workstation provides the perfect combination of performance, portability and price.

This P-series mobile workstation provides the perfect combination of performance, portability and price.

While attending SIGGRAPH 2018 in Vancouver, Canada, I got my first look at the Lenovo ThinkPad P1, the newest addition to the company’s ThinkPad mobile workstation portfolio. Considering a wowing initial glimpse, I was understandably excited when a P1 arrived for testing. The ThinkPad P1 is Lenovo’s thinnest, lightest and sleekest mobile workstation to date, packing plenty of power into a package aimed squarely at engineers and designers. 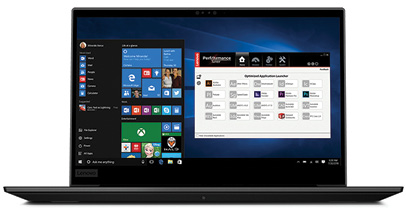 Raising the lid reveals a 15.6-in. display and a new seamless keyboard with 84 mostly full-size keys. Two levels of backlighting can be toggled by pressing the Fn key and spacebar. Although the P1 lacks a separate numeric keypad (thus reducing size and weight), the new keyboard retains the excellent feel and response we’ve come to expect from Lenovo.

A round power button is located to the upper-right of the keyboard and a 4.0x2.75-in. touchpad with three buttons is centered below the spacebar. There is also the familiar red Lenovo pointing stick nestled between the G, H and B keys. The caps lock key has its own LED, as do the keys dedicated to the speakers, microphone and function lock. There is also a fingerprint reader to the right of the keyboard. 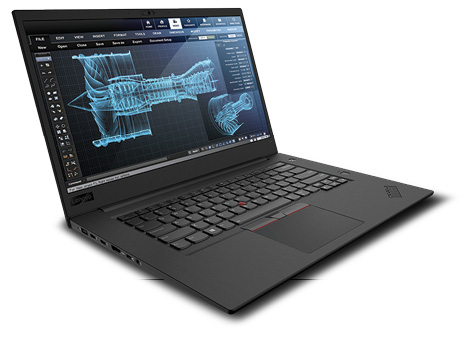 A narrow bezel surrounds the display panel, yet still provides space above the panel for a 720p HD webcam and microphone. Lenovo offers a choice of two in-plane switching anti-glare display panels: a 2K 1920x1080 full high definition display with a brightness of 300 nits and a 72% color gamut or a 4K 3840x2160 ultra high definition (UHD) multi-touch display with a brightness of 400 nits, capable of displaying 100% of the Adobe color gamut. Our evaluation unit included the 4K display, which added $400 to the price. Models equipped with the 4K UHD touch display are also automatically upgraded to an IR 720p camera, which adds an additional $45. The 4K display was nothing short of stunning and its touch capabilities were very responsive. 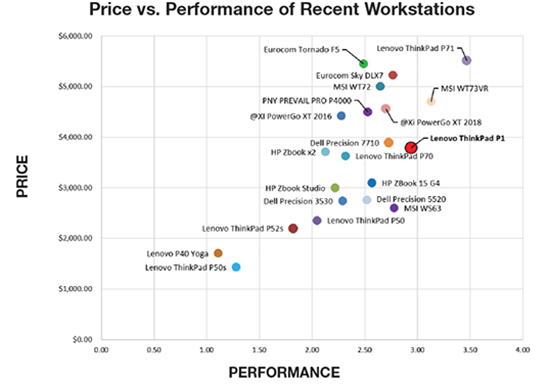 For ultimate performance, you can get a ThinkPad P1 equipped with an Intel Xeon E-2176M vPro six-core processor, which was included in the system we received. This 2.7GHz Coffee Lake CPU has a maximum turbo speed of 4.4GHz, a 12MB cache and a 45-watt thermal design power (TDP) rating.

All the available CPUs include Intel UHD Graphics P630, but all models of the ThinkPad P1 also include a discrete NVIDIA Quadro GPU as well. Although some pre-configured P1 systems include a Quadro P1000, all the customizable configurations come with an NVIDIA Quadro P2000 graphics card. This GPU includes 5GB of GDDR5 memory. With 1,024 compute unified device architecture cores and a 160-bit interface, the P2000 delivers a bandwidth of up to 140GB/second.

The base system includes just 8GB of memory, but the ThinkPad P1 provides two memory sockets and is available with 8, 16, 32 or 64GB of RAM. Our evaluation unit came with 32GB of DDR4 2666MHz memory, installed using a single memory module. Although this costs a bit more than purchasing two 16GB dual in-line memory modules (DIMMs), it allows you to add more memory in the future. 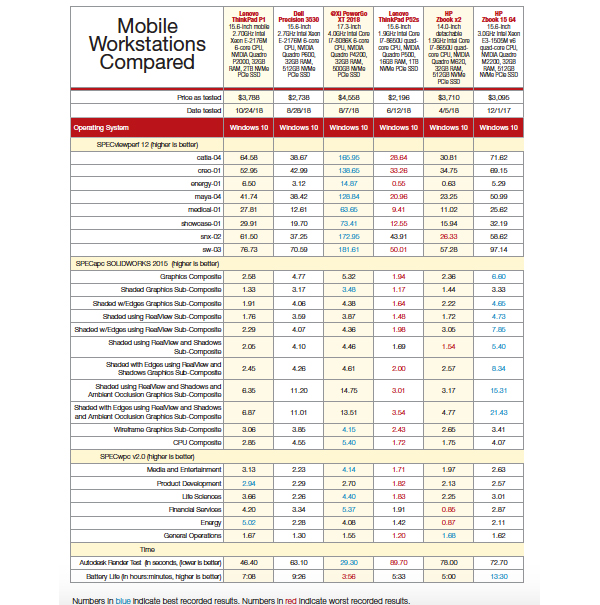 All Lenovo ThinkPad P1 models include a PCIe-NVMe OPAL 2.0 M.2 solid-state drive and can support up to two drives. Choices include the 256GB drive included in the base unit as well as drives of 512GB, 1TB and 2TB. The 2TB drive in our evaluation unit added $675. P1 systems equipped with two identical drives can also have those drives configured in a RAID0 or RAID1 array for no additional charge.

Considering the size of the ThinkPad P1, Lenovo has managed to provide an assortment of ports. The right side provides space for an optional smart card slot (a $10 add-on) as well as an SD card reader, a pair of USB 3.1 ports and a Kensington lock slot. The left side includes a combo headphone/microphone jack, a mini gigabit Ethernet port for use with an included RJ45 dongle, an HDMI 2.0 port, a pair of USB Type-C Thunderbolt 3 ports and the connection for the external power supply.

All Lenovo ThinkPad P1 systems include an Intel 9560 802.11AC vPro (2x2) wireless adapter with Bluetooth 5.0 and a 4-cell Li+Polymer 80Whr battery, which kept our system running for 7.13 hours. The system remained cool and nearly silent throughout our tests, even when under heavy compute loads.

We’ve come to expect Lenovo workstations to deliver excellent performance. Although that wasn’t entirely the case when we looked at the P52s last September, the ThinkPad P1 definitely lived up to our expectations.

On the SPECviewperf benchmark, which focuses on graphics, the Lenovo ThinkPad P1 turned in excellent results, with scores commensurate with its powerful mid-range NVIDIA graphics. The results on the SPECapc SolidWorks benchmark also placed the P1 among the more powerful 15.6-in. mobile workstations we have recently tested.

The Lenovo ThinkPad P1 also performed very well on the SPECwpc workstation benchmark. Its scores in each category again placed it among the best-performing mobile workstations in its class, and the P1 even turned in the best result to date on one of the individual tests. And although its average time of 46.4 seconds to complete our AutoCAD rendering could not beat the 29.3-second mark set by the @Xi PowerGo XT we recently reviewed (DE, November 2018), it proved to be the second fastest time we have ever recorded for a mobile workstation.

Although all ThinkPad P1 workstations come with Windows 10 pre-installed, if you opt for an Intel Core CPU, you have a choice of Windows 10 Home or Professional (which adds $30). Systems based on the Intel Xeon processor automatically include Windows 10 Pro for Workstations.

Other optional accessories include a USB Ultra Dock ($180) with a DisplayPort and additional USB ports, and a Thunderbolt 3 workstation dock ($336) offering an even broader assortment of ports and capable of driving up to three 4K displays. For systems equipped with a touchscreen, Lenovo also offers the $60 Lenovo Pen Pro, a Bluetooth-enabled active capacity pen with two side buttons and 4096 levels of pressure sensitivity. Both the pen and Thunderbolt dock are worth considering.

The standard warranty covers the system for just one year, with depot or carry-in service. Additional coverage is available at the time of purchase that can extend the warranty for up to five years.

The $3,788 price as tested for our evaluation unit (after an automatic 10% online discount) includes $69 to extend the standard warranty coverage to 3 years. Other warranty options include onsite repairs and premier support for one to five years. Lenovo also offers accidental damage protection and battery replacement warranties.

As you would expect, the Lenovo ThinkPad P1 is independent software vendor certified for a wide range of applications from Autodesk, Dassault Systèmes, PTC and Siemens. It has also passed military certification tests and other quality checks to ensure it can perform in extreme conditions. After spending time with the Lenovo ThinkPad P1, we think the configuration we received offers engineers and designers just the right combination of performance, portability and price.