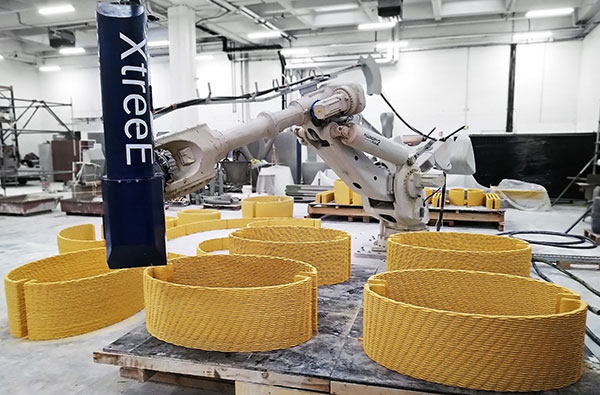 An emerging 3D printing trend is the technology’s capability to print larger forms and even architectural structures that can fabricate affordable housing, large shapes and parts.

As 3D printing advances, users learn from experience and gain insight regarding scale of design—how it can help or hinder a project, but also how designers can plan better to avoid future problems with 3D-printed forms.

Heinsman views 3D printing as a modern craft, one that must be mastered.

“Large-scale 3D printing is complex, and therefore we like to make it easy for designers,” Heinsman says. “We offer configurable interior products and architectural elements, as a kind of design algorithm, that enables the designer to create their own unique product version within given fixed parameters. In some cases, we also create entirely new products in collaboration with designers, and then we take care of most of the digital design, engineering, creation of production files and printed prototypes.”

Part of mastering the technology is realizing how many factors can go into one print.

“3D printing is highly dependent on material choice, printer quality, geometry optimization and environmental parameters such as temperature, humidity, impurities and dust,” says Hans Hansen, CEO of Brand 3D. “The top print services companies, such as Shapeways have large, encapsulated print cabinets with climate control and other expensive features. Other print services providers, such as [Hubs], are typically less expensive, but suffer from the above-mentioned shortcomings.”

Nihal Velpanur is a product manager at PTC. He says the goal of 3D printing is that teams can manufacture the same design anywhere across the world with the same quality, dimension and finish.

“This sort of repeatability is necessary if 3D printing wants to disrupt the current global supply chain and distribution and truly ‘democratize’ manufacturing,” says Velpanur. “In order to achieve this, there are strict certifications that need to be maintained, there [are] process controls and monitoring that need to be in place and there [are] standardizations in terms of print parameters and environmental conditions that need to be upheld. While we’re on the way to achieving this, there’s still a long way to go.”

3D printing comes in many forms, from small maker-style devices to large systems used in the construction industry. However, the bulk of commercial 3D printing systems are small, ranging from desktop models to larger units the size of a walk-in closet. 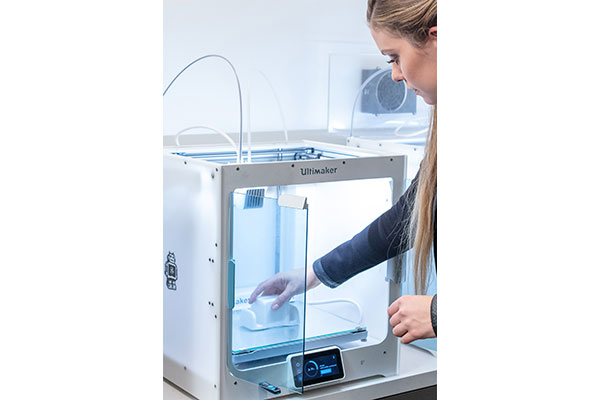 “From that standpoint, design considerations play a crucial role in the 3D printing process due to the size limitations of the printer’s build area,” says Dick Anderson is the senior vice president of manufacturing for Stratasys. “Although printers have finite build areas, it does not mean that the final form of the printed part has to fit within those confines. Instead, creative designers and engineers section large structures into multiple pieces, each built separately in the 3D printer. Then the parts are assembled to form the final product.

“That said, this approach requires attention to how the individual parts will be joined, which should be accounted for in the design of each piece,” he adds. “This adds complexity to the design and impacts post-print readiness due to the required assembly.”

A benefit of additive manufacturing and 3D printing—at different scales—is the economy they afford.

“The additive nature of 3D printing is one of its fundamental benefits,” says Anderson. “Material use is optimized because only the amount needed to complete the form is consumed. That’s in contrast to a subtractive process like machining, which results in raw material waste, adding to the overall cost to produce. This principle is magnified as structures become larger.”

Anderson adds that 3D printing is optimal for uses such as construction and large-structure applications. Affordability and cost control are challenges that affect the housing and building industry. 3D printing has been shown to reduce costs relative to traditional building methods, offering a more efficient alternative to conventional means.

Time savings is another benefit of 3D printing, according to Anderson. “This is because it requires no tooling to produce an object, unlike traditional fabrication methods that rely on fixtures and molds that have to be made, increasing overall time to part. Structures 3D printed with an extrusion process offer a timely solution when fast construction is needed for purposes like emergency shelters.”

3D printing large components can be more cost effective in some cases because of the high cost of tooling.

“In cases where quantities are only in the hundreds, avoiding tool utilization is a major advantage,” says Haleyanne Freedman, global engineering market manager for 3D printing and additive manufacturing at M. Holland. “Prototyping large components is also costly. Stabilizing polymers in large-format printing was previously a challenge, but advancements in the technology over the last 5 years, and the launch of open platform extrusion systems in large format, enabled a broader selection of applications able to be printed.” 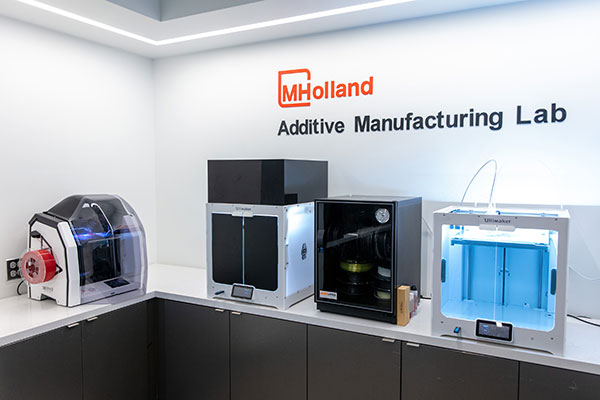 With tech advances, and the launch of open-platform extrusion systems in large format more applications can be printed. Image courtesy of M. Holland.

Freedman adds that 3D printing large components is growing in appeal—because it’s been impractical for so long.

“Manufacturers of large components already have incredibly high costs for prototyping and general fabrication, so opening the ability to produce with 3D printing will reduce costs and broaden the application scope of the technology overall,” she says.

Printing large structures also requires logistical planning. If the printed structure is to be fabricated in one location and transported as a whole or in modular sections, and then transported to another location, there are significant logistics involved.

“We fully believe in prefabricated production in smaller 3D print hubs near big cities, for instance,” says Aectual’s Heinsman. “Prefab construction in general results in a faster building time on site, less fuss at the building site and less hindrance for neighbors.”

According to Heinsman, a great advantage of having XL 3D printing hubs near large construction sites is that it enables local prefabricated production and on-demand production and is less dependent on overseas shipment of large parts.

“During the pandemic, we were able to deliver on time throughout Europe from our production facility in Amsterdam, whereas loads of conventional furniture and finishes suppliers for instance were waiting for shipments to arrive from Asia,” Heinsman explains.

The new wave of large-scale printing, however, along with all the logistics needed to support it, opens up new avenues to create and fabricate shapes, forms and products never thought to be possible.

Tip of the Iceberg?

Thomas Reisinger is the head of technology and portfolio in general industry at ABB. He says we have only seen the beginning of 3D printing and robotic prefabrication adoption in the construction industry.

“With the industry facing a perfect storm of megatrends including the need to build homes more quickly to meet rapidly growing urban populations, growing shortages of skilled and unskilled labor, a trend towards mass customization and the need to build more sustainable and energy-efficient homes, the adoption of automated technologies is likely to increase, with robots already being trialed in a growing number of projects worldwide,” Reisinger says.

Reisinger adds that with waste recognized as a major problem in the construction sector, the improved precision offered by automation also has the potential to help the industry to clean up its act. Using 3D printing for concrete structures has the potential to minimize waste by ensuring that the precise amounts required are accurately and consistently applied at the correct level of quality.