The freedom to prototype and create is a key tool of design thinkers. 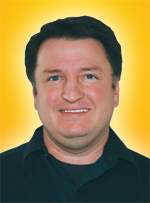 Every day, many of us do the same basic types of tasks. As we often highlight in Desktop Engineering, there are amazing advantages to using technology to complete those tasks faster and better. However, there is a danger in focusing on improving the efficiency of the routine: It’s easy to get into a rut.

Innovation comes from designing a new and different way for people to interact with the products you’re modeling and simulating. To do that requires empathy for the end users of the product, according to David Kelley, a former engineer and founder of IDEO. Kelley’s global design firm is famous for its human-centered approach, dubbed “design thinking.” The approach, which Kelley teaches at the “d.school” Hasso Plattner Institute of Design he created at Stanford University, considers what people need, what technology is capable of doing and how the design can succeed from a business standpoint.

If a picture is worth a thousand words, what is the value of a prototype when it comes to sharing your ideas, collaborating on a particular project or understanding how people will interact with a design? The book Creative Confidence: Unleashing the Creative Potential Within Us All, which Kelley wrote with his brother Tom, illustrates that value via several examples. Tom Kelley is an IDEO partner and the author of the best-selling book The Art of Innovation. Their thoughts on design thinking might challenge your definition of prototyping.

“We often build physical prototypes. But a prototype is just an embodiment of your idea,” they write in Creative Confidence. “It could be an array of Post-its to simulate a software interface. It could be a skit in which you act out a service experience, such as visiting the emergency room at a hospital. Or it could be a quick version of an advertisement describing a product or service or feature that doesn’t yet exist.”

If you have trouble convincing your bosses that you need a 3D printer or desktop milling machine to help you develop better products, maybe they’ll change their tune when you start reserving the conference room to act out skits. Whether through traditional or more unconventional means, the freedom to prototype and create is a key tool of design thinkers. In fact, the Kelleys call it the “best way to make progress toward your goal.”

That freedom is not something every organization supports, even if it’s inadvertent, which tends to permeate a company’s culture to the point of diminishing design confidence and therefore efficacy. In a live video chat from the d.school about his book, David Kelley said he has seen people at IDEO who were insecure or defensive about their creativity, which kept them from being effective and limited their ideas.

“(Creative confidence) means you’re no longer afraid of being judged by your peers that you’re doing something that doesn’t make sense or it’s too grandiose,” he said. “You stop that voice inside of your head that’s judging you because you have this confidence.”

The culture at IDEO was obvious when, earlier this year, I heard the company’s president and CEO Tim Brown speak at the 2013 South by Southwest conference in a session called “The Future of Making.” One example of design thinking he shared focused on a project by Neri Oxman, a professor at the Massachusetts Institute of Technology’s Media Lab and an internationally recognized artist. The SpiderBot being investigated by Oxman and her research assistant Benjamin Peters in MIT’s Mediated Matters group uses a web of cables to hoist and move extrusion devices to place material where it’s needed on a large scale. It is a prototype for a very large 3D printer, but it’s also something more.

“She’s working on an art exhibit now, that actually the extrusion devices are lit by LED lamps and they slowly place things,” Brown said. “It’s a design exploration as much as it is a fabrication exploration.”

Getting out of the routine to think big doesn’t mean you need to create a prototype that fills a room. A rapid prototype is a simple way to jumpstart design thinking. It can help you get an idea across, understand how people will use a product or see how a part really fits into a system. You don’t need to be an artist to create one, either. In fact, if you think of yourself as an analyst or an engineer or a manager, and not as a designer, as David Kelley did early in his career, you may be missing the inspiration to create the next big thing.