I awoke in the gloom of predawn, kissed my wife goodbye and set off to the airport. My trip to Atlanta went smoothly and before I knew it, I arrived at the Hyatt Regency Atlanta, site of RAPID 2012. Sadly, I arrived just in time to find out all the early workshops were full.

Undeterred, I went to my room and waited for the later sessions to begin. Maybe I took a nap in there somewhere. I won’t tell if you don’t. That afternoon I sat in on SME’s Rapid Technologies & Additive Manufacturing (RTAM) Community Tech Groups program. The “Conference Kickoff” was dedicated to innovations in additive manufacturing (AM) and I heard plenty to interest me. 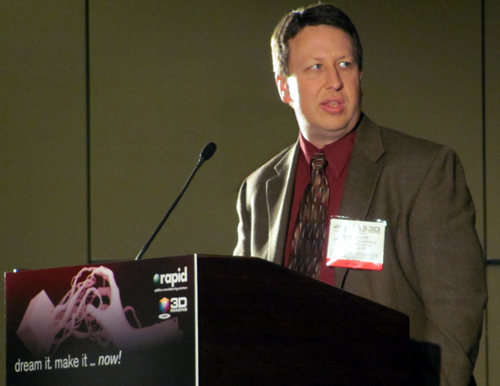 The field of 3D imaging was covered in broad strokes, covering topics such as industrial CT scanning, dental imaging (which is quickly becoming a field all its own), human body imaging (prosthetics, custom-fit clothes) and large scale scanning (like, entire building large). The Kinect received a brief mention as a commonly available 3D imaging tool, along with consumer photogrammetry (that would be using digital cameras to produce 3D images).

Other topics of interest included medical applications, education, industry updates, a look at the European market, a concerted effort to standardize process terminology and a materials overview. If it seems like I’m skimming here, never fear. I’ll be posting a more in-depth look at some these topics in the near future. 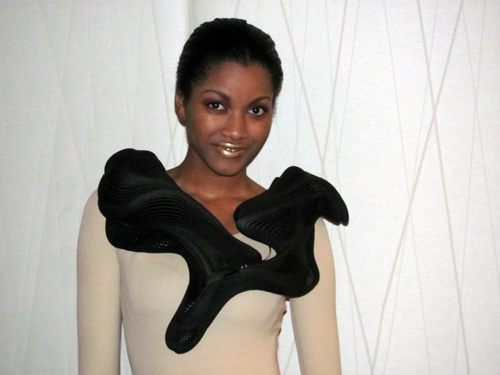 After the RTAM program, RAPID kicked into party mode with a 3D printed fashion show, sponsored by Materialise. Attendees were treated to a number of 3D printed creations, including hats by milliner Elvis Pompilio, necklaces by Daniel Widrig and some truly interesting accessories by Niccolo Casas.

Tomorrow sees the opening of the exhibition hall, along with a keynote speech by Terry Wohlers and the U.S. premiere of Mcor Technologies. Check out Rapid Ready tomorrow for day two coverage of RAPID 2012.

I’ll leave you with a short video about the DARPA prosthetic arm that was created using AM.