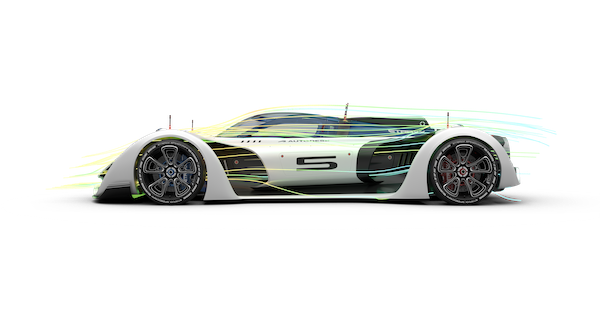 “The way we design has completely changed. You’re not just looking at the mechanical parts, electrical components, and software, but you’re looking at them altogether. So being able to do that in an integrated fashion is important,” noted Hamilton.

Autodesk Fusion 360 exemplifies this workflow. On day two of the conference, Jeff Kinder, Executive VP of Product Development and Manufacturing Solutions, Autodesk, announced, “Industry-leading Ansys simulation technology is being integrated into Fusion 360 to power a new extension that will quickly provide useful insights about printed circuit board (PCB) signal quality as a part of the board design process.” This, he added, signifies an expansion of Autodesk’s partnership with Ansys. SOLIDWORKS, part of Dassault Systèmes, also offers integrated PCB design tools.

The rise of digital twins, and the use of Augmented Reality (AR) and Virtual Reality (VR) devices to interact with them, also demands more compute capacity and a larger memory footprint. The workflow is typical in automotive, where car makers use GPU-accelerated visualization packages such as Autodesk VRED to scrutinize the digital prototypes’ surfaces and crevices for aesthetics. The French transportation firm Alstom uses VRED with NVIDIA GPUs to visualize its locomotive designs.

“With NVIDIA RTX™ and VRED GPU raytracing, we are able to achieve a significant performance increase over CPU ray tracing, accelerating our renderings from minutes to milliseconds,” said Fabien Normand, Alstom’s VR specialist. “With RTX scalability and Autodesk VRED, we can now spend less time optimizing our models for raytracing performance and more time designing. The results look amazing on our 32-million-pixel stereoscopic power wall.”

In Dell’s desktop, mobile, and data center products, NVIDIA RTX GPUs provide the necessary graphics power for raytraced visuals with real-time response. It provides graphics memory up to 48GB for those working with large assembly models.

A recent eBook from Jon Peddie Research on GPU-acceleration in CAE features the performance benefits of running simulations on GPUs.

The primary means of interacting with Omniverse is through ‘connectors’, Iyer explained. “Connectors are bi-directional, meaning the data can go to Omniverse and back. This is happening in real time,” he said. “If you make a change in Autodesk Revit, the Omniverse user gets a notification alerting him or her that things have changed. Changes in Omniverse are automatically communicated to the Revit user as well.”

For real-time interactive workflows, the workstation’s CPU core count and GPU memory are critical, Hamilton explained. “Maximizing CPU clock speed (GHz) provides the best experience during the manipulative portion of the creative process [3D modeling tasks in CAD, for example],” he said. For visualization, analysis, and rendering, the GPU offers a significant performance boost, he added.

“When you’re spinning around the model, looking at it from different angles, or walking through a virtual building—that’s when you’re putting a lot of computing workload. This is where the GPU’s memory speed and sequential storage performance are important,” said Hamilton. “For multi-threaded computational work, like rendering and simulation, you use as many cores as possible, both CPU or GPU cores, because these workloads are ideal for parallelization.”

Real-time response is important to creative workflows as “your productivity starts dipping with anything taking more than half a second,” said Hamilton, citing “The Economics of Rapid Response Time,” an IBM paper by Walter J. Doherty and Ahrvind J. Thadani.

According to the paper, “Rapid system response time, ultimately reaching sub-second values and implemented with adequate system support, offers the promise of substantial improvements in user productivity. IBM and others have verified this and demonstrated that lower unit job costs can result.”