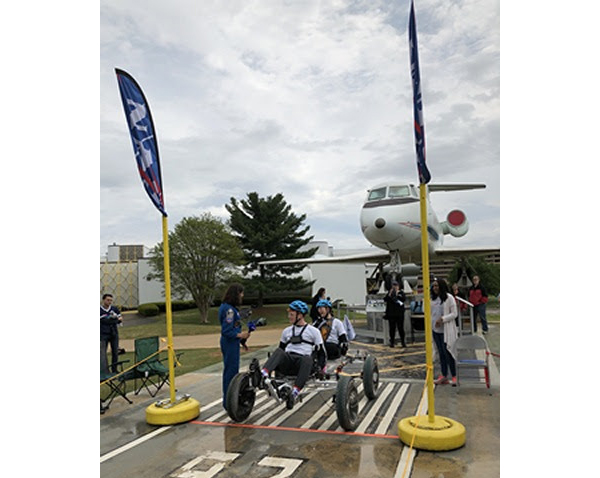 The Saint Thomas Academy Experimental Vehicle Team (EVT) placed second overall, and first in the U.S., in the high school division of the NASA Human Exploration Rover Challenge. The team tied for first with a European Space Consortium for high school students worldwide but then lost the tiebreaker.

In addition to its performance completing the course and mission tasks (video), the team earned:

The NASA Human Exploration Rover Challenge is an engineering design competition in which teams design and assemble a vehicle capable of traversing the simulated surface of another world and facilitating mission-objective tasks such as gathering environmental samples of the extraterrestrial terrain. This is the team’s first time competing in the annual challenge, which is held at the U.S. Space & Rocket Center in Huntsville, AL.

“Entering a new competition every few years is always exciting,” Team Adviser Caroline Little says. “The students get to experience the engineering design process from beginning to end. Watching their project grow from scratch work on paper to a NASA rover being raced at the U.S. Space and Rocket Center is very rewarding for a teacher.”

The multifaceted competition awards points based on the team’s ability to assemble its rover in the allotted time; designing a rover that is lightweight; successfully completing course obstacles; performing tasks throughout the mission; and meeting pre- and post-challenge requirements. The challenge’s weight and time requirements encourage compactness, light weight, high performance and efficiency.

As part of the competition—before their first time on the course—rover entries are tested to fit into a lander equipment bay, a maximum 5x5x5 feet in volume.

Teams then navigate their rovers around the half-mile course with only a virtual 6-minute supply of oxygen and a 1-minute reserve. They gain points as they progress through all stages of the competition. They earn additional points by returning the results of their mission tasks and finishing without using their oxygen reserve. The course includes a simulated field of asteroid debris—boulders from 5 to 15 in. across; an ancient stream bed with pebbles approximately 6 in. deep; and erosion ruts and crevasses of varying widths and depths.

For the competition, EVT designed a rover with a four-wheel suspension system and a parallelogram design to give more ground clearance. Independent front and rear transmission systems allow the two drivers to decide which of the eight-speed, internally geared hub works best individually at each bend of the course. The house-made, carbon-fiber seats and wheels provide light-weight durability. The 4130 chromoly steel frame has varying diameters and wall thickness to maximize strength and minimize weight. The rover weighs 107 lbs.

The students designed and engineered two lithium-powered task tools for gathering liquid and solid samples from the course. There’s also a mechanical filter that gathers spectrographic analysis of the area being explored. Perceiving the mission-objective tasks as equally important as the rover itself, the students spent as much time designing, prototyping and testing the task tools as they did the rover.

The team faced many learning opportunities throughout the design and testing process, the most challenging being the fabrication of tread for the carbon-fiber wheels that had to be strong enough to withstand the different surfaces on the rover course. After testing multiple samples, the team chose a two-part urethane rubber with a durometer of 60. Attaching the urethane to the carbon proved to be an even larger problem as nothing adhered to the cured urethane. Applying ingenuity, the students used a foam intermediate pierced with tiny holes and placed it into the urethane before curing. Using an aerospace epoxy, the foam had great adhesion to the carbon.

Through the design process, the team learned to design in Fusion 360, V-Carve Pro, CoralDraw and TinkerCAD, and used the laser cutter to make templates and parts, 3D printers for rapid prototyping, a three-axis mill for making molds, a plasma cutter for metal parts, and a TIG welder to assemble the 4130 Chromoly steel tubing for the rover’s frame.

About the Experimental Vehicle Team

The Experimental Vehicle Team is a co-curricular program that teaches budding engineers real-life problem-solving skills. Founded in 1997 as the Supermileage Team, past Experimental Vehicle Teams have built multiple solar vehicles, a safer electric motorcycle for urban commuting, a one-person car that got more than 1,300 mpg and an electric car that traveled 50 miles on two car batteries. The team has won 15 national championships, one international championship and set numerous national records in its history.

Founded in 1885, Saint Thomas Academy is an all-male, college preparatory, Catholic, military/leadership school committed to preparing young men in grades 6-12 to succeed in college and in life. For more information, please visit www.cadets.com.