CAASE keynoter sees a need for wider incorporation of standards across different software, as well as improvements in multi-discipline optimization methods to accelerate design of experiments.

Ford Motor Company is preparing itself for an automotive market that will look significantly different in the next 10 years. The company recently announced it was abandoning the bulk of its sedan line in the U.S. (including mothballing the venerable Ford Taurus) in favor of its more popular trucks and SUVs. But the company is also preparing for a future in which there are more hybrid and battery electric vehicles, a greater reliance on ride sharing, and a highly connected vehicle and infrastructure ecosystem. 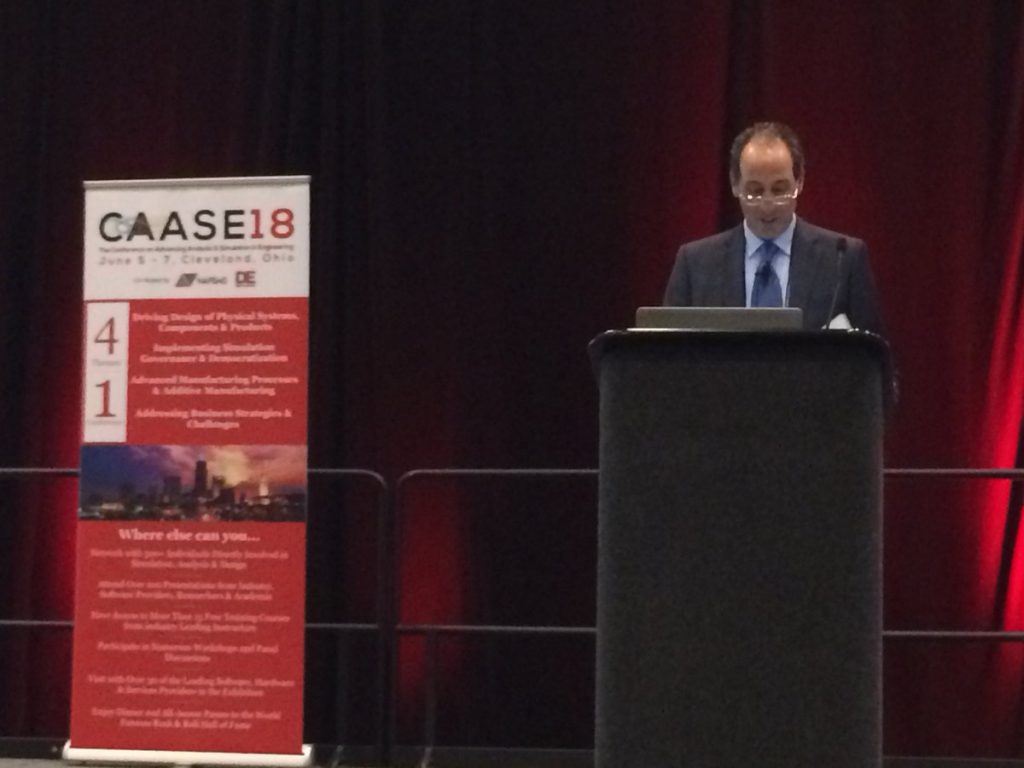 Getting from here to there successfully will also rely heavily on advanced simulation tools and processes, according to Piero Aversa, Ford’s chief engineer for the Global Powertrain NVH & CAE, during his keynote presentation at the Conference on Advancing Simulation and Analysis in Engineering (CAASE18) in Cleveland this morning. The conference, presented by NAFEMS and Digital Engineering, runs June 5-7.

Aversa used a video from McKinsey to outline some of the big changes coming to the auto industry – more than 200 hybrid and electric vehicles will be released by 2030, and more than half of new cars will be sold in Asia. Shared mobility services like Uber will also see 30% annual growth through 2030.

“There is a lot of disruption coming our way,” Aversa said.

Those disruptions will turn up in Ford’s own product mix, which will add 13 new electric and hybrid vehicles over the next five years. Those will include hybrid versions of the popular F150 and Mustang, in addition to a fully electric small SUV and an autonomous hybrid. Ford has also launched its own ride sharing program called Chariot in some cities.

“The car as we know it will totally change,” Aversa said, noting that the car will have a “soul” that reflects the needs and personality of the driver.

Simulation Use Evolves to Combat Disruption

The company is shifting to 8- and 10-speed transmissions, lighter weight materials, and full connectivity of its fleet by 2019, when 100% of new Ford vehicles in the U.S. will have full connectivity. It also plans to release a full SAE Level 4 autonomous vehicle in 2021 for commercial ride sharing that will not include a steering wheel or brake/gas pedals.

These shifts will require new approaches to simulation and co-simulation to help create new electric powertrains, downsized engines, and other components that can improve efficiency while reducing weight and providing optimal NVH (noise, vibration & harshness) performance.

“This creates new error states that have to be managed,” Aversa said. New models will have lower levels of sound masking, exposure to higher frequency mechanical noises, and a shift in critical frequencies and reduced mass damping.

To compensate for these NVH issues as early as possible in the design process, Ford is using simulation of multiple physics, including FEA, BEM, MBD, CFD, FSI and MDO. “The way we look at NVH, it is all about managing system interactions,” Aversa said. “NVH touches all parts of the vehicle.”

Aversa provided a number of different examples of how multiphysics simulation and co-simulation are used to address issues like gear rattle and engine acoustic response under different load conditions.

In one instance, Ford worked with MSC Software to develop a solution that could compute and generate simulated sound files for driveline tip-in clunk noises that could be produced by metal-to-metal contact in the drivetrain. “Using previous methods we were limited to predicting vibration in the rear axle, but that wasn’t enough,” Aversa said. “The customer perceives the noise, not the vibration.”

They can now subjectively analyze the level of “clunking” noise during various stages of development.

Ford also combines tools from companies like GT Power and Romax to model different physics as they interact in the finished vehicle. They use this co-simulation process to evaluate tradeoffs between NVH performance, cost and fuel economy, for example.

Moving forward, Ford sees a need for wider incorporation of FMI (functional mock-up interface) standards across different software, as well as improvements in multi-discipline optimization methods and algorithms to accelerate design of experiments.

“We are making significant strides, but we see challenges ahead and we need to continue working on more user-friendly and faster methods that will allow democratization of simulation, and allow us to push for fewer and fewer physical tests,” Aversa said.