Simulation in the Cloud

Cloud-based solutions allow engineers to access a wider variety of hardware instances than would be possible to support on-premise.

Demand for simulation resources has expanded as engineering firms increase their use of simulation in the design process and throughout product development. That has taxed the IT infrastructure at many firms and left smaller companies struggling to find ways to run more complex simulations absent their own high-performance computing (HPC) resources.

The need for cloud-based simulation is growing, particularly within the past year, because companies are searching for more elasticity when it comes to simulation, according to Todd McDevitt, director of product management at ANSYS. Companies are also looking for burst capabilities during peak demand periods without having to invest in additional hardware or software licenses.

“Customers may have some form of on-premise HPC infrastructure, but they want to reduce queue times, or they are going through a refresh cycle on their hardware and want to move workloads off of those resources,” McDevitt says. “But it usually begins with a bursting need.”

As a result, traditional simulation providers are branching out into the cloud, and new cloud-only startups are gaining traction in the market.

“There is an educated market around cloud engineering software now,” says David Heiny, CEO at SimScale. “The large vendors have made steps toward offering cloud solutions, so the industry is more familiar with the approach.”

The appeal of cloud-based simulation varies based on an individual company’s existing investments. “If they have already invested in existing hardware, then the impetus to go to the cloud is not as great,” says Ravi Shankar, director of simulation product marketing for Siemens PLM Software. “Cloud options get more interesting when [companies] are purchasing new hardware. They may have larger models and want to take advantage of better processing.”

That bottleneck of queuing up for access to on-site HPC resources was the impetus behind the founding of OnScale, according to CEO Ian Campbell. “Legacy CAE is too costly, too risky and too slow,” he explains. “Every engineering firm goes through cycles of engineering workloads, but the way existing CAE models work [is] you have variable workloads and a fixed computer infrastructure that can’t scale to meet those workloads. If demand exceeds supply, you are wasting time waiting for access. If supply exceeds demand, you are wasting budget and resources.”

“The simulation load is never stable,” Heiny says. “You have peak demands. On the cloud, if you want to run 20 simulations on 100 cores, it’s just there. You just run it. You don’t have to talk the vendor about getting a burst license. With a cloud-based solution like SimScale, it’s there out of the box.”

Simulation providers have taken slightly different approaches to their cloud products. SimScale was created to provide structural, mechanical, flow and thermal simulation in the cloud, as well as some multiphysics simulations. The company’s platform can be integrated with other design tools and fundamentally supports most general exchange formats. “Everything produced in SimScale can be downloaded and used in another solver,” Heiny says.

SimScale also offers a community plan for free that can be used for open source and hobby projects. A professional pricing level is targeted at proprietary projects and includes unlimited data storage, encryption and real-time support. The enterprise level is for multi-user and more computationally demanding simulations.

The community plans make projects public to other members. “Sharing this know-how in simulation becomes more intense and effective within the same software and with the community,” Heiny says. “There is collaboration built into the product.”

The company is targeting customers that are new to simulation. “Our approach is to make simulation more widely accessible,” Heiny says. Cloud-based simulation not only lowers the cost of entry, but also enables a greater degree of collaboration. “You can collaborate in real time with other stakeholders, who can all view the same simulation projects in real time,” Heiny says. “We have also leveraged data science to automate some of the work, and these things were not possible in the desktop realm.”

ANSYS has worked closely with its own network of cloud hosting partners to optimize its products to run on their infrastructure to ensure reliable availability via their data centers. “We make sure that our solvers and our products are ro

bust and scalable enough to take advantage of cloud resources, that we are parallelizing on the new GPU instances and other HPC architectures,” McDevitt says. “We also don’t force our customers into a particular business model. Our customers can take their paid licenses to the cloud and use them there, and we’ve introduced a usage-based licensing system.”

Siemens offers cloud-based simulation primarily through its partnership with Rescale, providing access to NX Nastran, Simcenter 3D and Star CCM+. Customers can either purchase a fully software-as-a-service (SaaS) based license through Rescale, or they can purchase a traditional license from Siemens and use Rescale to host the software.

“Our philosophy and strategy is to offer as much flexibility as possible in terms of the way customers can interact with the software solutions we offer,” Shankar says. “The cloud model adds another layer of that flexibility.”

Moving forward, he says the company plans to eventually offer solutions that were built natively for the cloud.

“Demand for cloud has varied,” Shankar says. “It’s not a major part [of] our business today, but we are making sure we have everything in place for customers who do need it today, and we anticipate future growth.”

OnScale offers its software for free (for 10 core hours per month) and leverages Amazon Web Services (AWS) for its compute platform. “Users don’t have to pay all of that money per seat. The service is sold on a subscription basis,” Campbell says.

OnScale is targeting markets that Campbell notes are overlooked by other simulation companies, like internet of things (IoT) organizations that don’t necessarily have access to tools that meet their requirements. OnScale claims it can outperform traditional simulation tools thanks to its access to nearly unlimited compute resources on AWS, as well as perform tasks that would be difficult or impossible using traditional infrastructure, like 3D versions of surface acoustic wave filters.

Some experts believe that a full SaaS model is the future of engineering. “Engineers are enthusiastic about the removal of the licensing and computational bottlenecks,” says Gerry Harvey, vice president of engineering at OnScale.

Other new tools are emerging, and traditional players are partnering with cloud-based firms as well. Earlier this year, SimScale announced it was integrating Siemens Parasolid software and HOOPS Exchange to provide a more seamless simulation workflow and improved accuracy.

Autodesk offers cloud simulation for Autodesk CFD, Moldflow and Fusion360. Plastic simulation provider Moldex3D has also released a cloud extension of its software on AWS, allowing users to offload larger simulations without the expense of investing in new hardware or software licenses.

Customers take different approaches to cloud deployments, based on the size of their models and their own existing infrastructure. Often they want burst access or are looking for other ways to augment their own computing infrastructure. Smaller firms may rely entirely on cloud solutions for their simulation needs. 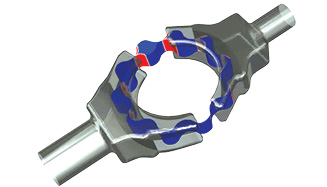 The cloud also provides hardware elasticity. Different solvers and physics are usually optimized to run on different types of hardware. Cloud-based solutions allow engineers to access a much wider variety of hardware instances than would be possible to support on premise (at least without significant costs). How much memory per core a user needs is different for computational fluid dynamics (CFD) than for high-frequency electromagnetic or mechanical simulations—the cloud provides access to all of these configurations.

Companies with existing on-premise infrastructure may take a hybrid approach, running some simulations on their own equipment and others in the cloud, based on demand. Data is a factor as well, since simulation creates large amounts of data that users don’t necessarily want to move back and forth between systems.

Whether a simulation is run on premise or on a cloud-based infrastructure should be invisible to the engineer. “The platform should send the job to the appropriate resources, so the process looks the same to the engineer,” McDevitt says. Those decisions about resources can be made at the application layer rather than the platform level.

At ANSYS, McDevitt says that for CFD customers, many users do some pre-processing locally and then push out the solve portion to the cloud so that they can achieve faster turnaround times. That has been driven, in part, by model size and complexity.

“On the mechanical side, we see customers want[ing] to be more interactive and do more pre- and post-processing on the cloud,” McDevitt says. In the electronic space, customers may solve for a particular frequency on their workstation, but move to the cloud to repeat the same test across multiple other frequencies.

“That’s similar to a design point scenario, where customers want to look at different geometry parameters or different material configurations to optimize design points,” McDevitt says. “They’ll solve one design point and then go back for a hundred or a thousand different variations.”

Shankar explains that the Siemens customers most interested in cloud-based offerings have been those with larger models that want to take advantage of parallel processing or burst simulations. “They are able to use the extra capacity that the cloud provides almost instantaneously, without the need for IT to set up new hardware,” Shankar says.

That doesn’t mean that the cloud will work for every company. Users looking for steady-state usage won’t find an economic benefit to cloud platforms. “It’s like selling your car, and then paying for an Uber driver to sit outside your house 24/7,” McDevitt says. “The economics are not going to work out.”

Some aerospace and defense customers cannot utilize certain types of cloud services because of certification requirements or security issues. Companies that primarily are working with smaller models that can compute quickly, or those that already have unused compute capacity in house, are not likely to benefit from a move to the cloud. “If the models are not taking advantage of parallel processing, then those would be situations where the cloud doesn’t offer an advantage,” Shankar says.

“And if you just invested in a new HPC architecture, you first want to make sure you can leverage that hardware,” Heiny adds.

He says that the biggest challenge for cloud simulation customers is one shared by their on-premise counterparts—users must trust the simulation results.

“If they aren’t ready to take advantage of those insights, then there’s no point in doing it, and that’s true of both on-promise and cloud solutions,” he says. “That’s where collaboration and support come in handy. We have a dedicated onboarding program to work with customers to get them to the point that they can trust in what they are doing. That’s mission critical. The cloud doesn’t remove that obstacle, but the tools that make the user successful allow us to get there faster than in the desktop realm.”