Medical device manufacturers rely on simulation for design and development of their products, but efforts are underway to combine various simulation approaches with other types of medical modeling.

Medical device manufacturers rely on simulation for design and development of their products, but efforts are underway to combine various simulation approaches with other types of medical modeling so that simulation can be used to advanced regulatory approval of those devices – and potentially augment or even replace animal testing or clinical trials with virtual modeling.

In this morning’s keynote at the Conference on Advancing Analysis & Simulation in Engineering (CAASE18) in Cleveland, Tina Morrison, deputy director, Division of Applied Mechanics, Office of Science and Engineering Laboratories, Center for Devices and Radiological Health, at the U.S. FDA, explained some of the efforts underway to better utilize simulation and modeling in medical device approvals. Morrison is also the chair of the new FDA working group on modeling and simulation, which was launched in 2017.

The vision is to use a statistical framework to model device performance and leverage virtual patient data. In the future, this could mean the use of digital twins of actual human beings in clinical studies.

Currently the FDA relies on a variety of types of models to gather evidence to determine whether a given device is effective. The most familiar are bench studies, animal studies, and clinical trials. Computational modeling is emerging as a more important source of evidence. 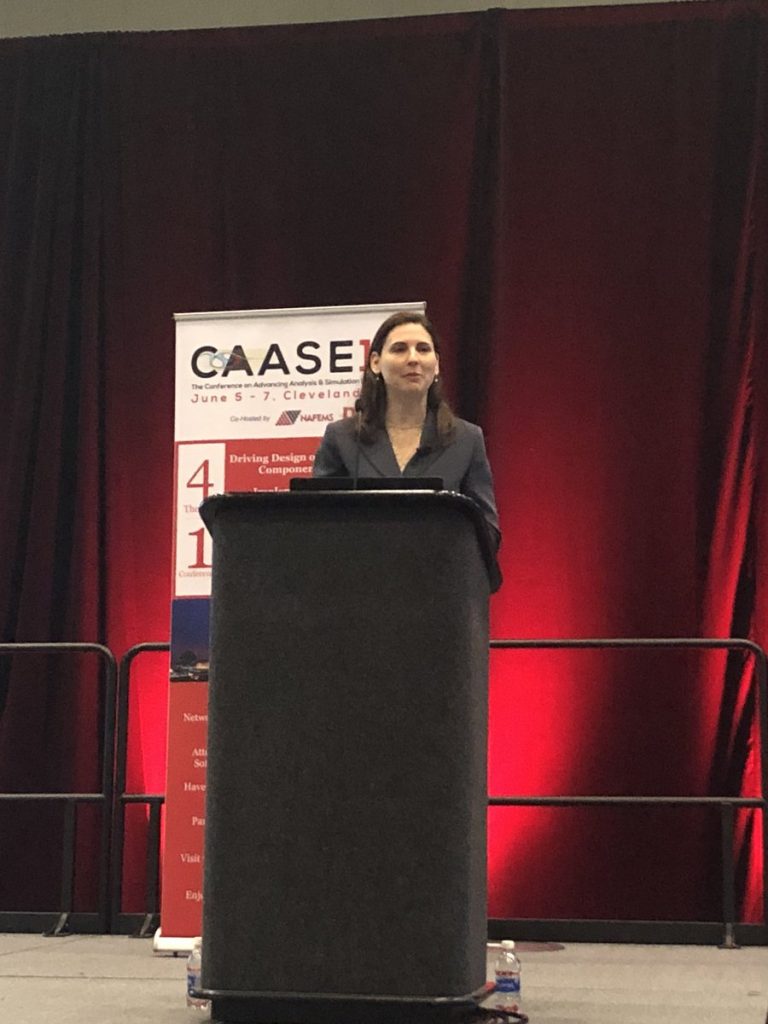 “The space I’m interested in is fully harnessing the power of modeling to help in the design and research of medical devices, as well as in using those models to get important clinical information,” Morrison said.

Computer modeling can provide improvements in predicting device performance beyond the standard instructions for use (IFU), and are also good at being adaptable for patient specificity, maintaining experimental controls, varying testing parameters, and controlling costs. A clinical trial can cost up to $50,000 per patient. Even computationally heavy simulations could provide cost and time savings.

Scientists can simulate actual medical devices, as well as anatomy, physiology, chemical toxicology, and the manufacturing of 3D-printed devices. Simulation can also be embedded in medical devices – glucose monitors, for example, could predict when patient glucose levels might spike. 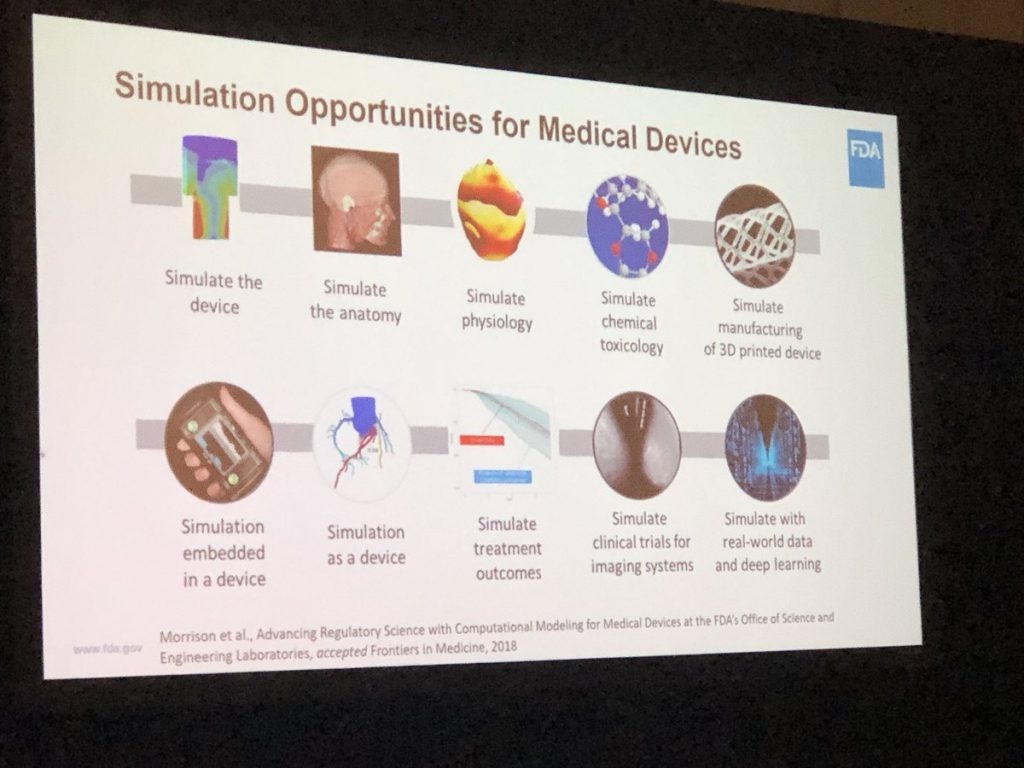 Simulation tools themselves can also be medical devices, and there are already software tools available that are used for diagnosis and establishing treatment plans.

The FDA has engaged with a number of industry bodies to develop standards and guidance around modeling and simulation, including work with the International Medical Device Regulators Forum.

When it comes to evaluating device submissions, the FDA has used a mix of computational solid mechanics, computational electromagnetism, CFD, and computational heat transfer to test device performance.

“We’d like to use simulation more often, but in our community there are some hurdles,” Morrison said. Those include a lack of science around some biomedical models and how devices may interact with patients; resistance among device manufacturers to submit simulation data; regulatory uncertainty; and a mistrust of simulation by doctors and other clinicians.

There are currently three dozen projects underway through the Office of Science and Engineering Laboratories centered on modeling and simulation.

The FDA has also used simulation in orthopedics, using a computational model to predict fretting (wear) or corrosion in total hip replacement implants.

In imaging systems, as mentioned before, FDA scientists have come up with a way to simulate all aspects of a patient going through an MRI machine. “The physics of imaging is really well understood,” Morrison said. “We can simulate all aspects of a breast structure and the different types of masses and lesions that might be there. We use machine learning to train the algorithms to figure out how to detect a lesion. There are companies trying to develop new imaging methodologies to change the screening requirements for breast cancer, but that would require hundreds of patients, dozens of radiologists, and many years to complete.”

Morrison: @US_FDA is working to better define information that comes from computer models as digital evidence. Typically we rely on animal, bench and clinical studies. We’re moving to a future where we can rely more fully on digital evidence (#simulation). #CAASE18pic.twitter.com/3zCAguTmYm

The FDA worked with a manufacturer to compare the simulated results with real-world clinical trails. “They simulated a 1,000-patient study in just three months, and came up with the same regulatory conclusions,” Morrison said.

In the future, that same type of in silico clinical trial could be used to replace animal testing or clinical trials with people. That would involve combining device simulations with statistical modeling.

The agency is also working with Dassault Systemes to work with that company’s Living Heart Project to investigate the possibility using the model as a platform for performing in silico clinical studies for medical devices and even pharmaceuticals.

The agency will release new standards around simulation and modeling later this summer.