Natural input made possible by touchscreens improves the sketching experience.

When it comes to capturing the quick, spontaneous bursts of ideas that come without warning, cocktail napkins or scraps of paper still remain the most efficient medium for engineers. They’re ubiquitous, cheap, and disposable, making them ideal for exploring design concepts not yet ready for public consumption.

As much of the design workflow migrates from paper to pixels, some programs emerge as virtual spaces for conceptual design, the digital equivalent of cocktail napkins and sketchpads. They target the pre-CAD, pre-drafting phase, where ideas are open to rapid changes, drastic revisions, and even elimination. Here, precisions and dimensions are less important; creativity, aesthetics, and expressiveness are more important. Therefore, the virtual tools look a lot more like an artist’s chest than an engineer’s drafting table.

In the era of mouse and keyboard, the digital napkins were hampered by the form factor of the hardware’s input system. It was the rise of touch-sensitive tablets that evolve them into more intelligent species.

What is now known as Autodesk Sketchbook and Sketchbook Pro was originally a design-centric product, part of the Alias portfolio, dating back to the early 2000s. The program’s color pallet, virtual brushes and pens, and sketch tools provided industrial and automotive designers with a way to develop eye-catching concept arts. When Autodesk acquired Alias in 2005, the program became part of Autodesk.

But it was the lightweight mobile version, dubbed Sketchbook Mobile ($2.99), that debuted on the iPhone, the iPod Touch, and, soon afterward, the iPad that turned the program into a hit. For a company with professional titles typically priced between $2,500 to $8,000, it marked a new territory.

Today, Sketchbook Mobile is still available for the mobile device users, but a more comprehensive edition, Sketchbook Pro, is also available to tablet users. The software’s versatile toolset is adaptable to architectural and industrial design as well as manga drawing and digital fine art. The Perspective Guides, for example, make it easy to create orthographic projections or architectural perspective drawings with greater ease. The program benefits greatly from the pressure-sensitive stylus input, available on Wacom tablets, Dell Inspiron 2-in-1, Dell Latitude 2-in-1, and other tablet-style devices. At $85 a year, even its enterprise license seemed like a bargain, but the company recently made Sketchbook Pro free to everyone..

Sketchbook drawings can easily be exported to other professional titles, such as AutoCAD, Autodesk Inventor, and Autodesk 3DS Max as full-colored raster images for tracing, but there’s no easy way to convert them into Splines and Vector objects for further editing.

Siemens PLM Software’s Catchbook, a touch-supported 2D sketching program, debuted in mid-2016 as an app for mobile device and tablet users. One of its attractive features is the ability to automatically convert hand-drawn rough objects into mathematically accurate squares, circles, and curves. It also allows users to add dimensions and accurate measurements with the touch of the stylus, giving a way to create production drawings with the ease of a sketch pad. 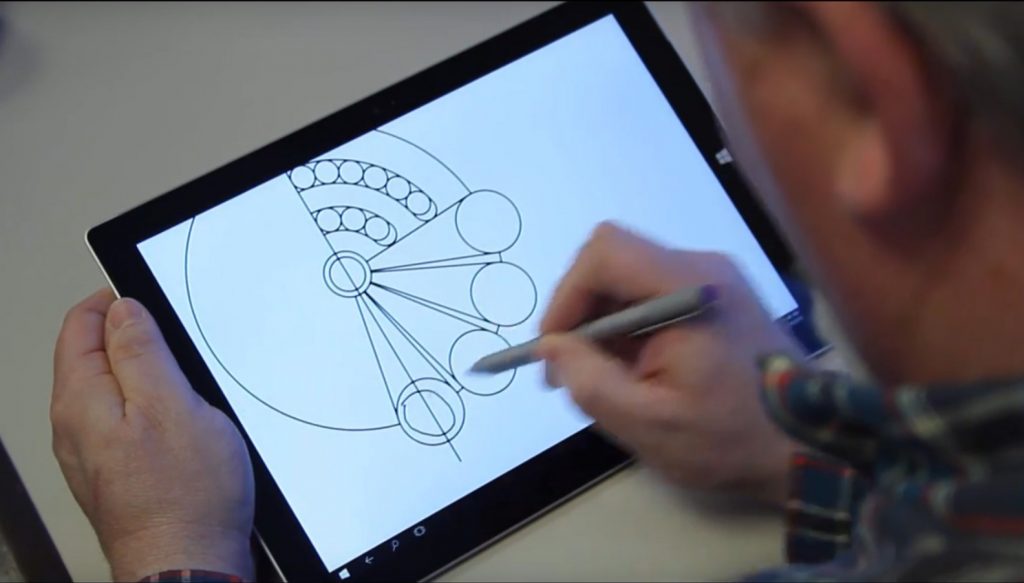 “While most artistic drawings apps lack accurate dimensions or the ability to manipulate and move ink, Catchbook lets you push, pull, snap and move curves wherever you want,” Siemens PLM Software writes. The precision that comes from pointed-tip input—something older generation tablets do not support—makes it possible for the user to easily select specific edges, corners, and borders of geometric objects to automatic measure distances and add dimensions.

Catchbook drawings can even be exported to Siemens NX, the company’s higher end 3D modeling and design program. The Catchbook app itself is free, but to save a drawing costs $3.99, to publish it $2.99.

CATIA Natural Sketch is not an independent app but part of CATIA, the 3D modeling and design brand from Dassault Systèmes. It was first announced in November 2011, as part of the CATIA for Creative Design lineup, which, the company writes, “addresses the complete industrial design workflow in a unified environment, from ideation and concept to refinement, design validation, and final production-ready 3D product.”

Unlike other sketching apps, Natural Sketch allows you to rotate the drawing planes and sketch in different angles, from different orientations. This makes Natural Sketch drawings more easily adaptable to subsequent 3D model development in CAD, where the curves, lines, and geometry can be reused as guidance for cutting, trimming, extrusion, and revolving operations.

“By directly transforming a 2D sketch into a 3D digital product, inconsistencies between the design intent and reality can be avoided, resulting in dramatic improvements in design quality,” writes Dassault Systemes. The company promoted the app in its Designer’s Cafe events in 2013, hosted in Japan in Osaka, Nagoya, and Tokyo.

An Interactive Surface for Your System

The Dell Canvas interactive touchscreen display can work in conjunction with a pen and totem. Image courtesy of Dell.

Going beyond tablets, the Dell Canvas is both a display and input device merged into one. It is a peripheral designed to be connected to a Windows 10 workstation and allows you to work with your content with the pen in one hand and with touch or the totem dial in the other to dual-handedly interact with content and menus. The screen recognizes a pattern of touchpoints on the bottom of the totem, enabling customizable software menus to quickly appear for easy selection. With a turn of the wrist, you can activate line weight or color or any other setting of your choice.

Dell Canvas also enables a seamless “see and do” experience - users can now use a vertical monitor as their see screen for their inspiration images, references or just plainly looking at the holistic view of their content and use the Canvas as their do screen to directly interact with their content and zoom-in to the details with an immersive pen and touch experience.