The Future of Design

DE readers provide a glimpse of their technology usage in our annual survey.

DE readers provide a glimpse of their technology usage in our annual survey. 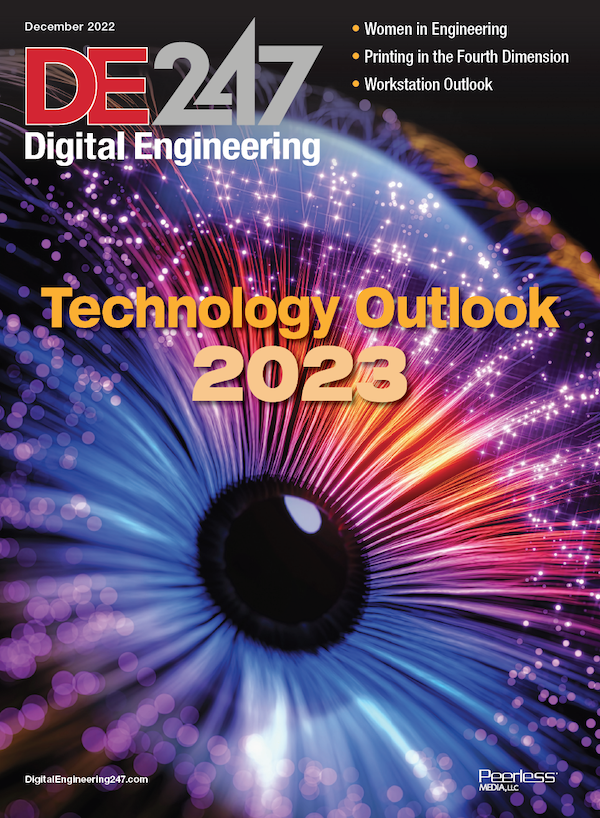 Digital Engineering December 2022
Our December issue includes the results of our annual Technology Outlook Survey, as well as...

While reporting the results of our annual Technology Outlook Survey last year, during a once-in-a-century pandemic marked by social and economic upheaval, all occurring in the midst of a contentious election year, we noted technology usage in the engineering segment remained relatively stable.

Though there were some bumps in the road on the hardware side (a brief drop in sales for 3D printers; supply chain problems bottlenecking the workstation market), our readers reported they were holding steady when it came to embracing simulation and other technologies. Market research from third-party firms, in fact, shows that the pandemic pushed many companies to increase their use of things like cloud-based software, virtual and augmented reality tools, remote collaboration, additive manufacturing and other solutions.

As we have in previous years, we again asked Digital Engineering’s audience for their perspectives on the current and future technologies that are shaping design engineering work, along with the products and systems that they are designing. 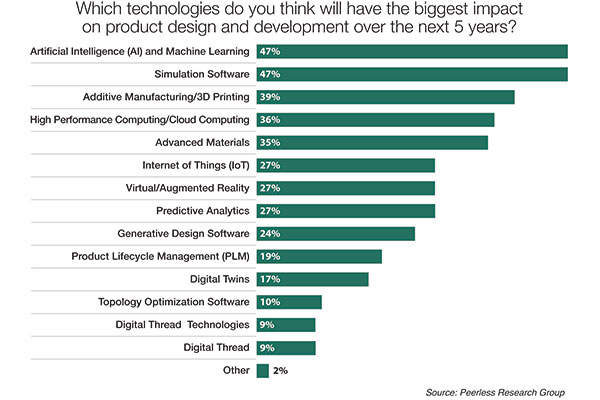 Technologies predicted to have greatest impact in next 5 years. Click here for full-size image. Images courtesy of Peerless Research Group.

We received responses from more than 330 readers. The largest group of respondents described their primary role as product or system design engineering (24%), followed by engineering management (13%) and a three-way tie among corporate management, research & development, and consultant/service provider at 10%. Respondents were spread among market sectors, with the majority working in aerospace/aviation/defense, industrial machinery & products and automotive.

For the past three years of this survey, collaboration has been listed as an extremely/somewhat important challenge in the day-to-day work of design engineers. That has become even more apparent in the current climate, with a global pandemic forcing remote work upon engineers who previously worked in close quarters with colleagues and were able to travel to customer locations. Collaboration was listed as the top challenge again, being cited as a very or somewhat important challenge by 88% of respondents (down slightly from 91% last year). The next most common challenges were inefficient workflows (87%), short product development deadlines (85%), lack of training (84%) and lack of adequate budget (83%). 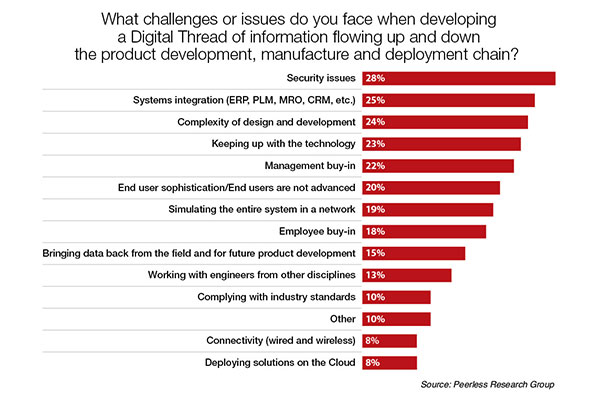 Regulatory compliance was at 75%, down slightly from 80% last year, while staffing difficulties were listed as a challenge by 80% of respondents (up from 75%) last year—not surprising in an environment where employers across industries are having a hard time finding skilled employees.

For the first time this year we asked our readers about their efforts relative to environmental sustainability in design. According to the results, 30% of readers said that sustainability was extremely important in their design/engineering activities, while 44% considered it somewhat important.

Asked why sustainability was important, many responded that those initiatives were driven by internal company mandates or compliance efforts. Others emphasized concerns about their own environmental impact, pressure from customers and the need to create more ethical designs. Among those citing sustainability as extremely or somewhat important, a few responses included: 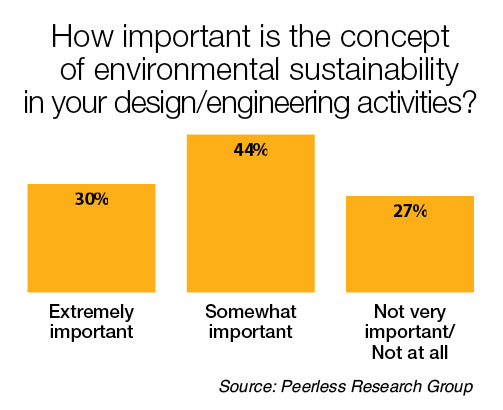 Relevance of sustainability in engineering.

“There is a realization that there is cost being borne by society by all the products we produce and consume and so consumers will be preferring designs that demonstrate awareness of the environmental impact.”

“We are experiencing more and more outside pressure to make significant progress in this area specifically.”

Among the roughly one-quarter of readers reporting that sustainability was not important, respondents noted that their specific industry was either not affected or exempt from requirements; that their products were inherently long-lived, low-volume or recyclable; or that their customers were not interested in sustainability. Among those responses:

“It is not a company priority.”

“It is a political problem not an engineering problem, with only political solutions that cannot be justified.”

“Many regulatory restrictions and requirements make it difficult to adopt new methods, materials, and design.”

We saw a shift in perceptions when we asked respondents what technologies they thought would have the biggest impact on product design and development over the next five years. In past years, additive manufacturing and artificial intelligence (AI)/machine learning swapped the top spot back and forth, with simulation coming in third.

This year, AI/machine learning and simulation tied at the top (47%), with additive manufacturing a somewhat distant third at 39%. There has been growth in the adoption of AI and simulation as more companies shift to digital manufacturing and Industry 4.0 approaches, but the drop in additive was somewhat surprising given the high profile the technology had over the past year as it helped alleviate some supply chain snags in the U.S.

The top three were followed by high-performance computing (HPC)/cloud computing (36%), advanced materials (35%), and the Internet of Things (IoT) and virtual reality (VR)/augmented reality (AR), tied at 27% along with predictive analytics. Generative design dropped from 30% of respondents to 24% this year.

We also asked readers what technologies they were currently using or developing products for, as well as which technologies they expected to adopt in the next two years. As was the case in previous years, simulation software held steady as the technology that readers were most likely currently using, with 59% of respondents reporting that they were doing so (up from 57% last year). Additive manufacturing/3D printing was second at 40% (down from 44%).

Those were followed by product lifecycle management (PLM; 37%), IoT and advanced materials (28%) and HPC/cloud computing (25%). 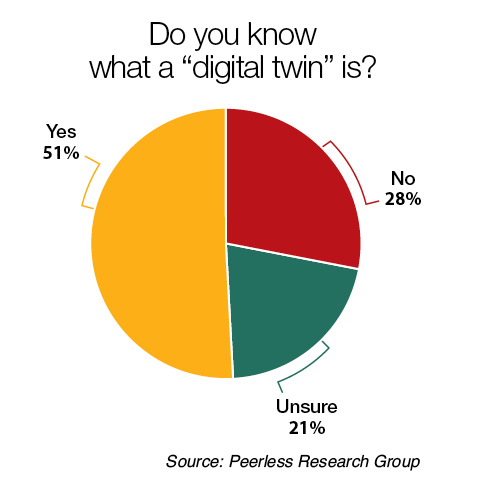 Over the next two years, 26% of respondents plan to incorporate AI/machine learning in their design/development processes, with the same number reporting plans to use IoT. Digital twins and VR/AR tied for second place, with 22% of respondents planning to incorporate those technologies. HPC/cloud followed at 21%, with predictive analytics fourth at 20%. Generative design dropped from second to fifth place (26% last year; 19% this year), while additive manufacturing dropped from 23% to 19% of respondents.

As was the case in past surveys, additive manufacturing/3D printing is primarily a prototyping tool for 83% of recurrent users. Testing remains the second most common application at 56% (up slightly from last year). End-use part applications were reported by 39% of current users (in line with previous surveys). 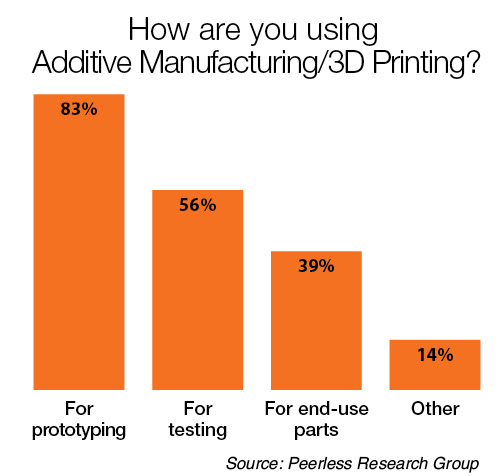 Incorporation of AI and generative design technologies ticked up slightly since last year, with just 16% of respondents currently using generative technology (up 1 point from last year) and 21% using AI/machine learning (up from 16%). 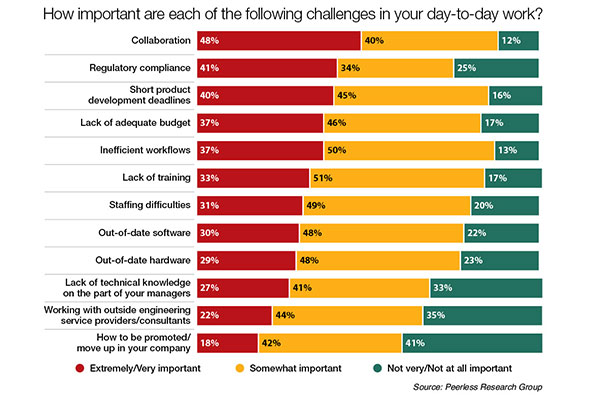 Satisfaction with generative design is generally positive, although less enthusiastic than last year. In 2020, 52% of users said they were extremely satisfied with the technology’s ability to discover new designs; that figure has dropped to 35%. However, the somewhat satisfied responses went from 32% to 61%, and the not satisfied users fell from 16% to just 4%.

Asked their impressions of generative design software, reviews were somewhat mixed but users did seem to think that it could help optimize designs, particularly as more companies adopt additive manufacturing. However, many respondents thought the technology still required some more maturity and standardization before it could be truly beneficial.

When asked what technologies would revolutionize the design engineering process, the largest number (58%) strongly agreed that it would be additive manufacturing/3D printing (down slightly from 61% last year). Simulation-led design was second, with 52% in line with the previous survey. There was a three-way tie at 36% of respondents for cloud-hosted solutions, VR/AR solutions and generative design.

Asked about familiarity with various technologies, simulation led the pack with 83% of respondents being very or somewhat familiar, followed by additive manufacturing (79%), PLM (78%) and HPC/Cloud (74%).