Thermal Simulation and Wearables: Too Hot to Handle, Too Bright to Watch 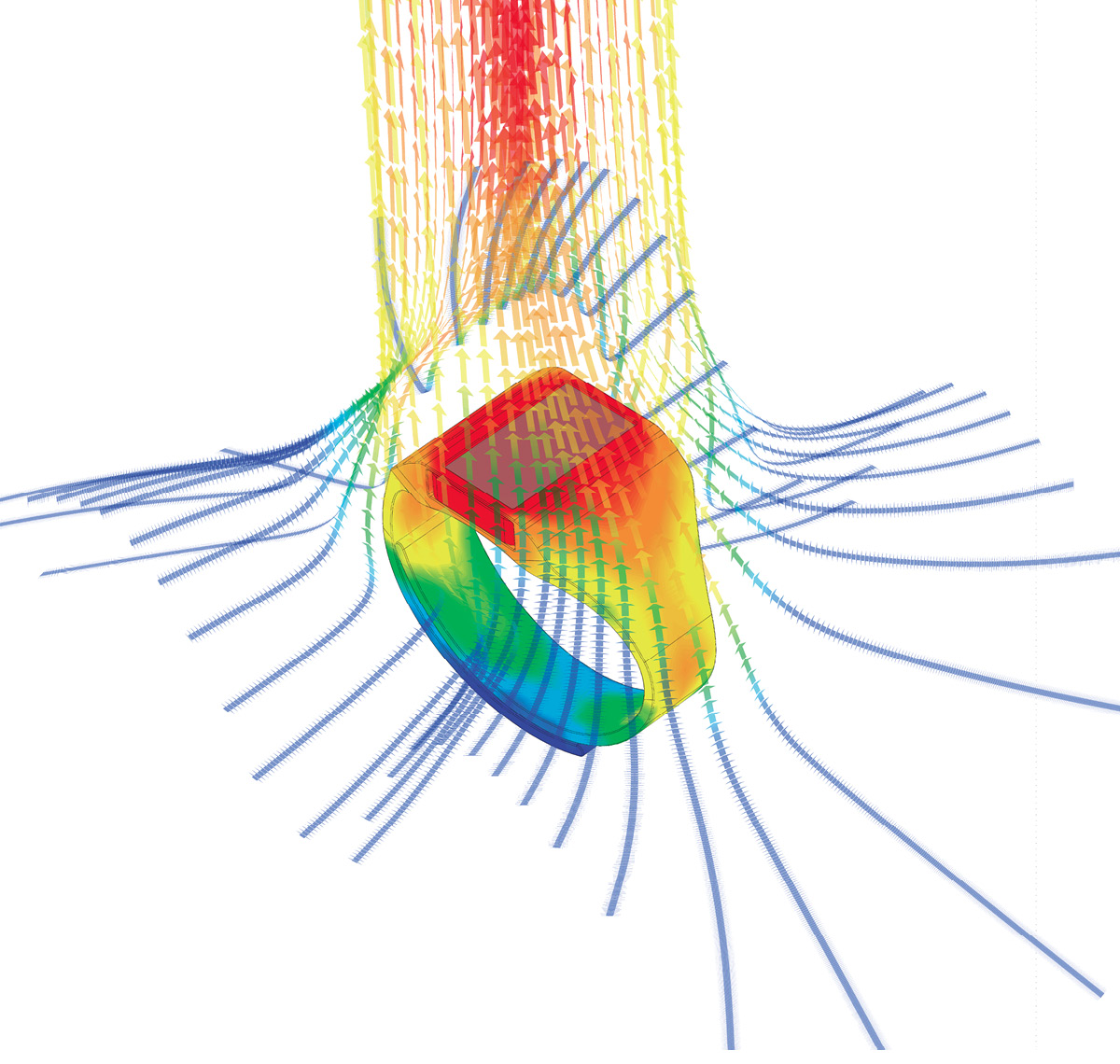 With Mentor Graphics FloTHERM XT, you can perform airflow, temperature and heat transfer in components, boards and complete systems. Shown here is a computational fluid dynamics analysis of a smartwatch in FloTHERM. Image courtesy of Mentor Graphics.

While the market grows, the devices themselves are shrinking. The miniaturization adds a new layer of complexity to the design. “With wearables, the electronics are working hard to generate and collect all the data, so they’re generating too much heat,” says Akhil Docca, Future Facilities’ corporate marketing & product strategy manager. Future Facilities develops engineering simulation software to quantify and qualify business decisions. “Now they’re not only smaller, but also closer to the human body than before. That affects human comfort.” 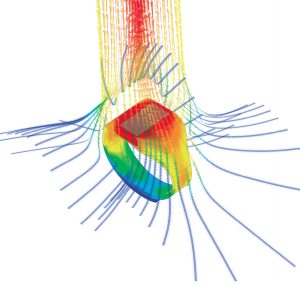 With Mentor Graphics FloTHERM XT, you can perform airflow, temperature and heat transfer in components, boards and complete systems. Shown here is a computational fluid dynamics analysis of a smartwatch in FloTHERM. Image courtesy of Mentor Graphics.

“It’s all based on surface areas. To dissipate heat, the device needs to distribute it onto a surface area,” says John Wilson, Mentor Graphics’ technical marketing engineer. “In the case of a smartwatch, that surface area is not only small but also right next to the skin. It’s important to get it right. Otherwise, people might think the device is too hot to wear and they’ll return it. Or they might get hurt.”

Getting it right means implementing thermal management strategies and cooling mechanisms that activate at the right moment. The solution usually belongs in the thermal engineers’ territory. However, the fixes may affect the electrical layout and mechanical components. Experts believe it’s time to address the shortage of efficient interdisciplinary communication tools.

“Thermal concerns can affect the electrical and mechanical performance of the electronic device as well’, says Steve Pytel, lead electronics product manager at ANSYS. “You can have PCBs (printed circuit boards) delaminate or warp, causing the device to fail, and a thermal fix can also have an adverse effect on the electrical design. It is a completely interrelated design problem.”

Last September, Samsung recalled 2.5 million units of its Galaxy Note 7 after numerous reports of it catching fire. When some replacement units were also reported to suffer from the same hazard, the smartphone maker was forced to terminate sales of the model and launch an investigation into the root cause. The company is expected to take a $5.2 billion loss. According to a Reuters report, the fault rests with the battery (“Samsung Electronics probe finds battery was main cause of Note 7 fires,” Se Young Lee, Jan. 2017). The whole incident revealed the delicate balance between battery life and product performance in connected devices.

“One of the issues with small IoT (Internet of Things) devices is the battery life,” says Wilson. “Consumers want an extended battery life, but they also want more performance. More performance means more heat. One strategy for manufacturers is to insulate the heat-generating device or component, to isolate them from the surrounding parts. Air is probably the best insulator, because it’s free, and it’s pretty difficult to beat air when it comes to low thermal conductivity.” 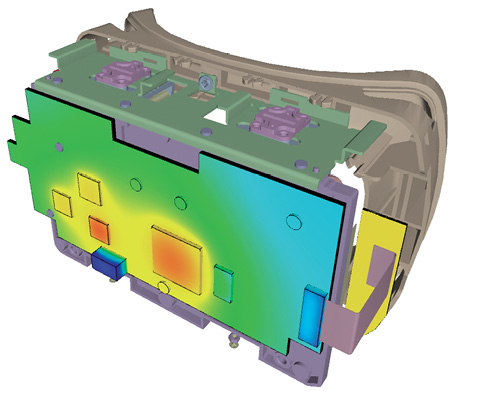 As another alternative, the designer may use molding to strategically spread the heat. “A mold makes a hot component cooler. It homogenizes the temperature because it spreads the heat out. Even a low-conductivity mold could have significant impact on the temperature,” adds Wilson.

The components layouts and fine-tuning are usually done with the help of special simulation software, because experiments and changes made in pixels cost less. However, relying on digital simulation alone is seldom adequate.

A steady state simulation offers a snapshot of the product under a specific set of conditions. A transient simulation, on the other hand, offers the product’s behavior within a slice of time, and is therefore more useful to engineers. But the latter is often more difficult to set up and taxing on the hardware needed to run the simulation.

“Take, for instance, the smartwatch on your wrist,” says Wilson. “While it’s on standby, while you’re not doing anything, it has a certain heat dissipation pattern. That’s steady-state simulation. Now, let’s say you start using Wi-Fi to communicate with something. Now the temperature will gradually rise. That’s transient simulation. At some point the device would become too hot, so its performance has to be throttled [to give it a chance to cool down].”

Transient simulation is much more reliable when it’s calibrated to match the outcomes of a physical test. That means adjusting the input parameters in the digital simulation and experimenting with it until its behavior matches what’s observed in a physical test. Thus calibrated, the simulation model becomes a much more reliable tool for making predictions. “You need to calibrate your model so it gives you accurate feedback on transient scenarios, but that makes building the model much more difficult,” says Wilson.

FloTHERM from Mentor Graphics is a software package for simulating electronics component behaviors. The solver is capable of both steady- and transient-state simulations. “We invested a lot in transient simulation and thermal test calibration tools,” says Wilson. “In FloTHERM, we added a feature to automatically calibrate the model with test data from T3ster [pronounced Tris-ter, a standard way to digitally describe thermal properties and behaviors in integrated circuits].” 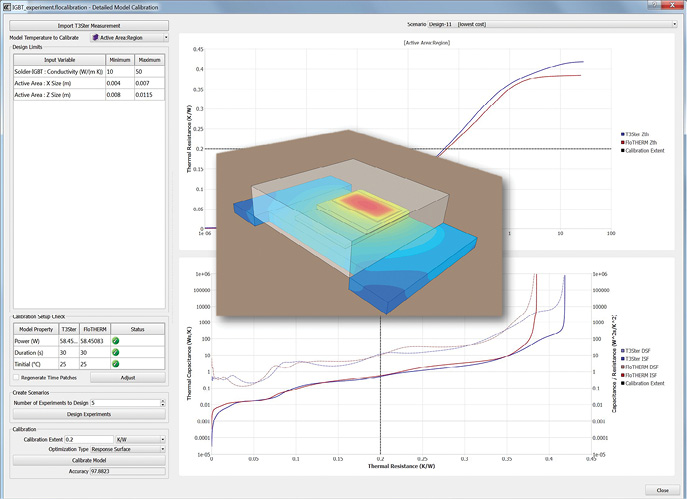 Formed in 2004, Future Facilities began by catering to the emerging data center industry with its thermal simulation software. It has since expanded into the electronics industry. The company now offers two distinct products: 6SigmaDCX software for data center performance prediction and 6SigmaET for thermal simulation of electronics. Because connected devices have a tendency to churn out large volumes of data, Future Facilities feels the impact of IoT on both ends of its businesses.

“Service providers like Apple or Fitbit have to store all that data somewhere, usually in large data centers” Docca points out. That means some customers are using Future Facilities’ software not just to design and simulate their connected devices but also to manage the heating and cooling of their data centers.

“Manufacturers should get the thermal engineers involved very early on,” suggests Docca. “They can run quick feasibility studies. At that point, there may be very little data available [for the new product], but there’s enough historical data to work with [from older generation products]. It’s very important to get that early layout right. Otherwise, you may need to move the heatsink or replace it later. Thermal engineers can help you reduce those costs or mitigate those risks.”

In small, wearable IoT devices, the fitting is of paramount importance, because there is—quite literally—very little room for errors. Docca and his colleagues think it’s a good idea to work in a software program that mimics the natural way in which objects fit together.

“The objects [in wearables] have a natural hierarchy,” explains Docca. “A PCB fits inside a chassis; a component sits on the PCB; the heatsink sits on top of the component. We mimic that in our software. We reproduce that natural order.”

One of the strengths of Future Facilities’ 6Sigma software is its gridding or meshing technology, Docca points out. “We’ve made gridding completely automated, so a lot of our users just have to verify the model, then solve it.”

With thermal simulation, the complexity of the scenario involved may increase the size of the job to the extent where it becomes no longer feasible to process it on a single workstation. In such cases, software written to take advantage of high-performance computing (HPC) clusters gives the user the option to employ additional computing cores, either from a company-owned cluster or on-demand cloud service providers.

“If you have own hardware, you can scale anywhere from four to 32 cores in our software fairly easily,” says Docca. “We also partner with Rescale so users who don’t have hardware can solve the model in Rescale’s clusters.”

Rescale provides on-demand HPC for simulation. It’s part of a growing segment that caters to simulation users who need additional computing power, but aren’t prepared to acquire the necessary hardware. With on-demand HPC services, companies with fluctuating, irregular simulation workloads can complete their jobs in a timely fashion without the need to purchase additional hardware. 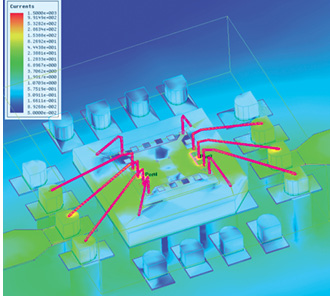 Thermal, electrical and mechanical engineers often use different software packages—and that still remains a cause of communication hiccups. Many software packages now offer a free mobile or lightweight viewer for others to view the results. This approach partially addresses the problem.

As he explains it, PCB power distribution problems include signal integrity, crosstalk and electromagnetic interference. Current flow in a PCB and through the electronic components causes power losses across the board and leads to power dissipation in the components, mainly the ICs. Power losses in conductors within the board and heat generated by ICs increase their temperatures, leading to thermal problems. Moreover, modern microprocessors can demand peak currents of 100 amperes or more. These high currents cause significant heat dissipation in the ICs and significant Joule or Ohmic heating in the connected power planes and traces.

“Even a small change in temperature can affect a device’s performance due to the inverse relationship between electrical and thermal conductivities. This bending can cause solder joints to crack or even result in delamination of the board or traces on the PCB,” Pytel says. “With the ANSYS design flow, you can perform DC analysis, calculate Joule heating, then produce temperature profiles and associated mechanical deformation and stress.”

One of the challenges in thermal simulation is to come up with a set of values that are valid for most people. The wearables are fundamentally mass-market consumer items. Yet, they also demand an unprecedented level of personalization. What’s too bright for some is still too dim for others. What’s too hot for comfort for some may be tolerable for others. For the thermal engineer who must set a threshold, the acceptable range is difficult guesswork. 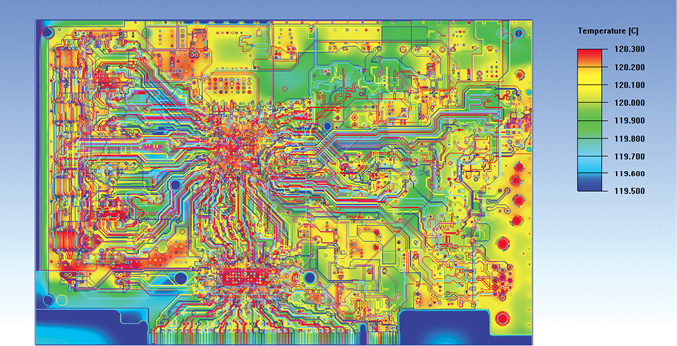 ANSYS Icepak lets you perform transient and steady-state thermal behaviors. Shown here is the heat map of a PCB generated in Icepak. Image courtesy of ANSYS.

“About 10 or 15 years ago, it was common to design something to withstand the maximum thermal load,” explains Wilson. “Now we’re trying to design not just a device that works the same way in every environment—we need to design it so it works differently at cooler ambients, in warmer operations and so on.”

The key to solving this dilemma may rest with better communication among the different engineering disciplines involved. “Thermal engineers need to work more closely with the electrical engineers to understand the device’s power dissipation,” suggests Wilson. “How long can a device stream video before it has to throttle or dim the display to prevent overheating? To decide that, you have to have a much better understanding of the materials involved—and beyond that, also the connection between the materials.”

“Most thermal packages focus on allowing the thermal engineer to get all the data they need so they can build a good model and solve it,” says Docca. “But the industry hasn’t been addressing the need for a centralized way to communicate among everybody. That challenge is quite immense. It’s ongoing, a learning process, and we are slowly moving in the right direction to address the larger communication problems.”