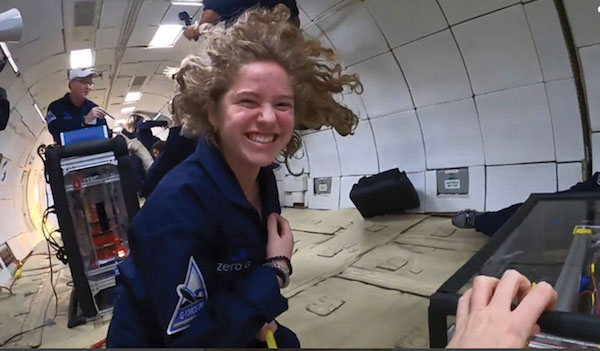 The American Institute of Aeronautics and Astronautics (AIAA) and Blue Origin have announced the winner of their Design/Build/Launch (DBL) competition.

Eleanor Sigrest, a senior enrolled in a dual program at Forest Park High School in Woodbridge, VA, and the Governor’s School at Innovation Park in Manassas, VA, won the competition with her experiment, “Improving Fluid Management Through A Novel Microgravity Slosh Mitigation Technique,” which will be the first AIAA-sponsored payload to go into flight.

“Ever since I can remember,” Sigrest said, “I’ve looked at the stars and known I want to go to space. I want to be the first person on Mars. Through research, I feel I better my personal knowledge and contribute to a community, all sharing the same goal of exploring beyond our Earth and developing the technologies necessary to get to Mars – technologies that will also benefit all humankind.”

The DBL competition is open to high school students and designed to promote student engagement in microgravity and/or space technology research. Each entrant designs an experimental payload to be launched on Blue Origin’s New Shepard rocket, and describes outreach plans to engage the public with the “promise and excitement of space,” according to the company.

According to a release from AIAA, Sigrest has been conducting independent research on rockets since middle school. She has won a number of science competitions, beginning with the grand prize, regional level, in her first science fair when she was in fourth grade, and including the Broadcom MASTERS Samueli Foundation prize at the national level with her experiment, “Rockets and Nozzles and Thrust, OH MY!”

“Design/Build/Launch is the perfect next step to complement my research of a novel microgravity slosh technique that could simplify spacecraft systems, increase payload capacity and save the space industry billions of dollars,” Sigrest said. “This opportunity provides me the chance to further this research and prepare for my own launch to Mars.”

“If aerospace is to continue pushing boundaries to create a better world for us all, we need students like Eleanor Sigrest to be inspired to take up the challenge,” said AIAA Executive Director Dan Dumbacher.

“Pushing the boundaries of technology are essential to charting our future course in space,” said Dr. Erika Wagner, Payload Sales Director at Blue Origin. “Eleanor’s passion to explore the unexplored and determination to bring clarity to science we don’t yet understand are unmatched, and we can’t wait to see how her experiment performs in space. We’re humbled to inspire students to pursue careers in STEM through payloads on our reusable New Shepard vehicle and our non-profit, Club for the Future.”

Sigrest has made presentations at the 2016 Broadcom MASTERS Science and Engineering Project Showcase in Washington, DC, and the 2017 World Science Festival in New York, NY. She leads workshops for middle-school girls, advocating for greater representation by women in STEM fields. She has been featured on NBC’s TODAY program in a “Girls Changing the World” segment and is a lifetime fellow of the American Junior Academy of Science. In May, Eleanor received the first-place AIAA “Look Up!” Award presented at the 2020 Regeneron International Science and Engineering Fair (Intel ISEF).

For winning the DBL competition, Sigrest will receive a $1,000 grant to prepare her work to fly on a future New Shepard flight. She will report on the results of her experiment at 2021 ASCEND, AIAA’s event dedicated to the space ecosystem.