Check out the new virtual reality ready mobile workstations from a familiar name. 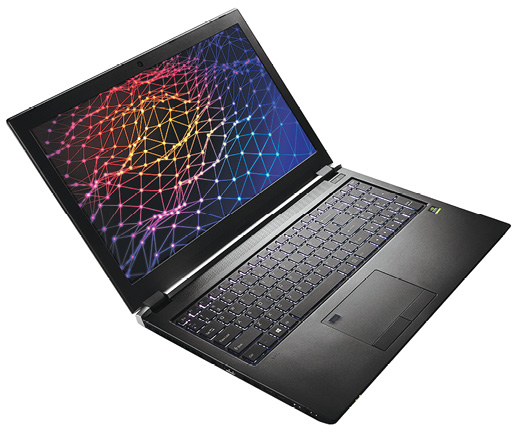 The Dell Precision 5520 packs a powerful 15.6-in. mobile workstation into a package the size of a 14-in. laptop.

PNY has long been known as a manufacturer of flash memory cards, solid-state drives, memory modules and other PC accessories as well as a reseller of NVIDIA graphics cards. The company’s product portfolio grew considerably this year, however, with the introduction of its first mobile workstations, the PREVAIL PRO P4000 and P3000. Initially announced in July at SIGGRAPH in Los Angeles, the systems became available in late November. The PNY PREVAILPRO P4000 packs a powerful 15.6-in. mobile workstation into a package the size of a 14-in. laptop.

Although the CPU includes integrated Intel Graphics 630, all three PNY mobile workstations also incorporate an NVIDIA Quadro discrete graphics card, reduced to a single chip. The two P3000 models use the Quadro P3000 (with 6GB of GDDR5 memory and 1280 cores), but the PREVAIL PRO P4000 we received includes the NVIDIA Quadro P4000. This high-end GPU, based on NVIDIA’s latest Pascal architecture, includes 8GB of GDDR5 discrete memory, 1792 CUDA parallel processing cores, a 256-bit interface and a bandwidth of 243 GB/second.

All three PNY PREVAIL PRO models provide a pair of SODIMM (small outline dual-inline memory module) memory sockets. The base model P3000 includes 16GB of RAM, installed as a pair of 8GB 2400MHz DDR4 modules while both the upgraded P3000 and the P4000 include 32GB of RAM, installed using two 16GB 2400MHz DDR4 SODIMMs. Similarly, all three versions include both a solid-state M.2 primary drive and a larger mechanical secondary storage drive. Our evaluation unit came with a 512GB Samsung PCIe M.2 NVMe drive plus a 2TB Seagate 2.5-in. 5400rpm secondary drive.

Raising the thin lid reveals the 15.6-in. display and a backlit 102-key keyboard and separate numeric keypad. A 4.25x2.37-in. gesture-enabled multi-touch trackpad with two buttons and an integrated fingerprint reader is located below the keyboard and a rectangular power button with a white LED is located to the upper right. The keyboard has a good feel with adequate travel, but lacks indicators to show when the caps lock or number lock keys are engaged.

Although the base model P3000 comes with a 2K FHD display (1920x1080), the upgraded P3000 as well as the P4000 include an anti-glare 15.6-in. 4K UHD (3840x2160). A very good 2MP (1920x1080) webcam and microphone are centered in the bezel above the display. Speakers for the integrated Sound Blaster X-Fi MB5 sound system are located beneath a grille located above the keyboard. Volume was lacking even at the highest settings and sounded quite “tinny.” Sound via headphones or external speakers, however, was of high quality.

All three versions of the PNY PREVAIL PRO provide a multitude of ports. The left side of the case houses a security lock slot, power connector, an HDMI port, two mini-DisplayPorts, two USB Type-C ports and a pair of USB 3 ports, while the right side provides an RJ-45 network port, a six-in-one card reader, a third USB 3 port, a microphone jack and a headphone/SPDIF jack. A set of four LED indicators along the left-front edge show power/charging status, battery status, hard drive activity and whether Airplane mode is enabled. The HDMI and DisplayPorts enable you to expand your workspace with up to three additional 4K displays. For our evaluation of the PNY PREVAIL PRO P4000, we ran our standard battery of tests, beginning with the SPECviewperf test of graphics performance. With the high-end NVIDIA Quadro P4000 GPU, we expected great results. And for the most part, the P4000 delivered, even achieving the best score we’ve ever recorded for a mobile workstation on one of the datasets in this benchmark. But other results lagged the similar MSI WS63 we recently reviewed (DE, September 2017), which had nearly identical specs as the P4000 but included the less powerful Quadro P3000 GPU and cost nearly $2,000 less. The same proved to be true when running the SPECapc SolidWorks benchmark.

* Editor's note: The results of the PNY PREVAIL PRO P4000 were reviewed to see if they were affected by the recent Meltdown/Spectre patch (see more here). As we have reported, the patch could be responsible for engineering computing workflow slowdowns. However, because the benchmark’s viewsets represent graphics content and behavior from actual applications, but do not test the actual applications, we cannot determine conclusively whether the Meltdown/Spectre patch had any ill effects. We did, however, find that an outdated graphics driver supplied with the review unit significantly affected the original benchmarks. The review, benchmarks and price-performance chart now represent retesting the PNY PREVAIL PRO 4000 with an updated certified graphics driver. 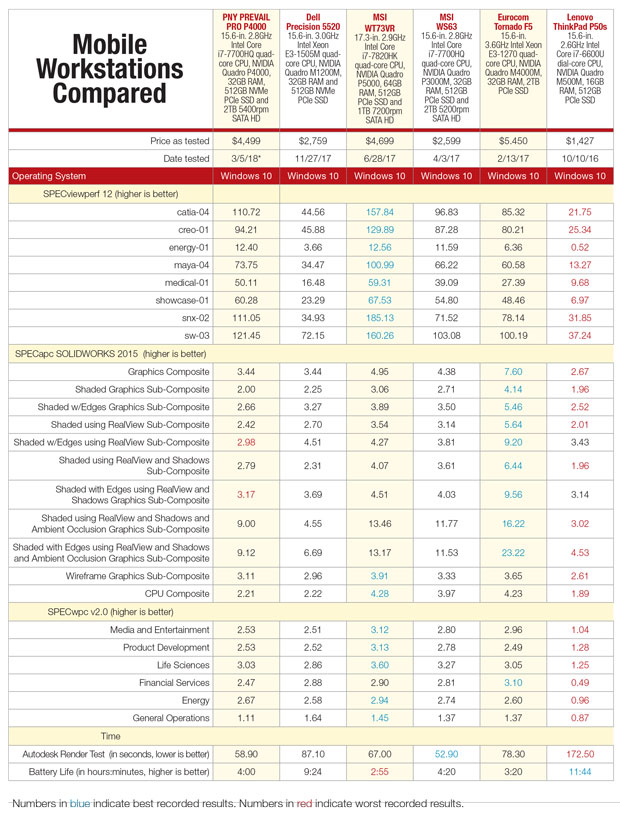 On the very demanding SPECwpc benchmark, the PNY workstation with the outdated graphics driver delivered results similar to the Dell Precision 5520. And on our own AutoCAD rendering test, the PNY PREVAIL PRO P4000 with the outdated graphics driver averaged 74.6 seconds, again placing it behind the recently reviewed MSI mobile workstations, but well ahead of the Dell 5520. Retesting the system with the updated graphics card driver again showed across-the-board improvements. The retest shaved 15.7 seconds off of our AutoCAD rendering test.

Though the system remained cool throughout our tests, its sound level reached 50dB under heavy compute loads.

PNY preloads Windows 10 Professional 64-bit and the PREVAIL PRO workstations are all ISV certified for AutoCAD, Inventor, 3ds Max, Maya, SolidWorks, Solid Edge and major products from Adobe. The standard PNY warranty provides one year of coverage (and only nine months for the battery). Upgraded Pro configurations purchased from PNY authorized resellers include a three-year warranty, while the Base configuration only includes a 1-year warranty.

Based on our evaluations of the P4000, it is clear that updating to the latest drivers should be a top consideration when firing up your new workstation. Though DE always tests workstations as they would be received by the end user, the retest of the PNY PREVAIL PRO illustrates the importance of staying up to date. That said, the new PNY PREVAIL PRO P4000 definitely establishes itself as the lightest weight and lowest cost VR-ready 15.6-in. mobile workstation currently available—a distinction likely to be very attractive.