The foundry has artists, entrepreneurs, teachers and Web developers in its 65,000 square foot makerspace.

If you were to guess where the largest makerspace in the world was located, your first thought likely wouldn’t be Columbus, OH. But when Mayor Michael Coleman cut the Columbus Idea Foundry’s (CIF’s) metal “ribbon” with a plasma cutter on May 30, the 65,000-sq.-ft. building became the largest such facility on the planet.

“I define the maker movement as people who are empowered by four tectonic plates that have converged,” says the CIF’s energetic founder Alex Bandar, who left his day job earlier this year to devote his full-time energies to the Foundry. “Those are: online education, free open-source software, digital prototyping resources, and crowd funding. Anyone who wants to start a small business is vastly more empowered to do that now than at any other time.” 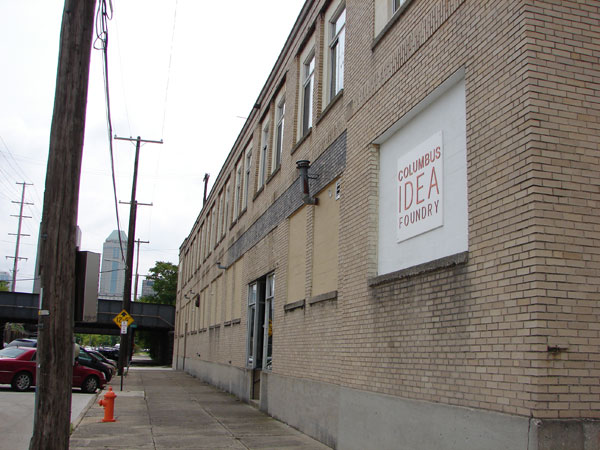 The Columbus Idea Foundry is located within sight of downtown.

And Columbus, nestled squarely in the Midwest, has a surprisingly active maker community that Bandar has been able to leverage to support the venture.

The CIF is located in Franklinton, one of the most economically depressed neighborhoods in Columbus, and obtained the new space (a 100-year-old former shoe factory and motorcycle shop) through a partnership with the Franklinton Development Association. The building is within sight of the bustling downtown, but there are boarded-up homes just a block away. CIF has a lease-to-own agreement with the development group, and its mortgage payments will be used for housing redevelopment in the area.

“The development group reached out to us,” Bandar says. “They wanted to bring a brand of technology to a neighborhood that needs it, and since the building was industrial, it gave us a lower built-out cost. It was a good fit.”

CIF received a $350,000 grant from ArtPlace America and another $84,000 from the Columbus Foundation to renovate the first floor of the building into workshops and studios. Members pay a $35 monthly fee, along with hourly fees to use the equipment within. There are classes available for members and non-members (everything from Arduino programming to welding), and you can even pay to have the CIF manufacture a prototype for you.

So far, the venture has been a success. There are now roughly 170 members, a waiting list for studio tenants, and a long-running monthly 3D printing meet-up. The current tenants include a mix of artists, entrepreneurs, teachers, machinists, Web developers and artisans making everything from metal sculptures to jewelry, packaging designs to hand-crafted wooden bowls. (One slightly off-focus tenant is an event group called “Trapped in a Room with a Zombie”.)

Bandar, who has a doctorate in computational metallurgy, originally came to Columbus to work for a tech venture. After discovering the maker movement, he built his own CNC machine using plans he found online, and launched CIF in 2008 out of a garage. Originally, he hoped to interest local schools to use his collective as a central location to teach shop courses that had been cut out of middle- and high school curriculums. 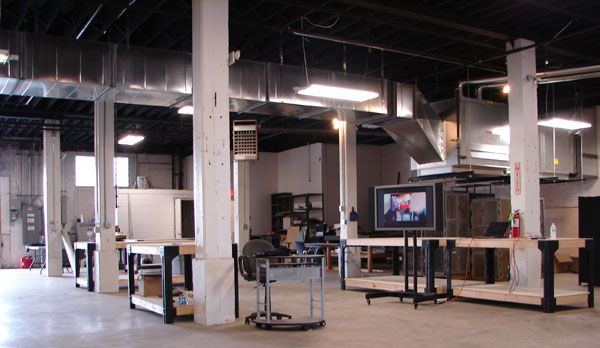 At 65,000 sq. ft., the Columbus Idea Foundry’s founder calls it the largest makerspace in the world.

The schools took a pass, but others came calling. “I discovered that there was this creative class of artists who had graduated from college and lost access to those resources,” Bandar says. “There were innovators who needed access to machines.”

The Columbus Idea Foundry features a mix of high-tech and low-tech resources, and the move into the massive new space has allowed Bandar and his team to expand that concept even further. A tour through the facility reveals 3D printers and milling machines operating just a few yards from a machine shop and a wood shop. There is space for Arduino board programming as well as a resident blacksmith, Adlai Stein, who quips “I’m the original 3D printer,” while pounding away at a red-hot metal bar.

The actual 3D printer there came from IC3D, a company whose founders met at the CIF. IC3D also manufactures its own brand of filament. Another local company with ties to the CIF, Knockout Concepts, designed the hand-held 3D scanner now in use at the facility. 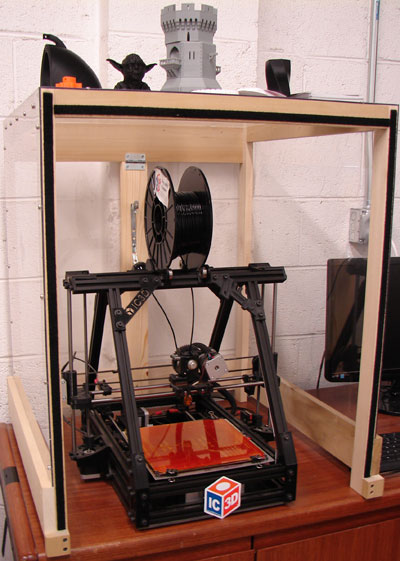 An IC3D 3D printer is available for CIF patrons to use.

Lab Partners, another resident, created a new process for jewelry casting that involves using acrylic molds that are burned out of a casting in a kiln, then filled with molten metal. “They can take prototype designs printed with a 3D printer, make a casting, and turn that into a retail-ready piece of jewelry,” Bandar says.

Bandar is trying to raise $1.25 million this year to renovate the 26,000 sq.-ft. upper floor, which will eventually house a business center and event space, as well as an industrial kitchen for 3D food printing. Walking through the space, Bandar describes how the bricked-up windows will be opened to allow views of passing trains, and self-guided robotic blimps will glide among the beams and past large video screens.

The brick basement, accessible by an ancient freight elevator, is currently rented out for storage, but Bandar has big plans for the bowels of his building. He envisions a robot battle arena, complete with basketball bleachers and green-visored odds makers. CIF currently sponsors a local high school robotics club (2013 FTC World Champions, Cougar Robotics), and the schools Bandar originally hoped to serve have now come calling to develop educational programs.