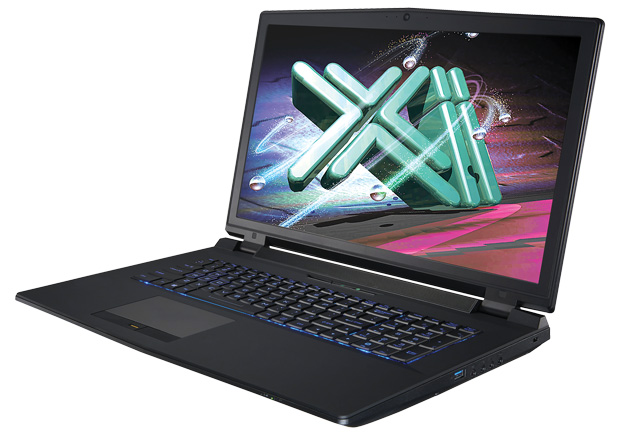 While we have reviewed several workstations from California-based @Xi Computer Corporation (pronounced “at-ex-eye”) in the past, the Xi PowerGo XT that recently arrived in our office marks the first mobile workstation the company has ever sent us. Billed as a high-end portable aimed at 3D modeling and simulation, we were quite excited to put this system through its paces.

Raising the lid reveals the display and a very good backlit 102-key keyboard and numeric keypad. A 4.25x2.4 in. gesture-enabled touchpad with a pair of buttons and fingerprint reader are centered below the spacebar. Centered above the display is a 2-megapixel webcam and microphone array. There is also a pair of speakers for the built-in Sound Blaster X-Fi MB5 sound system located in a raised perforated panel in line with the hinge, with a subwoofer on the bottom of the case. A small panel in front of this contains the power button, flanked by LEDs for airplane mode and hard drive activity lights on the left and caps lock, scroll lock and number lock on the right. And as we have seen in other similar systems, you can control the intensity of the keyboard backlighting using function key combinations or open a special utility program to change the backlight color and lighting effects as well as program hotkey combinations to launch other programs.

A Wealth of Options

The right side of the case offers a single USB 3.0 port; an S/PDIF-out jack; audio ports for headphone, microphone and line-in, and a security lock slot. The left side provides an RJ-45 network port, two additional USB 3.0 ports, a USB 3.1 (Type C) Thunderbolt 3 port, a 6-in-1 SD card reader and a combined eSATA/USB 3.0 port that remains powered for recharging devices even when the system is off (as long as the computer is connected to a working A/C outlet). The rear panel hosts a single HDMI port, two DisplayPorts, and the connection for the external power supply, flanked by a pair of air vents. There are many additional air vents on the bottom of the case. There is no optical drive bay. Instead, @Xi sells optional external DVD and Blu-ray drives. The Xi PowerGo XT is not quite as closed as several other systems we’ve recently received, however. In addition to being able to remove the battery, users can easily loosen two screws and remove a panel to access the internal drive bays.

Our evaluation unit came equipped with an Intel Core i7-6700K, a 4GHz quad-core CPU with 8MB cache, a maximum turbo frequency of 4.2GHz, and a thermal design power (TDP) rating of 91 watts. This 14nm Skylake processor, which added $169 to the base price, also includes Intel HD Graphics 530. Several other less expensive CPUs are also available. @Xi also equipped our system with a high-end NVIDIA Quadro M5000M mobile GPU, with 1536 CUDA (compute unified device architecture) cores and 8GB of dedicated GDDR5 memory, increasing the system cost by an additional $1,999. The Quadro M4000M ($499) is also an option as well as a choice of three NVIDIA GeForce GTX graphics cards.

As previously noted, our system came with a 1920x1080 display. Although both the 15.6-in. and 17.3-in. versions of the PowerGo XT are available with 3840x2160 displays, those higher-resolution panels cannot be selected when an NVIDIA Quadro graphics board is included.

While 8GB of 2133MHz memory comes standard, the Xi PowerGo XT can accommodate up to 64GB of RAM. Our evaluation unit included 32GB, installed as four 8GB 2666MHz DDR4 modules, adding $299 to the system price.

There are also many storage options. Rather than the 500GB 5400rpm SATA drive in the base configuration, our evaluation unit came with a 256GB solid-state Samsung MS951 M.2 PCIe drive, adding $149. The PowerGo XT can actually accommodate two 2.5-in. hard drives in addition to an M.2 solid-state drive (SSD), and supports RAID 0 or 1 configurations. @Xi offers 16 different drives ranging from 250GB to 4TB.

You can also upgrade from the standard built-in gigabit Ethernet LAN and Intel dual-band wireless AC 3165 Wi-Fi/Bluetooth module to one of two higher-end M.2 network modules. An 8-cell lithium-ion battery comes standard and kept our evaluation unit running for two hours 30 minutes before shutting down. Throughout our tests, the Xi PowerGo XT ran cool and quiet, averaging just 31dB at rest (compared to 29dB ambient background noise), climbing to just 42dB under compute loads (less than the volume of a typical office conversation).

With its speedy CPU and high-end NVIDIA graphics, the Xi PowerGo XT turned in some of the best performance we have recorded to date for a mobile workstation, tying or beating the Eurocom Sky DLGX7 we recently reviewed on most of the datasets in the SPECviewperf tests. On the SOLIDWORKS test, the Xi PowerGo XT was the clear winner, surpassing every other mobile workstation we have ever tested. 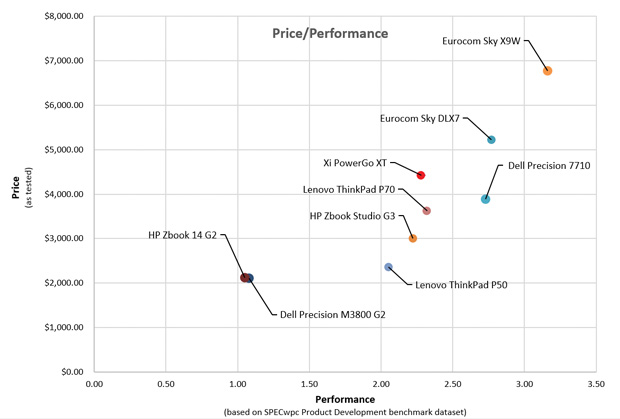 On the very demanding SPECwpc benchmark, this @Xi mobile workstation turned in some of the best scores on many of the individual tests, although it did not garner top honors in any composite category. On our AutoCAD rendering test, the 53.10 sec. average rendering time was just barely edged out by the Lenovo ThinkPad P70, which remains the mobile rendering king.

Despite its high-end components, as equipped the Xi PowerGo XT costs $4,423 (including $59 to upgrade from the base Windows 10 Home operating system to Windows 10 Professional), $800 less than the Eurocom Sky DLGX7. That price also includes @Xi’s standard warranty, which covers labor for three years but only one year on system parts. This can be extended to two or three years for an additional $149 or $239, respectively.

Like similar systems, the Xi PowerGo XT is meant to be a desktop workstation replacement. Its high high-end components deliver great performance, but at the price of weight, cost and limited battery life compared to offerings from more mainstream manufacturers. As such, it is likely to appeal to a smaller set of users for who value speed more than price. For them, the Xi PowerGo XT definitely delivers.