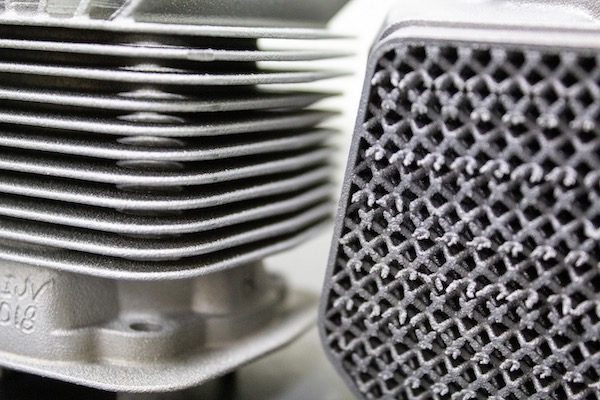 Cobra Aero tapped the Renishaw AM 400 to produce a redesigned UAV engine. Image Courtesy of Renishaw

The ability to quickly iterate designs to keep pace with a highly competitive landscape drew Cobra Aero, a small specialty engine manufacturer, to metal 3D printing technology. After moderate success with its initial applications, Cobra Aero decided to go all-in with the technology, including investing in a partnership and its own equipment to make metal AM a fixture in its long-term manufacturing flight plan.

Cobra Aero began its AM parts journey via a partnership with Renishaw, which helped produce a handful of parts for aircraft and motorcycle engines on the metal AM provider’s internal printers. While Cobra Aero was happy with the results, it soon became clear that in order to reap metal AM’s full benefits, including the ability to consolidate parts and improve performance, the company was going to have to kick it up a notch and start the process of redesigning and optimizing parts.

“As they learned more about the process, they realized it’s more complicated than it looks,” says Kevin Brigden, AM advanced concepts at Renishaw. “They became disposed of the notion that you can take any geometry and throw into the machine to get what you want.  They needed to modify designs to be more printable and achieve greater performance gains.”

Cobra Aero targeted an engine cylinder for an unmanned aerial vehicle (UAV) as the first candidate for part redesign. “It made the most sense to start there because that’s where most of the design changes happen rapidly, it’s where the highest tooling costs are, and where performance is locked into the engine,” said Sean Hilbert, president of the firm, which makes about 2,000 engines a year for a range of different customers, in a video discussing their application.

The original cylinder design required a significant number of support structures in order to print with metal AM, which complicated the process since it took a lot of time and effort to remove them. In addition, despite post processing work, the finished parts didn’t look as professional as the company wanted.

Working with the Renishaw team, Cobra Aero redesigned the UAV engine cylinder with a complex lattice structure that boosted performance by improving airflow. The unique capabilities of metal AM allowed for a design of three separate passage ways that enabled the head, the hottest part of the engine, to be cooled differently than other areas. “We could never do that with casting,” Hilbert said. Renishaw’s AM 400 system, which Cobra Aero eventually purchased, also allowed for a highly accurate production with no gap between printed and machine surfaces, he added.

At the same time, the redesign enabled Cobra Aero to consolidate multiple components into a single lightweight part. “The end result was a much more compact component that was easier to assemble as an engine,” Renishaw’s Brigden says.

In addition to Renishaw, there were other partners in Cobra Aero’s part redesign efforts—a trend Brigden expects to intensify as companies go deeper into metal AM for production. “Collaboration is critical to adopting this technology,” he says. “Ultimately, so much of the competitive advantage with these machines comes down to applications rather than economics.”

Watch this video to hear more about Cobra Aero’s metal AM partnership with Renishaw.