When the Stratolaunch aircraft rolled out of the Mojave, California Air and Space Port hangar this spring in preparatio for ground testing, it was an example of the current status of design and manufacturing of composite materials, according to Collier Research. Last month the first phase of engine testing on the aircraft’s six Pratt & Whitney turbofan engines was completed.

The sizable aircraft (its wingspan is wider than a football field is long) is almost entirely fabricated from composite materials, which provide light weight, high stiffness and strength characteristics used in aerospace, automotive, sports, medical and industrial fields. 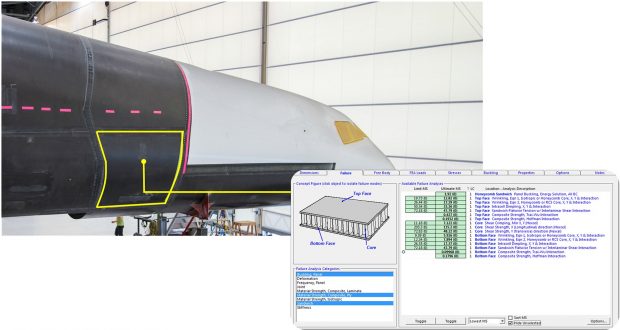 The Stratolaunch aircraft has two fuselages connected by a giant single wing and is powered by six engines that will enable it to take off from a runway carrying a payload of up to 550,000 lbs. At the cruising altitude of a commercial airliner, the Stratolaunch air-launch platform will release the space launch vehicle payload and return to the airport for reuse. The first launch demonstration is anticipated to take place as early as 2019. 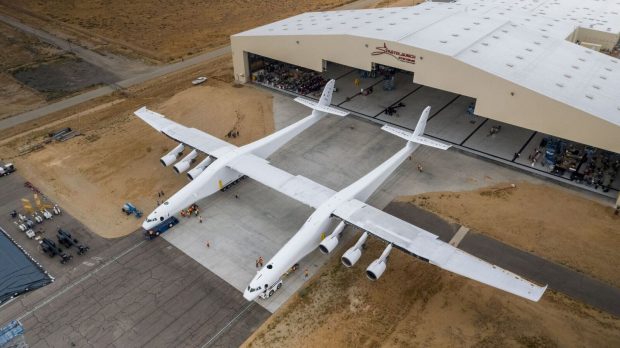 In the case of the Stratolaunch air-launch platform pictured above it was essential to take as much weight out as possible—while still achieving flight certification. Image courtesy of Collier Research.

For the Stratolaunch wing, deflection limits were a significant factor. The panels of the duel fuselages were sized for strength, stability and honeycomb sandwich failure modes. By using HyperSizer, the stress team had access to a comprehensive set of automated failure analyses that includes rapid free-body analysis,  discrete laminate sizing, ply-based composite failure analysis, honeycomb sandwich analysis methods such as wrinkling, core shear, flatwise tension and intracell dimpling, and scripting API to push in loads from Excel spreadsheets.