Kubotek3D, a supply chain software provider, announces that the Kubotek Kosmos 3D Framework has been updated to version 3.0. The framework is a set of advanced, multi-platform software components that maximize a program’s performance and ability to work with complete engineering models and data from all major MCAD databases. The Kubotek Kosmos 3D Framework supports software developers building precise 3D applications that need to work with engineering models and data.

The Kubotek Kosmos 3D framework provides support for reading engineering models and data from over a dozen major file formats. For the 3.0 release, the framework has expanded its support of STEP files.

The release added read and write support for STEP AP 242 model-based definition (MBD) data. STEP AP 242 is an ISO standard that defines precise 3D models as well as critical manufacturing annotations including Geometric Dimensioning and Tolerancing (GD&T) and their relationship to the faces of the model. This form of MBD can provide process efficiency by eliminating the need to translate the design into detail drawings and better support automation of downstream activities such as NC machining and inspection. 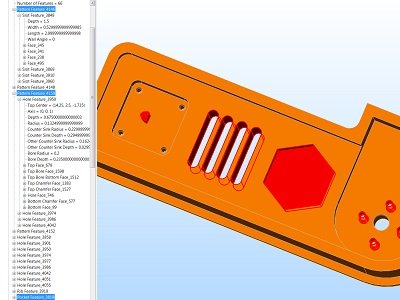 Kubotek Kosmos performance stands out from other 3D modelers due to its unique unconstricted support for multi-threaded processing. For the 3.0 release, additional areas of the code have been further optimized.

The framework fully supports development of applications to run on numerous platforms. With the 3.0 release the following capabilities have been enhanced to enable broad platform support.

“Our development team has continued to expand and refine the Kubotek Kosmos framework in many important areas,” says Ram Eswaran, CTO/COO of Kubotek3D. “This year our proprietary STEP translation capabilities have improved to support MBD initiatives in manufacturing supply chains with critical feature, tolerance, and surface finish details.”