This systems integrator delivers a winning workstation at a very competitive price.

This systems integrator delivers a winning workstation at a very competitive price.

Last year, we reviewed our first-ever workstation from Velocity Micro, the very fast, very expensive ProMagix HD80A (DE, July 2018), based on an AMD Ryzen Threadripper CPU. This Richmond, VA-based company, founded in 1992 by a techie and entrepreneur who began assembling custom computer systems to run CAD and other demanding applications, now builds systems for a wide range of uses including gaming, home, office, home theater and driving simulations.

This time around, Velocity Micro sent us its ProMagix HD60, an Intel-based system housed in a charcoal gray mid-tower mATX case measuring 7.2517.25x17.38 in. (WxDxH) and weighing 23 lbs. The front of the case has an austere appearance, with only the company name and logo etched into the upper portion and a Velocity Micro logo cutout near the bottom.

The power button, a pair of USB 3.1 ports, plus microphone and headphone jacks are all located on the top of the case, set several inches back from the front edge. A pair of fans are also visible below vents on the top of the case. The fans, power button and front panel logo all glow when the system is powered up. Unlike last year’s system, however, the ProMagix HD60 ran quiet, averaging 45dB at rest and climbing to just 64dB under heavy compute loads.

The thin left side panel, held in place with eight snap connectors, takes very little effort to remove. Inside, we found a well-organized interior with four internal drive bays, one of which was filled. 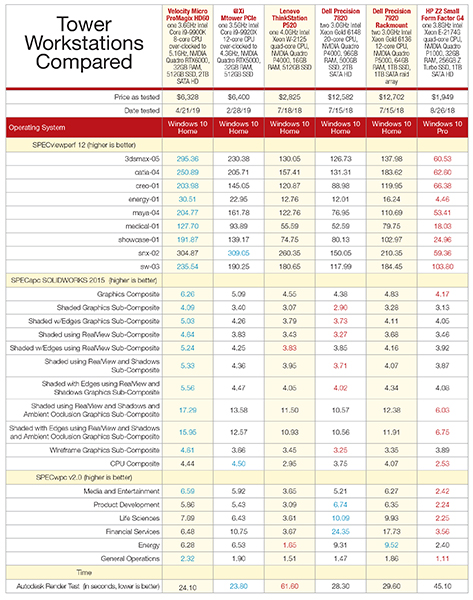 On its website, Velocity Micro lists a starting price of $1,149 for its ProMagix HD60. But as was true for the system we received last year, the company sells HD60 systems based on both AMD and Intel processors and houses them in either a full or mid-tower case. So, when configuring a system, first choose your CPU and tower options, and the mid-tower Intel system is the least expensive starting point.

Assembling a PC isn’t that difficult if you have the parts—it just takes time. And since all the components used by Velocity Micro and other system integrators are readily available, we always wonder if it makes more sense to have someone else assemble the system or if you would be better off doing it yourself. Here’s what we found for the ProMagix HD60:

Clearly, the NVIDIA Quadro RTX 6000 GPU is the big-ticket item, accounting for nearly 70% of the total cost. But good luck finding one at its $4,000 suggested retail price; those retailers that have them in stock currently charge hundreds more. Since the do-it-yourself price is just a few hundred dollars less than what Velocity Micro is charging for this system (less the extended warranty), having the ProMagix HD60 built for you by trained technicians and backed by an all-inclusive warranty seems like a no-brainer.

That case selection gets you an all-aluminum MX3 mATX chassis manufactured by Lian Li, with the power supply mounted at the bottom rear. Although the base configuration includes a 500-watt power supply, our evaluation unit came with an 850-watt EVGA SuperNova 80Plus Gold Certified model, able to support power-hungry components. That power supply adds $145 to the base price.

Our system came with 32GB, installed using two 16GB Crucial Ballistix memory modules, which added $220 to the price. That motherboard also provides four expansion slots: One PCIe 3.0 x16 slot, one PCIe 3.0 x8 slot, and a pair of PCIe 3.0 x1 slots. An Intel wireless-AC 9560 adapter, which supports 802.11 a/b/g/n/ac plus Bluetooth, is integrated into the MSI motherboard.

The base HD60 system also includes an Intel Core i3-9350K CPU, a four-core 4.0GHz processor. Velocity Micro offers eight other choices, including the eight-core Intel Core i9-9900K that was included in our evaluation unit (adding $475). That Coffee Lake CPU has a base frequency of 3.6GHz and a maximum turbo frequency of 5.0GHz, and a 16MB smart cache. Velocity Micro then overclocked the CPU to 5.2GHz on one core and 5.1GHz on the other seven cores.

The base system also comes with a simple Intel heatsink and a pair of 120mm exhaust fans, but to cool the overclocked CPU in our system, Velocity Micro added a closed-loop liquid cooling system with a 240mm intercooler and a pair of blue-lighted 120mm fans, adding another $155. A similar system without lighted fans is $45 less. The intercooler was mounted to the bottom of the case, drawing intake air through a removable dust filter.

Though all the Intel CPU choices include built-in graphics, the base HD60 configuration includes an NVIDIA Quadro P400 graphics processing unit (GPU). Velocity Micro also offers more than a dozen other graphics cards from NVIDIA, including both Quadro and GeForce boards.

Our evaluation unit came with the new NVIDIA Quadro RTX 6000 GPU. This ultra-high-end board, which added $3,375—considerably less than its $4,000 suggested retail price—is one of the new Turing-based GPUs introduced late last year. The Quadro RTX 6000 provides 4,608 compute unified device architecture (CUDA) cores, 576 Tensor cores and 72 RT cores and 24GB of discrete GDDR6 memory. With a 384-bit interface, the board can deliver a memory bandwidth of up to 672 GB/second, enabling it to achieve 16.3 million single-precision floating point operations per second, to trace as many as 10 billion rays per second and perform real-time ray tracing.

The GPU provides four DisplayPort 4.1 connectors as well as a VirtualLink connector, essentially a USB Type-C port designed to deliver power, display and data to power a virtual reality headset. Since this is a dual-slot board, it blocks access to one of the PCIe x1 slots, and since the board consumes 295 watts, it requires a 14-pin auxiliary power connection.

The base HD60 system also comes with a 250GB solid-state drive (SSD), but here again, Velocity Micro offers lots of choices, including SSDs of up to 2TB, Intel Optane drives up to 960GB, and standard hard drives up to 8TB. The system we received included a 512GB Samsung 970 Pro PCIe NVMe M.2 primary drive (adding $155) and a 2TB 7200rpm Seagate Barracuda 3.5-inch SATA drive ($85). The system can host two M.2 drives plus up to four SATA drives and supports RAID 0 and RAID 1 for M.2 drives and RAID 0, RAID 1, RAID 5 and RAID 10 for SATA drives. 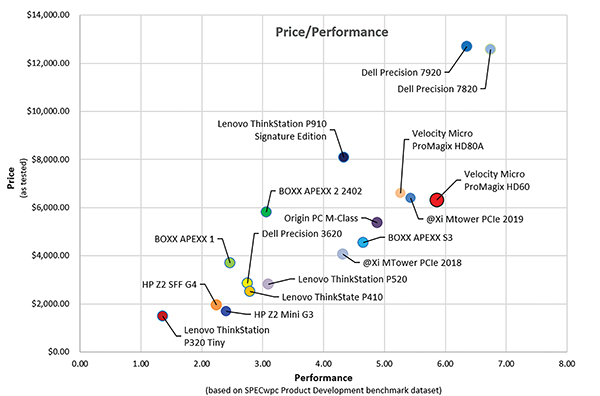 The base system also includes a DVD+/-RW drive. Although the system we received did not include an optical drive, a Velocity Micro representative informed us that they have switched to a modified version of their mid-tower case, the MX4, which will include a front-panel drive bay.

With all of its high-end components, including an overclocked eight-core CPU and ultra-high-end GPU, we couldn’t wait to put this Velocity Micro workstation to the test. Happily, the ProMagix HD60 lived up to our expectations.

On the SPECviewperf benchmark, which focuses on graphic performance, the ProMagix HD60 turned in the best results we have ever recorded on all but one dataset, on which it finished a close second. On the SPECapc SolidWorks benchmark, the Velocity Micro system also performed well, earning some top scores.

The same proved true for the very demanding SPECwpc workstation performance benchmark, on which the system garnered the top scores in three of the six test suites representing vertical markets that often have very different computing demands. And on our own AutoCAD rendering test, the 24.1-second average time was just 0.3 seconds behind the record-setting @Xi MTower we recently reviewed.

Velocity Micro preloads Windows 10 Home, or you can get Ubuntu Linux for the same price. The Windows 10 Professional 64 pre-installed on our system added $70, or you can save $80 by ordering the system without an OS and install your own. Velocity Micro also does not include a mouse or keyboard unless you specifically add one to your order. You can get various keyboards and mice at the time of purchase. We included a basic Microsoft USB keyboard and optical mouse ($15 each) in our as-tested price.

Although the standard warranty only covers the system for one year, the company does offer other options. Our as-tested price includes a $299 charge to extend coverage to three years for parts, labor and depot repair service. Velocity Micro also includes a lifetime upgrade plan that allows you to return your system for maintenance, upgrades and tuning.

As configured (including the input devices, Windows 10 Pro, NVIDIA Quadro RTX 6000 GPU, and the three-year warranty), our system priced out at $6,328, making it a bit less expensive than several other systems we have tested recently, while delivering better performance.

Although equipped with certified hardware, the system itself lacks independent software vendor certification. If that is not an issue for you, Velocity Micro has proven once again that it knows how to assemble a high-end workstation. But this time around, the high price is actually a bargain considering what’s included. If you are looking for premier performance without spending six figures, the Velocity Micro ProMagix HD60 is definitely worth considering.