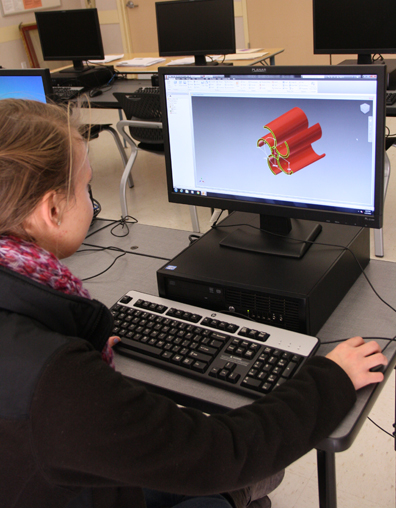 Sophi Leporte (age 17) first came in contact with CAD in a class at Terra Linda High School, San Rafael, California. The students were asked to design their own wind turbine, to be printed out later in a 3D printer.

“Though it was a little tough to begin with, I found that once I grasped the concepts, I could move easily around the software, designing my model,” she recalled.

She continues to use the same software, Autodesk Inventor. “The software is pretty simple to understand after a couple of trials, and from there experimentation can help out so much in understanding boundaries and different ways the software works,” she said. “I love that Inventor has so many different options. I honestly could never have imagined that one computer program could accomplish so much before I was exposed to inventor. I also love that it uses not only creativity but also a base of mathematical knowledge to run. Using Inventor, I can blend together my love for expanding and using my imagination with my fondness of logic to create designs.”

She’s currently putting her modeling skills to the test by building a complex roller coaster, quite possibly “the craziest thing” she’s ever designed.

Sophi’s vision of a dream CAD program, one that works the way she feels it should, is inspired by what she saw in Hollywood blockbusters. “In The Hunger Games, the game makers can control a stadium by looking at the 3D model in front of them and adding or taking away things,” she reflected. “I would do something like this if I could make my own software.”

Something in the Iron Man films (beside Tony Stark, played by Robert Downey Jr.) also caught Sophi’s attention. It was the way Stark interacted with his holographic design software. “Similar to Tony Stark’s software use in Iron Man—a 3D visual with a touch screen to add or take away or expand anything. That would be really cool,” she observed.

So far, no commercial holographic CAD solution exists in the market. The closest may be the stereoscopic augmented-reality display from zSpace. It works with a pair of stereo goggles, a tablet-like display, and a stylus as a pointing device. (For more on zSpace and gesture-based modeling, read my previous article “Gesture-Based Design Engineering,” October 2013.)

It’s worth paying attention to what Sophi and her peers have to say about how they prefer to interact with their design software. In less than a decade, they’re the ones who will fill the vacant posts in design, engineering, and manufacturing firms.

Sophi admits she knows lines from the movie Finding Nemo by heart. She’s exploring a range of topics—from calculus and journalism to engineering—to find out what she wants to pursue after school.