This new 32-in. in-plane switching ASUS ProArt Display PA329CV Monitor delivers great images at an affordable price. The LED panel is surrounded by an extremely thin bezel measuring just 0.06-in., except along the bottom where its 0.81-in. width incorporates a panel in the lower-right corner that provides access to the various monitor controls. 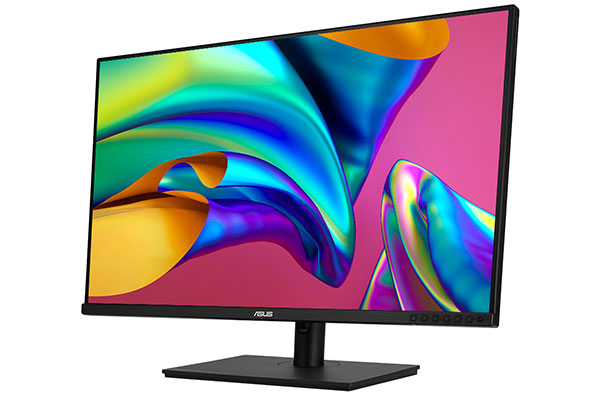 The new ASUS ProArt Display PA329CV is a 32-in. IPS monitor that produces very good images at an affordable price. Image courtesy of ASUS.

We spend countless hours in front of our monitors, yet it has been many years since we last reviewed a new display aimed at content creators. So, we were quite excited when ASUS recently sent us its new ProArt Display PA329CV, a 32-in. widescreen backlit in-plane switching (IPS) LED display that is beautiful and affordable.

The monitor arrived neatly packed in a single box. In addition to the panel itself, the package contained a tilt/swivel stand and base, a separate C-clamp for desk mounting (instead of the base) and three non-power cord cables (DisplayPort, HDMI and USB Type-C).

It took just a few minutes to assemble the two-piece stand, attach the display to the stand and connect the monitor to a pair of test computers. The entire display weighs 28 lbs. and measures 24x28.6x9.6-in. (HxWxD) at its full height in landscape mode, when mounted on its 13.25x9.63-in. base.

You can attach the C-clamp to your desk and mount the monitor stand to it rather than to the large rectangular base. The panel also incorporates a standard Video Electronics Standards Association 100x100-mm mount, allowing the panel to be wall-mounted or attached to other supports.

The stand enables a tilt range from -5° to +30°, 60° of swivel, and a height adjustment range of 5.12 in. Despite its size, when raised to its maximum height, the panel easily swivels from landscape to portrait mode. You can route cables through an oval slot near the bottom of the vertical stand, but they will remain visible unless the monitor is at the bottom of its height range.

The LED panel is surrounded by an extremely thin bezel measuring just 0.06-in., except along the bottom where its 0.81-in. width incorporates a panel in the lower-right corner that provides access to the various monitor controls.

The IPS panel also has a viewing angle of 178° in the horizontal and vertical directions, and its 5-ms response time (gray-to-gray) reduces image smearing to a bare minimum. Its 10-bit color depth means the panel supports the typical 16.7 million colors (100% sRGB and 100% Rec. 709 color gamut), rather than the more than 1 billion colors found on high-end 30-bit displays. But the ProArt Display PA329CV costs a fraction of the price of those panels aimed at the most color-critical applications.

The ASUS ProArt Display PA329CV provides a typical selection of connections. A downward-facing panel on the rear of the display provides four input connections—two HDMI 2.0, one DisplayPort 1.2 and a USB-C port—as well as a 3.5-mm audio output jack, a pair of USB 3.1 Type-A ports, the A/C power connector and an on/off switch.

There are also two additional USB 3.1 Type-A ports on the left side of the monitor. The integrated USB-C port supports data transfers, DisplayPort and also supports 90-watt power delivery. When you connect to the PA329CV using USB-C, the USB 3.1 ports become available so that the monitor can also serve as a USB hub. The monitor does not automatically sense the source, so you will need to manually select the input.

You can use the control buttons to adjust various image settings, with dedicated buttons for power, presets, signal input, blue light level and brightness, plus a joystick-style button for navigating through all the on-screen display (OSD) features.

The OSD was not the most intuitive and was slow to respond, but proved to offer quite a few functions. There are 11 different preset modes: Standard, sRGB, Rec. 709, DCI-O3, Rapid Rendering, HDR, DICOM, Scenery, Reading and two user modes. With the joystick, you can also adjust the color palette, brightness, contrast, saturation, hue, color temperature, image sharpness and OSD settings.

The monitor includes built-in speakers, so you can use the OSD to adjust the volume, select which source input the sound comes from and mute the audio. The QuickFit Plus feature provides an on-screen grid as a guide to view and edit artwork and photos at their actual size.

The ASUS ProArt Display PA329CV also supports picture-in-picture (PIP) and picture-by-picture (PBP). With PIP, the image from one video source takes up the majority of the display, with the image from a second source displayed in a small window located in one of the four corners. You can control the location of the smaller window as well as select its size (small, medium and large). With PIP and PBP, you can also select the source for both signals, but only one signal can come from HDMI (with the other coming from either the DisplayPort or USB-C input).

In addition, with PBP, the two video sources are located side by side. But since the monitor maintains the aspect ratios of the two digital video sources, the resulting display fills an area centered across the width of the screen, with wide black bands above and below the two images. We doubt either the PIP or PBP will be particularly useful in engineering applications.

The ASUS ProArt Display PA329CV comes with a Calman Verified certification report, so that you can be assured its colors were accurate when it left the factory. Once we had the monitor set up and connected to our test system, we used a series of test patterns to uncover any picture quality problems or video artifacts that might otherwise go unrecognized.

The ProArt PA329CV displayed excellent color and gray scale and showed no pixel defects. We were able to read text down to 6 points even at different intensity levels and the monitor’s fast response time resulted in minimal image smearing when viewing full-motion video.

The onscreen image does not automatically change when you rotate the panel between landscape and portrait modes; you must change the display orientation via the computer’s system settings. Sound from the built-in speakers was quite tinny.

ASUS backs the ProArt Display PA329CV with a 3-year warranty that includes a Zero Bright Dot warranty on the panel, repair or replacement, and free two-way ground shipping for the United States and Canada. With a suggested retail price of $799, the ASUS ProArt Display PA329CV is quite affordable and delivers a very nice product. Purchasers also get a free 3-month Adobe Creative Cloud subscription that can be applied to a new or existing account, which makes the PA329CV an even better deal.