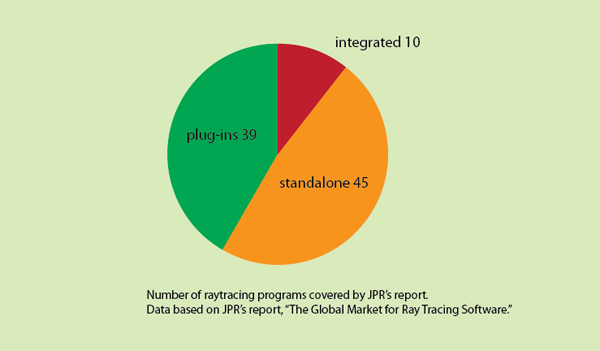 JPR’s new report on the use of raytracing covers three classes of software (chart created based on JPR data).

Toggle3D Unveils Big Tech Advancements
Toggle3D enables the creation, design, configuration and deployment of 3D models at scale, using...
3D Rendering Market Expected to be Worth USD$12.52 billion by 2029
To achieve a substantial market share in the worldwide 3D rendering market and strengthen their...
What’s New in Arnold?
Autodesk product enables optimization of rendering and much more.
V-Ray 6 for Rhino Beta Released
V-Ray 6 for Rhino includes the ability to bring real-time Enscape scenes into #VRay and a...
More Rendering

Jon Peddie Research (JPR), which specializes in the graphics technology sector, recently published a report on raytracing, a physically accurate rendering technology now in use in product design, manufacturing, architecture and entertainment.

The Global Market for Ray Tracing Software report puts the raytracing market's CAGR (compounded annual growth rate) for market value at 5%. By 2023, the market “should be almost a quarter of a billion dollars,” according to JPR's estimates.

Measuring the market growth by usage, however, shows a much more aggressive rise. As shown in the chart, the report estimates the CAGR of raytracing use in rendering at 53.7%. 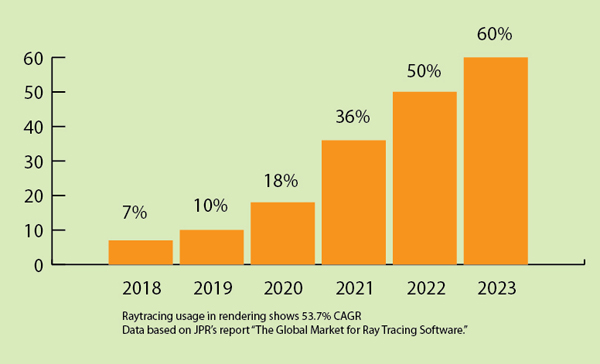 JPR's new report shows the use of raytracing in rendering is growing at 53.7% CAGR (chart created based on JPR data).

Raytracing involves accurately calculating the trajectory of light rays as pixels, which results in realistic depiction of lights and reflections in computer-based image rendering. In product design, raytraced renderings are now part of design reviews, simulation, and marketing initiatives.

JPR points out, “For certain types of design, ray tracing is not desirable but demanded. For example, in the design of optical systems (lens, mirrors, and other components), jewelry design, lighting fixtures, and lamp design. In addition to such physical designs, there is a field of ray tracing for wave and field design in radio and acoustics. In these examples, the design, and resultant images and data must be absolutely physically accurate and photorealistic.”

The compute-intense method demands sophisticated memory management, parallel processing and greater horsepower in processors. Raytraced rendering software programs benefit from the processor technology advancements. They also push the hardware's limit with new features and algorithms that harvest the additional horsepower. The market is thus propelled by the tug of war between leading hardware and software makers.

“This year is mostly hardware – mostly, not totally,” noted Jon Peddie, president of JPR. “Nvidia’s big announcement about RT acceleration with their new Turing GPU has gotten a lot of people excited in both the gaming and professional space.”

JPR's new report on the use of raytracing in rendering covers three distinct categories of software (figure created based on JPR data).

“We’ve identified 70 suppliers of ray tracing programs. Popularity, as measured by sales would make standalone suppliers most popular,” observed Peddie. “But integrated programs like Autodesk’s Arnold warp the answer. Arnold, as an example, can be had for free, or almost for free, and is tightly coupled to several Autodesk products like 3dsmax, and Maya. Popularity by number of users is difficult to measure, and compounded by the fact that often a user will use more than one program. That is usually due to the selections available for materials, lighting control. and global illumination (GI).”