The annual Hannover Messe is one of the world’s largest engineering and manufacturing industrial trade shows.

The annual Hannover Messe is one of the world’s largest engineering and manufacturing industrial trade shows. This year more than 220,000 visitors—one-third from outside Germany—swarmed the 23 halls in late April to see the casting and injection samples, rows and rows of standard parts, and a variety of race cars on display more to attract the attention of German Formula 1 enthusiasts than to showcase any specific engineering prowess. But this year’s Hannover Messe was also a trade show about the role of data in manufacturing: how to make it, how to store it, how to transmit it.

The emphasis was more on IIoT—the industrial internet of things—than the consumer-oriented IoT. Much of the discussion was about convergence of IT into mechanical engineering, including new IT platforms such as blockchains, and the rise of artificial intelligence in both the creation and use of products.

Every year Hannover Messe selects a partner nation; this year it was Mexico. Attendees who paid attention—after all, there are plenty of distractions—learned Mexico has 94 R&D centers devoted to IoT, advanced manufacturing and Industry 4.0; ranks third in the global Digital Transformation Index and eighth in the global Renewable Energies Investment Index.

Fujitsu IOTA demo Hannover: Fujitsu demonstrated a possible use case for cryptographic distributed ledger technology, showing how the cryptocurrency technology IOTA could create a hands-off system to tag and track a product from assembly to deployment. Image courtesy of Randall Newton.

Blockchain technology was at the show, but with one exception—it was not given prominence by vendors. Fujitsu devoted one section of its very large booth to a “use case” of IOTA distributed ledger technology. Fujitsu representatives were quick to point out that there was no formal relationship between the company and the IOTA Foundation, which develops the open-source cryptocurrency project.

In the demonstration, which took up nine connected screens and a miniature assembly line in the booth, Fujitsu demonstrated an end-to-end use case for tracking manufactured products as they roll off the assembly line.

Strictly speaking, IOTA is not a blockchain; instead it builds a distributed ledger using a technology it calls the “tangle.” The cryptographic proof of work cycle in IOTA requires each transaction to validate two previous transactions. It is a “feeless” approach, which IOTA enthusiasts say make it an ideal cryptographic solution for industrial applications, where microtransactions could happen by the millions. 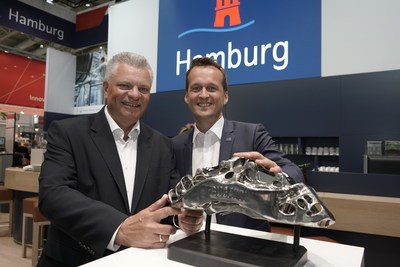 Other companies demonstrating or at least willing to discuss the use of IOTA or other blockchain technologies for industrial use included Schneider Electric, PROSTEP, Bosch, IBM and Microsoft. Schneider Electric’s Jason Dudek shared a comprehensive SCADA test case involving food shipment from processing plant to store. Each product or shipment was assigned a unique ePassport that could be examined at anytime by any company in the supply chain. Dudek says the creation of an open and immutable data chain offers new potentials for tracking product beyond today’s solutions.

PROSTEP is working on a PLM-oriented blockchain solution for 3D printing which PROSTEP’s Dr. Martin Holland calls “a license to print.” A smart contract would be generated for a 3D print file, specifying rights and limitations to print the file. PROSTEP is reaching out to 3D printing hardware vendors to create the method, called Global X, and an industry standard. Martin, who has been in the PLM business since its earliest days in the 1990s, is emphatic in describing the possibilities for blockchain technology in manufacturing: “distributed trust will change the world.”

Ten years ago aeronautics engineers were the only ones talking about a digital thread, envisioning a model-based technology to drive fuselage assembly using composites. Today “digital thread” and “digital twin” are becoming IIoT’s Castor and Pollux, twins with features both earthy and ethereal. Examples on display in Hannover include the following:

The next generation of wireless cellular technology, 5G, also was a major theme at Hannover Messe.  A new industry consortium,  The 5G Alliance for Connected Industries and Automation (5G-ACIA), made its formal debut in Hannover. 5G-ACIA is meant to become a global collaboration and standards forum. Charter members come from both sides of the user/provider continuum: automation, engineering and process industries; and telecom operators, vendors and suppliers. Several scientific institutes are also charter members.

“5G will become the central nervous system of the Factory of the Future and will have a disruptive impact on industrial production,” says Andreas Müller of Bosch, chairman of 5G-ACIA. “For the first time, the 5G-ACIA brings together all the major players worldwide. This enables us to work in a concerted and targeted manner to ensure that the interests of the industry are taken into account accordingly.”

The activities of the 5G-ACIA are currently divided into five working groups:

“5G will help evolve many industries and the development of the technology supports the need for multipurpose solutions driven by the variety of use cases,” says Mats Norin, program manager 5G for Industries, at Ericsson. “We need to create the ecosystems that are required for early adoption, and new partnerships and alliances, such as 5G-ACIA, are essential to this process.”