The Sky X7W weighs in lighter than the Tornado F7W, but packs just as much power, company says.

The Sky X7W weighs in lighter than the Tornado F7W, but packs just as much power, company says. 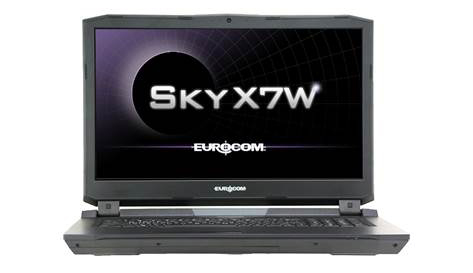 Eurocom’s supercomputer class, mobile workstation, the Sky X7W, is designed for engineering on-the-go and has gotten lighter than its predecessor. Having just as much hardware power despite weighing half a pound less than its big brother, the Tornado F7W Eurocom picks up right where it left off with its new Sky X7W Mobile Workstation, the company says.

The Sky X7W is powered by Intel’s i9-9900KS 8-core/16-thread processor and features NVIDIA’s Quadro P-series or GeForce RTX 20-series GPUs. It comes with a standard 17.3-in. display, up to 128GB of memory, with space up to 20TB of internal storage via four physical drives.

With a wide selection of vibrant displays ranging across different resolutions and refresh rates (up to stunning 60Hz 4K UHD) and the ability to support up to four separate monitors, users get the maximum visual performance and experience, the company says. It features built-in ONKYO speakers and subwoofer with a Sound Blaster X Pro-Gaming 360˚ sound system, and a backlit color-customizable keyboard. It also includes fingerprint and Kensington Lock security, TPM 2.0 and BIOS Disk encryption.

The Eurocom Sky X7W is fully-socketed, which means that users can customize, replace and upgrade their internal components as needed, allowing the laptop to keep up with increasing hardware requirements well into the future and perform at a high level for a very long time. It has a starting price of $2,166 USD ($2,599 CAD). The Sky X7W is another addition to Eurocom’s selection of GPU-upgradable, CPU and user-upgradable laptops. Eurocom laptops are specifically designed for long lifespan, heavy-duty use and engineering on-the-go.