3D Printing the Car of the Future

A Local Motors demo points to a new way of making cars via direct digital manufacturing. 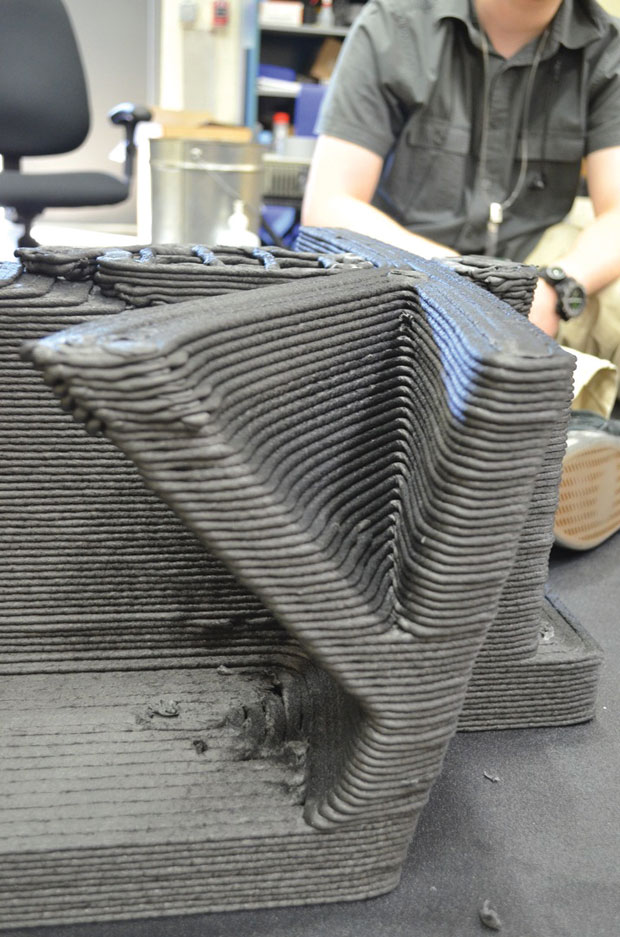 A close-up of part of the 3D-printed Strati.

When attendees arrived at the International Manufacturing Technology Show (IMTS) in Chicago last month, the Local Motors 3D printing demo was a must-see exhibit. The design and manufacturing collective-produced car was printed directly on the show floor over five days using newly designed, large-scale 3D printing equipment. Potentially, this type of printing could not only open up new possibilities for vehicle design and manufacturing, but could also make it possible to produce lighter components and vehicles at a reduced cost.

Local Motors printed the chassis, body, seats and other interior components in several large pieces, then joined them to pre-existing drive components, tires, a steering wheel and other parts. The printed Strati was then driven off the show floor at the close of the event. The company used carbon fiber composite ABS from SABIC Innovative Plastics to create the car.

The technology to accomplish this grew out of work at Tennessee’s Oak Ridge National Laboratory. Oak Ridge initially created the large-scale printing equipment at the behest of Lockheed Martin, using a plastic extruder attached to a robot on an XY gantry system. Oak Ridge then teamed with Cincinnati Inc., an Ohio-based machine tool manufacturer, to commercialize the process.

“Local Motors initiated the concept of printing the car before we’d ever built a machine,” says Rick Neff, manager of market development at Cincinnati Inc. “They had seen the prototype gantry at Oak Ridge.”

According to James Earle, the engineer who supervised the work on the Strati at Oak Ridge, Local Motors CEO Jay Rogers immediately saw the potential for auto manufacturing when he visited the facility. Local Motors set up a design challenge for its members. “We also issued design rules, which are very different than for traditional auto manufacturing,” Earle says. 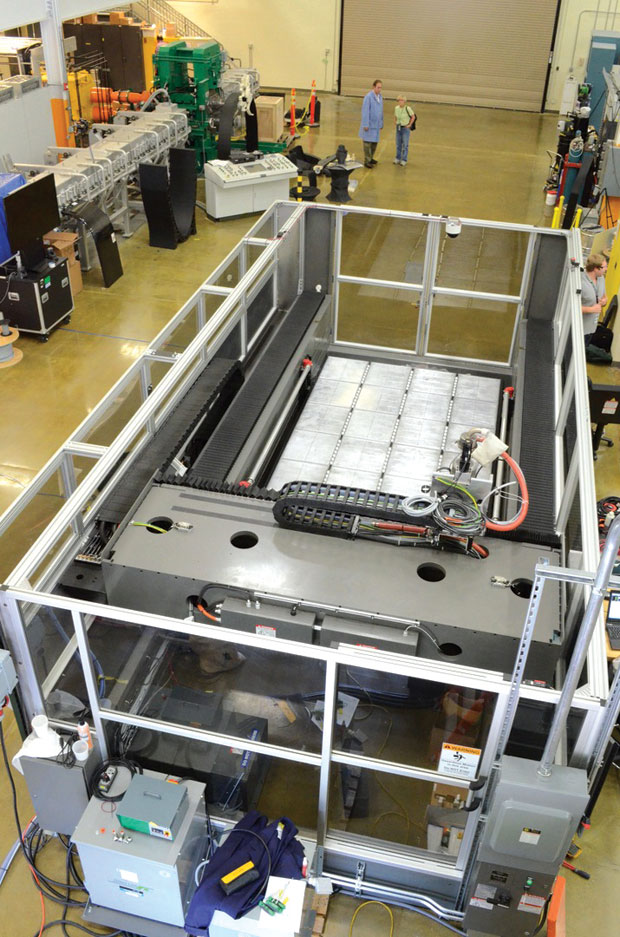 Designs had to be modified so that they could be easily printable. For example, elements like overhangs, which are difficult to print without generating supports, had to be eliminated.

The B.A.A.M. has a build volume of 2x4x0.87 m. “The challenges you find with this type of large system are the same as you would find when printing small parts, but they are literally bigger,” Neff says. “People say that complexity is free with 3D printing, but that isn’t really the case. The more complex you make the part, the smaller the nozzle you need to extrude the plastics. You sacrifice speed for complexity. If we want to go fast, we need a larger nozzle at higher rates, and you lose complexity.”

Neff adds that there is still typically post-processing needed for most printed parts. “We have to machine some areas of the part to provide accuracy or connection points for the drive system or suspension,” he says.

Local Motors CEO and co-founder John “Jay” Rogers is quick to introduce a broader term to describe the way the Strati is manufactured. “It’s direct digital manufacturing to us,” he says. “It’s not just 3D printing, but became known as that colloquially. It was really driven by the idea of reducing part complexity. We wanted to pit the capability of the computer, design software, printing machine and milling machine vs. the complexity of a car. ”

Local Motors created the first prototype Strati at Oak Ridge in May 2014, and it was on the road in June. It took 38 hours to build the first one. The drivetrain, suspension and other mechanical parts come from a Renault Twizy electric car. Check out the test drive here:

Originally, Local Motors planned to produce the Strati in one piece at IMTS, but the vehicle was actually printed in several parts and then joined together. “We have the space to print it in one piece, but the extruders we’re using don’t have the material flow rate to keep the thermal mass high enough on the part, and we ran into some deformation problems as the part cools,” Earle says. “We had to reduce the size of the parts we’re printing to maintain integrity.”

That’s a challenge that will eventually be overcome, he adds. Cincinnati Inc. also has the capability to produce much larger and smaller versions of the B.A.A.M.

3D printing an entire car has far-reaching implications on future vehicle designs. For one thing, printing can greatly reduce the complexity of the car by reducing the number of individual components needed.

“The world is on a hell-bent path that was accelerated by the internet, says Rogers. “That path leads to virtual design meeting physical manufacturing. Just like electric car was talked about since 1905, and has just become commonly available recently — sometimes takes 100 years for tipping point to happen. I feel a lot like there’s a tipping point going on now. You’re seeing design for manufacturing, design for additive manufacturing, or direct digital manufacturing ... we’re finally, happily, moving past the word prototyping.” 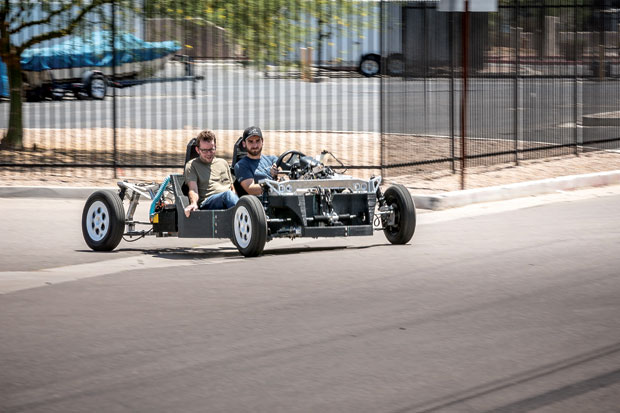 Taking the prototype out on a test drive.

Rogers says he hates the word prototyping because it means to the consumer that it’s a product they’ll never see. “Designers, especially in CAD, we want people to think ‘If you can design it, it can be real.’”

For members of the Local Motors community, the first step toward that reality often begins in Siemens PLM Software’s Solid Edge. Almost three years ago, the company introduced a special edition of Solid Edge, dubbed Design1, and made it available to Local Motors for a subscription fee of $19.95 per month.

“That gave us the ability to purchase professional-grade CAD software for basically the cost of a pizza each month,” Rogers says. “That was really important to us as a statement that ‘This is not beyond you.’”

Karsten Newbury, senior vice president and general manager of Mainstream Engineering Software for Siemens PLM Software, says the company’s move to a rental offering is about the “digital enterprise.”

“One of the key trends in the consumer world is mass personalization — accelerating the time people can get something real in their hands that is their own,” he says. “It’s not just about the 3D printed car. It’s really about the whole process ... what we call the digital enterprise.”

In such an enterprise, if designers don’t have to consider the limitations of a traditionally more complex manufacturing model, it opens up all sort of possibilities when it comes to both styling and durability. Eliminating the need for multiple welds, bolts and clips, for example, also eliminates hundreds of points of failure on a vehicle.

“The way we make cars today, there are hundreds of stamped parts that are expensive to make, and they have to be primed and painted and welded,” Neff says. “That involves lots of hours of machine time and labor to put them all together. The majority of that work can be done in one piece with 3D printing, and it opens up the possibility for mass customization in the future.

“I don’t think Local Motors thinks this will replace GM or Ford anytime soon, but there are people who want to buy a very individualized car,” Neff continues. “This can cut many labor hours out of the construction of the car, and make mass customization affordable for the average consumer.” 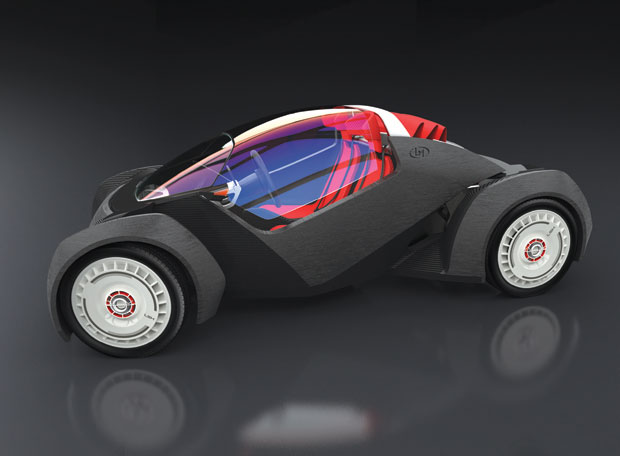 A rendering of the completed Strati.

In terms of lightweighting, printing also presents the possibility of reducing weight in non-load bearing components like seats. “You can tailor the material to the application in the car,” Earle says. “You have high-strength material for the structure, and lighter weight, less-dense materials for other components. You can greatly reduce the weight of the vehicle by simply changing the material.”

Neff cautions that just because the vehicle is printed from lighter weight materials doesn’t automatically make it light.

“Carbon reinforced plastic is fairly light, but there is a lot of material in this particular car,” he adds. “To meet the new Corporate Average Fuel Economy (CAFE) standards, cars have to be lighter, stronger and more aerodynamic. This would certainly, at a minimum, provide people with a way to prototype cars and test them aerodynamically in a much easier, faster way.”

While large-scale vehicle printing is likely a few years away, both the auto and aerospace industries are interested in the technology for creating dies and tooling in a much faster and cheaper manner.

“When airplane manufacturers create parts, they have to get dies made for tooling, and that involves having a large piece of metal CNC-cut to a specific shape,” Earle says, referring to the computer numerically controlled process. “That is expensive. In aerospace in particular, they may only make 100 parts off of a wing mold.”

With 3D printing, he notes, the same mold can be made for a lot less money, and the turnaround is faster: “It’s a few days vs. several months. The other benefit is you don’t have to store those molds. You can reprint them later.”

For the auto industry, there could be immediate application for cheaper, faster prototyping, in addition to creating small runs of custom vehicles. But if you can print a car that is durable, easier to manufacture, and weighs much less than a traditional model, what are the implications for repairability? If the entire body of the car is made from one piece, what happens when you crash and damage the rear fender?

“Right now, if you have to replace a panel, it can cost several thousand dollars,” Earle says. “We’d love to get the technology to the place where we can reprint the entire car for less than the cost of the panel repair.” Conversely, different parts could be printed in different materials. A bumper made from a softer, more shock-absorbent material could be popped out and replaced quickly, for example.

At press time, Local Motors has no plans to produce another Strati after the IMTS demonstration, but Cincinnati Inc. and Oak Ridge have continued to refine the printing technology. There are several prototype B.A.A.M. systems available for testing, and Cincinnati Inc. is searching for companies with potential applications for the units.