Creo and Windchill were among the key 3D modeling tools used in the development of the National Ignition Facility.

Creo and Windchill were among the key 3D modeling tools used in the development of the National Ignition Facility. 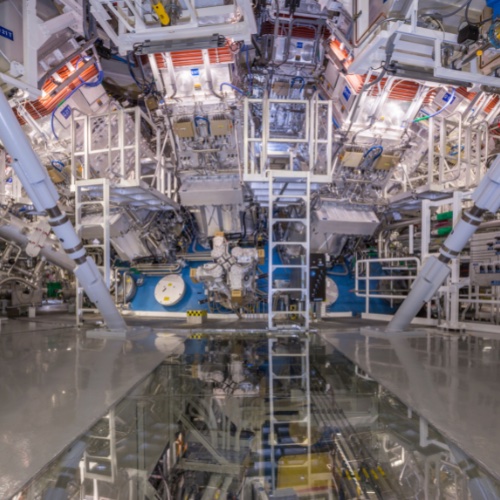 The National Ignition Facility (NIF) is believed to be the largest Creo and Windchill assembly ever created. Image Courtesy of Lawrence Livermore National Laboratory

Heralded around the globe as major scientific breakthrough and the future of clean power, the recent fusion ignition milestone achieved by the U.S. Department of Energy (DOE)’s Lawrence Livermore National Laboratory (LLNL) scored another, albeit less vaunted first: It’s likely the largest assembly ever modeled in 3D CAD.

The stadium-sized, massive National Ignition Facility (NIF), roughly the scope of three football fields, is described by LLNL as the world’s most precise and reproducible laser system. The high-precision NIF “guides, amplifies, reflects, and focuses” 192 powerful laser beams into a target about the size of a pencil eraser in a few billionths of a second. The target can then generate temperatures of more than 180 million degrees Fahrenheit and pressures greater than 100 billion Earth atmospheres. Scientists call such an extreme reaction nuclear fusion, and the results deliver more than 2 million joules of ultraviolet energy and 500 trillion watts of peak power.

On December 5, an LLNL team conducted the first controlled fusion experiment in history—a milestone Biden Administration officials said would be a “game-changer” for on-going efforts to achieve the goal of a net-zero carbon economy. “We have had a theoretical understanding of fusion for over a century, but the journey from knowing to doing can be long and arduous,” said Dr. Arati Prabhakar, President Biden’s chief adviser for Science and Technology and director of the White House Office of Science and Technology Policy, in prepared remarks.

Another first was the size and scale of the 3D models that propelled the NIF’s design. PTC’s Creo CAD tool and Windchill PLM platform were used throughout the development of the NIF, which comprises more than 3.5 million components and 750,000 unique part designs. PTC said the highly-engineered NIF “system of systems” machine was likely the largest Creo and Windchill assembly ever created.

PTC officials said the firm has partnered with the LLNL, including the NIF engineering team, for over 25 years. Initially the NIF team selected Pro/ENGINEER CAD software, now Creo, as its core modeling tool, later adding Windchill to the mix to handle data management throughout the lifecycle. LLNL has also been instrumental in advancing PTC software, leaning on the developer for specific functionality, including lightweight 3D visualization capabilities, which the partners collaborated on with PTC eventually adding them to the main platform.

“Lightweight 3D visualization was advanced in collaboration with the NIF team because it is the only practical way to share this volume of data across the large team and supply chain involved in the project,” wrote PTC President and CEO Jim Heppelmann, in a blog post discussing the NIF breakthrough. “Because it made our products more capable, every customers around the world has benefitted from PTC’s collaboration with the NIF team.”

Watch this video to learn what it took to make the NIF a reality.