Stratasys Ltd. unveiled a new product under development, the Stratasys Continuous Build 3D Demonstrator, at the RAPID + TCT 2017 show in Pittsburgh. Commercial product availability has not yet been announced. 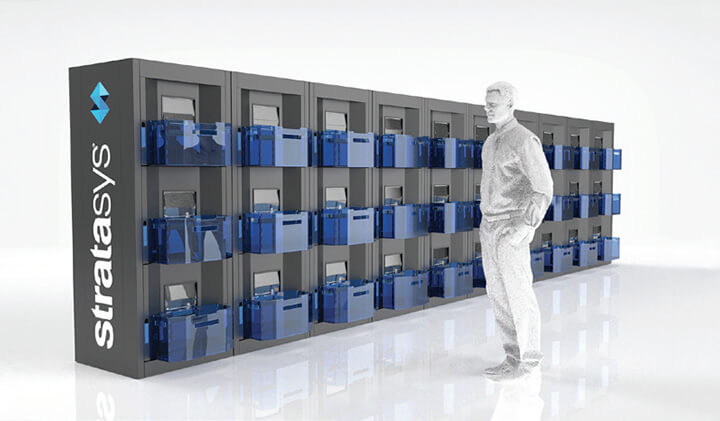 The new platform has a modular unit with multiple 3D print cells working simultaneously and driven by a central, cloud-based architecture. The Stratasys Continuous Build 3D Demonstrator is designed to produce parts in a continuous stream with only minor operator intervention, automatically ejecting completed parts and commencing new ones.

Each 3D print cell can produce a different job to help enable mass customization projects. Additional cells can be added at any time to the scalable platform to increase production capacity as demand requires. Automatic queue management, load balancing and architecture redundancy further lead to accelerated throughput as jobs are automatically routed to available print cells. If a single print cell fails, the job will be automatically rerouted to the next available cell.

In other news, Stratasys and Desktop Metal extended their strategic partnership designed to accelerate accessibility and adoption of metal additive manufacturing. The partnership, announced during RAPID’s 2017 conference, includes distribution activities and opens the door to further go-to-market activities in the future, according to the companies.

As a result of this partnership, customers will be able to work with Stratasys resellers who will begin representing Desktop Metal solutions, including the recently announced Studio System and the Production System, alongside Stratasys’ family of advanced FDM and PolyJet solutions.