As the XJet Carmel AM Production System made its U.S. debut at RAPID + TCT, XJet has announced new sales, illustrating that market adoption of its NanoParticle Jetting (NPJ) technology is now well underway, the company reports. 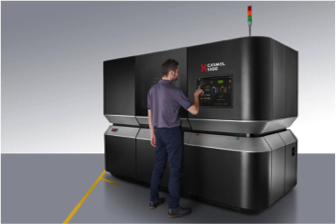 The XJet Carmel 1400 AM System makes its US debut at RAPID + TCT. Image courtesy of XJet.

“This year RAPID + TCT represents significant advancement for XJet as the business moves out of the research lab and into an established market position,” says Hanan Gothait, CEO and founder of XJet. “With several installations under our belt, including YBI in Ohio, and new customers announced today, we are showing the market this transformative technology is now proven and ready to change the way products are made, across myriad industries including medical, aerospace, automotive, energy and many more.”

New customers confirmed include Russian service provider, AB Universal, and Israeli manufacturer Syqe Medical, known for its metered-dose medical inhaler. XJet has also disclosed that orders have been signed by customers in Italy and Switzerland.

AB Universal has cited market potential for 3D printed technical ceramics in Russia as the driver for its investment. Syqe Medical however had a specific need – precise heat-resistant parts for the production of its inhaler. Preferring additive manufacturing processes for reduced timescales and more creative freedom, XJet’s technology fully met the requirement, according to Syqe Medical Founder and CEO Perry Davidson.

XJet announces a new 20,000 square foot AM Center – located in Israel and led by Liat Laufer, XJet AM Center manager – due to open in the coming months and has been honored with a Technology Innovation Award from global research and consulting organization Frost & Sullivan. Frost & Sullivan’s Best Practices Awards recognize companies throughout a range of regional and global markets for leadership, technological innovation, customer service and strategic product development.

Frost & Sullivan notes that XJet’s delivery of a user-friendly device with advanced programmable characteristics, remote operating systems and highly sealed ink cartridges that ensure user safety on a secure platform is a best practice exemplified by the NanoParticle Jetting technology.