Panelists discuss promise and challenges of implementing AM in the military. 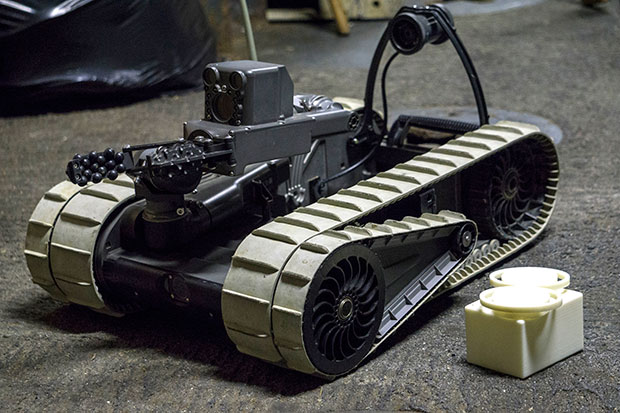 An iRobot 310—a small, unmanned ground vehicle—sits with 3-D printed lens covers aboard the USS Wasp while underway in the Pacific Ocean. Marine Corps photo by Cpl. Stormy Mendez.

At the Additive Manufacturing User’s Group 2018 (AMUG 2018) event that took place in April, a panel featuring representatives from the U.S. Marine Corps, Army, Air Force and Navy discussed some of the hurdles specific to military branches that are adopting additive manufacturing technologies. Below is a partial transcript of that panel discussion, which has been edited for length and clarity.

Zunino: One of the groups I co-chair is the Army Additive Manufacturing Community of Practice that’s put together within the Army, and we actually have members represented from the other services as well. The reason we put the group together is to develop AM expertise while operationalizing process and applications, designs, and goals to rapidly provide state-of-the-art solutions. The readiness is very important to us, but as well we don’t want to get above innovation in the new stuff, so we use AM where it makes sense; currently and in the future.

We’re looking at sustainment in design at the point of need—getting the right tools, software, hardware, equipment—to the soldiers, with the right education and training, so they can make what they need to keep boots on the ground, birds in the air, and tanks rolling out.

It’s not just structural stuff like metals and polymers; but we’re also looking at electronics. Our key thinking is the organic, industrial base. We don’t want to make and do stuff in the Army if we can transition on technology to the industrial base. The only exception to that is at the point of need where sometimes we need to make something far forward as a battlefield repair or a temporary holdover until we can get replacement parts, or we can design the permanent fix. 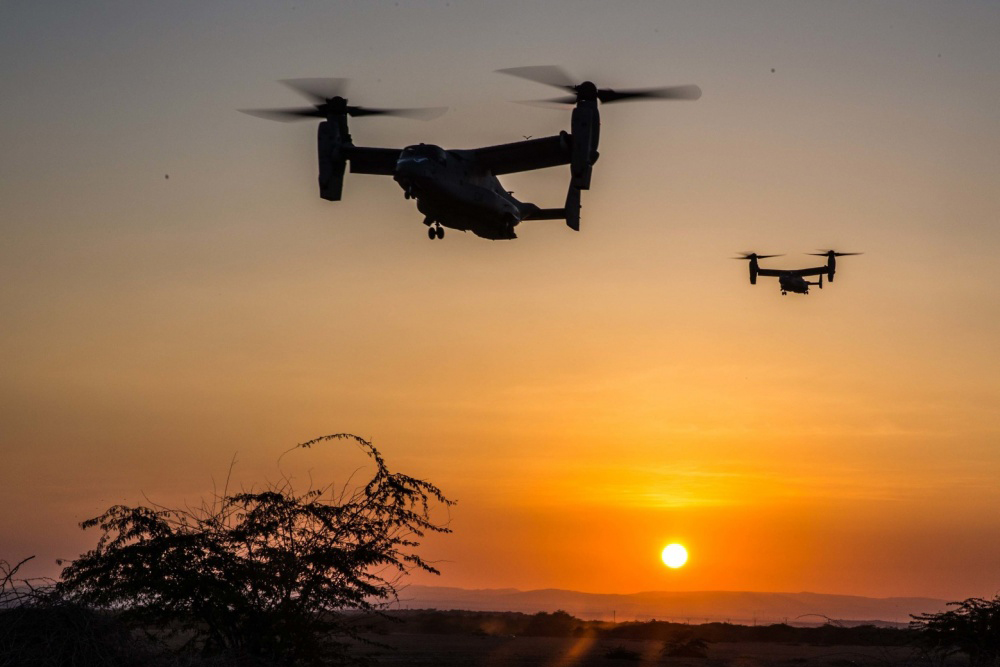 MV-22 Ospreys approach a landing zone during a training exercise conducted in Djibouti. Ospreys can transport Marines and sailors quickly to the battlefield due to their ability to tilt their rotors horizontally and fly like an airplane. Marine Corps photo by Lance Cpl. Brandon Maldonado

We also use AM for unmanned systems, that includes aerial systems, ground systems, underwater systems, and we have a lot of effort in AM for armaments. One of the keys to all the stuff the army’s doing is a digital depository. We have a system called RAPTOR (Repository of Additive Parts for Tactical & Operational Readiness), but in general the DOD is working on a common database depository that keeps all that information so soldiers can get the information on parts they need and make the stuff.

We in the Army have a three-tier approach of what we’re trying to do, we’re actually operationalizing AM into our systems anew. (The second stage is) parts alternative, so that’s like a one-to-one replacement. Now we’re kind of in the phase where we do process alternatives, where AM is a better process or equal process to what we’re currently using. That’s where we’re standing right now, and where we’re ultimately trying to get to is true design for AM, so it’s a product alternative, so it’s something we couldn’t make before or the technology wasn’t there.

Froning: In mid-2015 we went to our depots and we looked at what we had. At that time we found 30 printers in place being used. Now, I’ll tell you most of them were small tabletop units; but there were some larger AM machines. What we found was excitement among the people doing it. They were really trying to push the technology. But what we also found was no configuration control, everybody was working in little silos, there was no process standardization, there was no digital thread.

But now, today we’re up to 50 including eight metal printers. So, tomorrow what we’re trying to do is get to the library of qualified parts. We want to continue to build the database of materials. And really what it’s all about is standardizing our AM with documentation, certified operators and machines. Its all about how do I get to the future where I have agile manufacturing in a global manufacturing network, a digital thread and a cyber secure parts library?

Our whole goal in the Air Force is to keep birds in the air. So we’re never going to be making more than a few parts at a time; but when we need them, we need them. So we have a lot of unintended spares out there.

I’m going to leave you with two takeaways today. The first, and I’m very convinced from both my manufacturing background in the industry and developing processes, that you learn by doing. You don’t do it by studying it, and then put your person in production, then from day one production is done. It doesn’t happen that way. So, the first takeaway is if you really want to get into it, you’ve got to go do it. And that means making lots of parts.

The other thing is what I saw immediately when we started getting our metal printers, was people were focusing on cost. What’s it going to cost to make this here? I’m going to tell you right now, you probably already know this, when you start to learn how to make the part, it’s not going to be inexpensive, it’s not going to be less expensive than the part you were making traditionally. However, if you start looking at parts where I’ve got a three-year lead time, or I can’t get it. That’s hard to put a price on. 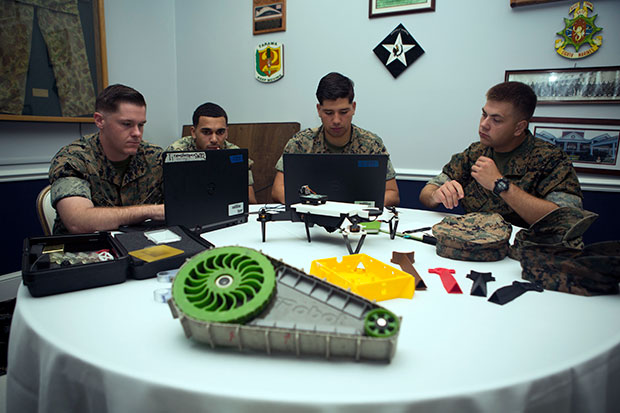 Bridges: So the Navy has been doing adding to manufacturing for a long time—12, 15, 20 years—we’ve been doing additive manufacturing. We didn’t do what the Air Force said and start easy with additive manufacturing end-use parts. We manufactured and installed in 2016, a flight-critical titanium component on an MV-22 (Osprey). I think it’s maybe the first AM flight-critical part in the Western world in operational airplanes. The parts are still on that MV-22, it’s sensored, we’re monitoring it. It wasn’t a readiness driver, it wasn’t something that we had to do, it’s something we did because we would like to learn about AM parts, and we knew that if we could do a critical part, we could do everything

We’re concentrating on three primary places where we want to print, right? So the first is in my depots. So I want to make a thing that’s going to keep my plane, or my ship, functional for however long it’s supposed to. I want to make the right thing on that platform at the right time to get it back into service. We’re doing a lot of work to make things internally, but that’s not what we want. We want to come to you guys, the industry, and say ‘I need things that have been obsolete and the guys been out of business for 35 years.’ I need that, and I need a lot of one, right? I don’t need a lot of 50 or 1,000. I need a lot of one of this part to put on the airplane, or ship to get it back operational.

The other thing that’s really important to us, is if I have a platform deployed in an operation environment, I need a backup. If a critical ship system or combat system goes down; I want to get that system back up. It doesn’t have to be back up forever, it might just have to be back up for two hours. That’s a big culture change to the Navy.

So, we, in the Navy, we’ve identified five primary challenges that we need to overcome. Those challenges are qualification and certification … we need a digital thread to be able to securely share files amongst ourselves, within the Navy. I need to be able to print in a floating expeditionary environment. I need a trained workforce; and I need a business process to be able determine ‘Should I print it?’ 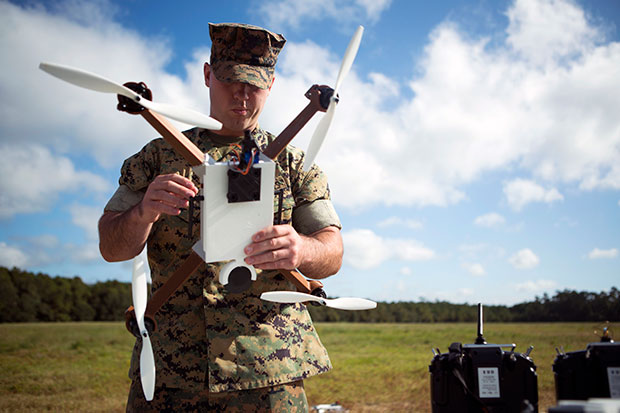 Hopkins: I’m going to go through the Marine Corps’ focus on some use cases for AM here. As we’ve mentioned before, readiness is a huge driver.

The M1A1 (tank), was deadlined due to one component. Sergeant designed the original and sent that over to engineering. It took a few iterations, and a month to approve but it’s installed. So it reduced the lead time from 300 days down to three days.

An innovation challenge led to Innovation Bootcamp Training. This is one to two days where we have folks go out into the field—engineers—training our Marines so that they understand the current capabilities of the technology and they can make wise decisions. The Marine Corps is fast and lean. You can imagine you can only carry in so much equipment, so they’re looking at how can we reduce what we carry in. With this training, they’re able to design and produce unit-specific solutions that have already been proven for deployed environments.

As far as tailored capabilities, we have the Nibbler, which is an unmanned aerial vehicle. The Marines needed something that was low-cost, literally just to look over the hill and see what’s on the other side. So instead of $10,000+ drone, here is a design that could be 3D printed that was actually designed in house. If it crashes we can quickly print another component in the field using low-cost 3D printers.

We also have a (3D-printed) snowshoe clip. If you can imagine the frustration, you don’t want to carry extra snowshoes because they break and this happens pretty frequently. The Marine Corps produced their own design that was cheaper and alleviated a lot of frustration.