The BOXX APEXX S3 workstation delivers the best price/performance of any system Digital Engineering magazine has ever tested.

We got our first look at the new BOXX APEXX S-class workstations during Autodesk University this past November, and the first impression was impressive. That’s no surprise. The Austin-based company has been building high-performance workstations for more than 21 years and DE has reviewed many of them. When a new BOXX APEXX S3 workstation arrived at our offices a few weeks later, we were more than ready to put it through its paces.

Based on an overclocked eighth-generation Intel Core i7 processor, the APEXX S3 replaces the previous BOXX flagship workstation, the APEXX 2 2403 (DE reviewed its predecessor, the APEXX 2 2402, in June 2016). The new S3 system comes housed in a new aluminum chassis measuring 6.85x17.75x15.25-in. (WxDxH) and weighing 24 pounds. The case is all black except for a small, brushed aluminum BOXX logo at the bottom of the removable front panel. As in previous BOXX workstations, that front grille conceals an air filter that is easily removable for cleaning. Behind it is a pair of 4-in. diameter cooling fans and a large radiator, part of the CPU liquid cooling system. 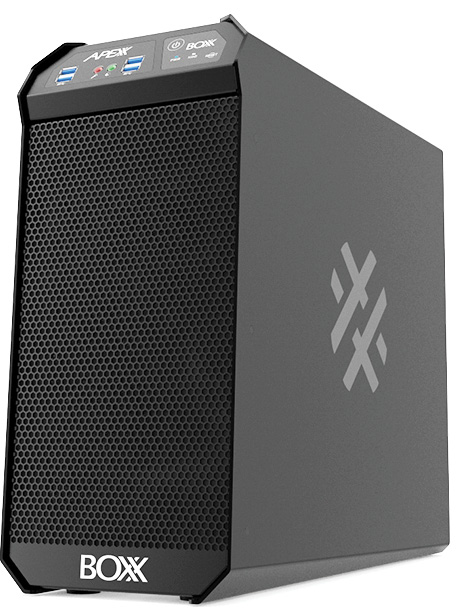 A sloping panel along the top front of the case contains four USB 3.0 ports, audio jacks for headphone and microphone, a round power button with a bright white LED power indicator, a blue hard drive activity light and a small reset button. A third cooling fan is concealed behind this front panel and blows air through the interior of the case. Like many other manufacturers, BOXX no longer includes an optical drive—the new case offers no front panel drive bays.

The rear panel provides four additional USB 3.0 ports, a USB 3.1 Type-A port, a USB 3.1 Type-C port, two RJ45 network jacks, HDMI and DisplayPort connections for the CPU’s integrated graphics, a PS/2 mouse/keyboard jack, an S/PDIF out port and five audio connectors (microphone, line-in, line-out/front speaker, center/subwoofer and rear speaker). There is also a pair of antennas for the built-in Wi-Fi and a button to clear the CMOS.

Loosening a pair of captive screws and removing the right-side panel reveals a spacious, well-designed interior. A pair of 3.5-in. drive bays with quick-release drive mounts hangs from the top of the case. Each of these can be split to accommodate a pair of 2.5-in. drives, but since the new APEXX S3 accommodates up to three M.2-based solid-state drives, both of these bays were empty in our evaluation unit. 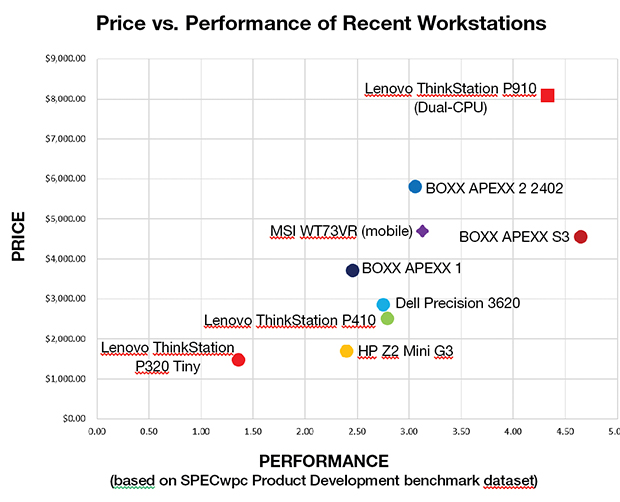 The new APEXX S3 uses an ASRock Z370 Taichi motherboard, with the CPU hidden beneath the liquid cooler, which is then tucked below the 650-watt power supply that occupies the bottom-rear corner of the case.

The only CPU BOXX offers in the APEXX S3 is the new Intel Core i7-8700K, which was just released in the fourth quarter of 2017, making this the first system we’ve received based on the new “Coffee Lake” six-core CPU. The processor includes a 12MB cache (4MB more than in the previous generation “Kaby Lake” CPU, to accommodate the additional cores) and integrated Intel UHD Graphics 630 (the same as in “Kaby Lake”). At its base frequency of 3.7GHz (4.7GHz max turbo), the 8700K has a Thermal Design Power (TDP) of 95 watts. But the “K” designation indicates an unlocked CPU multiplier, meaning that it can be overclocked. In the new APEXX S3, BOXX overclocks the CPU to 4.8GHz and then keeps things running smoothly thanks to the liquid cooling. 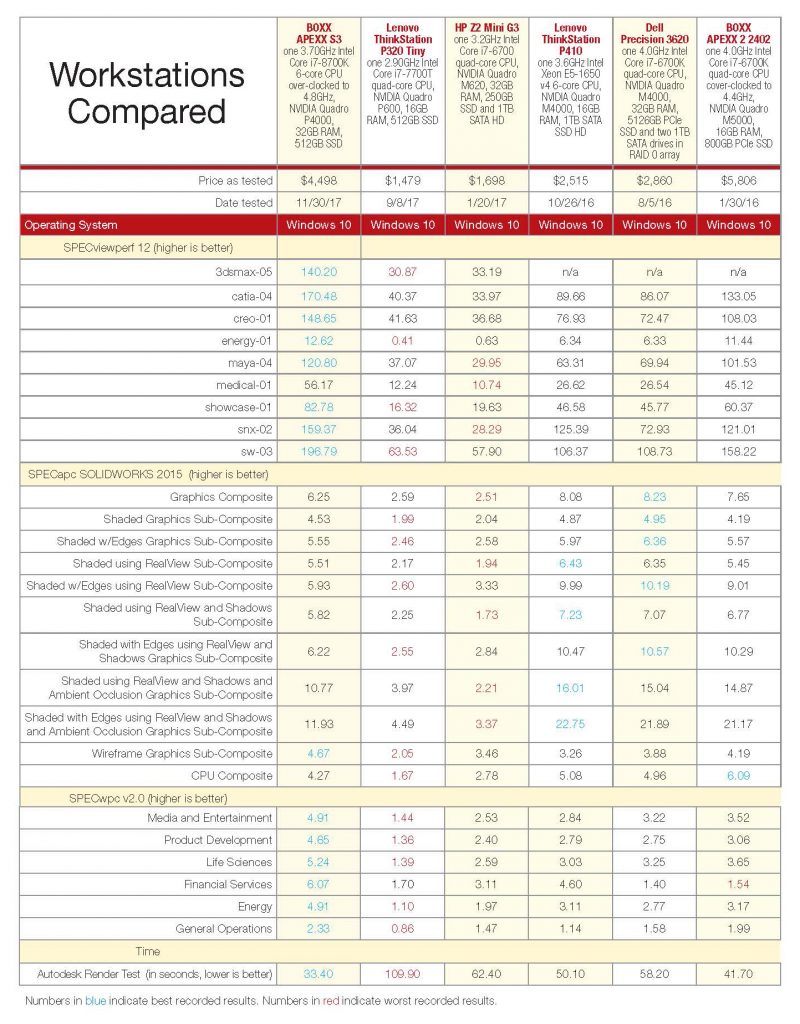 The system we received came with 32GB of DDR4 2666MHz memory, installed as a pair of 16GB DIMMS. The additional memory added $425. Because the motherboard provides four memory sockets, this left two more sockets for future expansion. If 32GB is all you will ever need, you could save $103 by going with four 8GB DIMMS. Opting for 64GB of RAM at purchase would add $1,173 to the starting price.

BOXX also offers a wide range of discrete GPU choices. Our evaluation unit included an NVIDIA Quadro P4000 graphics card, with 8GB of GDDR5 memory and 1792 CUDA parallel processing cores, contributing an additional $400 to the system cost. That board provides a 256-bit interface and a bandwidth of 243 GB/second, while its 105-watt power consumption requires an auxiliary power connection. Other options include NVIDIA GPUs ranging from the Quadro P600 to the P6000 as well as several AMD Radeon graphics boards. With its three PCIe x16 slots, the APEXX S3 can support up to three full-size GPUs and the spacing of the slots ensures that no adjacent expansion slots will ever be blocked.

Although our evaluation unit included only the 512GB SSD M.2 PCIe drive provided as part of the base configuration, BOXX also offers M.2 drives of 1TB and 2TB capacities, so you could have as much as 6TB of solid state M.2 storage once you get past the sticker shock. And that still leaves the two 3.5-in. drive bays at the top of the case. Here, BOXX offers SATA drives, with solid-state options ranging from 240GB to 4TB and 7200rpm drives with capacities of 2TB to 8TB.

With a high-end GPU and six CPU cores running at 4.8GHz, we expected the BOXX APEXX S3 to perform well, but the results we recorded on our suite of benchmark tests exceeded our expectations. On the SPECviewperf tests of graphics performance, the BOXX APEXX S3 achieved the highest scores we’ve ever recorded on all but two of the nine datasets. 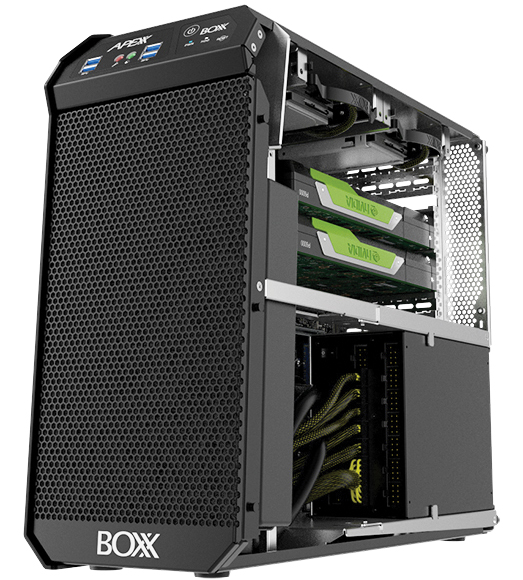 Although the system did not reach the same lofty heights on the SPECapc SOLIDWORKS benchmark, it still performed very well, setting marks among the fastest systems we’ve tested and turning in the top score on one of the 11 test components.

But perhaps the most telling results were those we obtained on the SPECwpc workstation performance benchmark and our own AutoCAD rendering test. On the SPECwpc benchmark, which includes six test suites representing vertical markets that often have very different computing demands, the BOXX APEXX S3 turned in the top scores on many individual tests (21 of 33). Those results place it at the top among single-CPU tower workstations in all six test suites, a position it retained in the Media and Entertainment, Product Development and General Operations categories, even when compared to the top-rated dual-CPU workstation.

On the AutoCAD rendering test, which clearly shows the advantages of fast CPUs with multiple cores, the new BOXX APEXX S3 surpassed every system we have ever tested, averaging just 33.4 seconds to complete the rendering.

BOXX rounds out the APEXX S3 with a Logitech K120 104-key USB keyboard and a Logitech M100 USB mouse, although our evaluation unit included a Logitech M500 USB laser mouse, a $29 add-on. BOXX also offers other input device options. Windows 10 Professional 64-bit comes preloaded and is the only operating system offered. Like its predecessors, the APEXX S3 is backed by a three-year warranty that includes premium next-business-day on-site service with 24/7 phone support during the first year and depot repair service and weekday daytime phone support during the second and third years. Premium support during years 2 and 3 is available in the U.S. and Canada for an additional charge.

As equipped, the new BOXX APEXX S3 we reviewed priced out at $4,498, considerably less than its predecessor, while delivering performance that surpassed workstations costing nearly twice as much. Even the $3,644 base configuration would likely beat much of the competition. Simply put, the new BOXX APEXX S3 represents the best price/performance of any system we have ever tested at DE, making it a great choice for anyone doing CAD or 3D modeling.