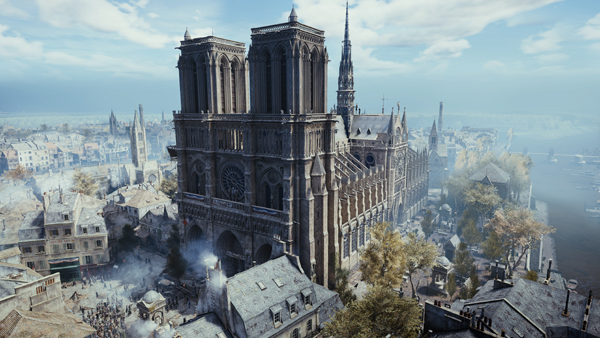 The digital model of the Notre-Dame Cathedral as it appears in the game Assassin’s Creed Unity by Ubisoft. Image courtesy of Ubisoft.

The news of the fire at the Notre-Dame cathedral was devastating to Bernard Charles, CEO of Dassault Systemes.

From his official twitter account, he wrote, “My heart is filled with sadness. Notre-Dame de Paris on fire. Our history and values ​​shared by so many in the world who share our pain. I think about my Friend Frank Gehry who first open my eyes and heart on the beauty from the East side view.”

My heart is filled with sadness.
“Notre Dame de Paris” on fire. Our history and values ​​shared by so many in the world who share our pain. I think about my Friend Frank Gehry who first open my eyes and heart on the beauty from the East side view. pic.twitter.com/3HyTG0Tm0Q

Known to the engineering community for its 3DEXPERIENCE design and simulation software, Dassault Systemes is headquartered in Vélizy-Villacoublay, about 45 mins away by car from the historic cathedral.

The New York Times reported that the spire and much of the roof of the 800-year-old Gothic architectural masterpiece is now gone. Thoughts now turn to reconstruction.

How to rebuild the Notre-Dame

Even before the fire was out, French President Emmanuel Macron has pledged the Notre-Dame will be rebuilt.

“We'll rebuild Notre-Dame even more beautifully and I want it to be completed in five years,” he said in a televised speech, according to BBC.

In another tweet, Charles also pledged, “Dassault Systèmes offers its 3DEXPERIENCE platform, 3D robotic simulation modeling and collaborative 3D project, to restore the beauty of this most admired symbol of our Values. Art Sciences and Technologies serving this 5 years ambitious reconstruction.”

For the reconstruction, a detailed 3D digital model of the cathedral would be a tremendous resource as a reference. One is to be found inside the virtual world of Assassin's Creed Unity. 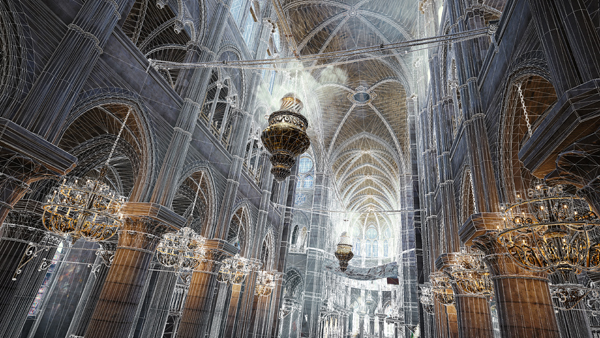 The game level artists meticulously modeled the interior of the Notre-Dame Cathedral for the game Assassin's Creed Unity. Image courtesy of Ubisoft.

Published by Ubisoft, the adventure and role-playing game let players travel back in time to eve of the French Revolution to execute a series of missions.

Ubisoft has publicly pledged to donate €500K to the cathedral's reconstruction. According to its recent tweet, the game maker is also opening up the game for free play on Uplay.

In solidarity with everyone moved by Monday's events we’re donating to the restoration for Notre-Dame & giving you the chance to play Assassin’s Creed Unity on Uplay for free.

A laser scan of the cathedral

Another point-cloud digital replica of the Notre-Dame is somewhere in the servers of Vassar College, Columbia University. The late art professor Andrew Tallon used laser scanning to capture the majestic domes and columns inside. As a result, he also discovered what few knew about the passing time's ravages in the old masterpiece.

Speaking to Time on the extent of the Notre-Dame's decays, Tallon said, “The damage can only accelerate ... The flying buttresses, if they are not in place, the choir could come down ... The more you wait, the more you need to take down and replace.”

Some of Tallon's scans can be seen in his project website here. He passed away last November.

According to a feature published in The Verge in 2014, “For Caroline Miousse, a level artist on Assassin's Creed Unity, building a virtual likeness centuries later took considerably less time—she spent around two years modeling the landmark inside and out.”

Miousse's two-year labor of love and the late professor Tallon's scan may very well help meet French President Macron's ambitious five-year deadline to rebuilt the cathedral, to raise its spire again in time for the 2024 Olympic in Paris.