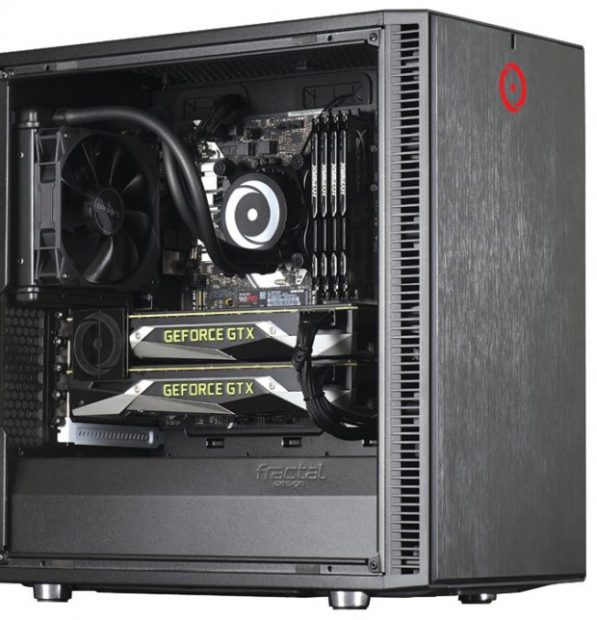 The Origin PC M-Class workstation we reviewed came housed in a Fractal Design Mini C case like the image above, but was equipped with a single NVIDIA Quadro P5000. Image courtesy of Origin PC.

We recently received a new workstation from Origin PC. Although not as well known as some other system integrators, we have reviewed systems from Origin PC before (DE, August 2015). The Miami-based company was founded in 2009 by former employees of Alienware as a builder of high-performance gaming computers. Origin assembles its computers in the U.S. using imported parts and backs those systems with lifetime free 24/7 tech support and free labor.

The company sells three types of professional workstations—S-Class, M-Class and L-Class—which simply represent the physical size (small form factor, mid-tower or large). Because all systems from Origin are individually assembled, begin by selecting the size and then selecting components to configure the system.

Buy it or Build It

Because Origin PC builds systems using readily available components, one could purchase the same parts and build it on their own—it just takes time, some basic skills and a bit of confidence. But is it worth it? We priced the parts used in our M-Class workstation to see how much we could have saved if we assembled it ourselves:

That means if one were to purchase the parts and build it on their own, it would save less than $700 (compared to the as-built Origin price with a one-year warranty). Buying a system assembled by trained technicians and backed by a warranty from a reputable company is worth the cost when it comes with the peace of mind of knowing that the system is guaranteed to work when it shows up at the door. With Origin charging less than a 16% premium, rest easy and let them build it.

For this review, Origin sent us its latest M-Class professional workstation, housed in a charcoal gray Fractal Design Mini C case that measured 8.25x16.12x16.12 in. and weighed 25.25 lbs. The company also offers the same system in a Phantek EVOLV case, which costs $87 more. Both cases feature a large window in the removable left panel and can be equipped with interior lighting for an additional $30. Users can also have the Phantek case painted in a custom color for an additional charge.

The case has a monolithic front panel sporting an Origin PC logo near the top. A large, round power button and small reset button are centered on the top front edge of the case, flanked by headphone and microphone jacks to the left and a pair of USB 3.1 ports to the right. The rear panel provides five more USB 3.1 ports, a USB 3.1 Type-C port, PS/2 keyboard and mouse sockets, an RJ-45 network connection, an optical S/PDIF output port and five audio jacks (center/subwoofer, rear speaker, line-in/side-speaker out, line-out/front speaker out and microphone) as well as two antennas for the built-in Wi-Fi. The panel also houses a DisplayPort and HDMI port for use with the integrated CPU graphics.

Next, users choose the technology, which determines the motherboard used. Again, Origin offers lots of choices, including systems based on AMD Ryzen, Intel Xeon and Intel Core processors. The choice determines the base price. For our evaluation, Origin sent us a system with an Intel Core i7-8700K CPU, which meant that it was based on an MSI Z370M Gaming Pro AC motherboard. When housed in the Fractal case, the system had a starting price of $1,198 and includes a 3.6GHz Intel Core i3-8100 quad-core CPU with onboard graphics, 16B of 3000MHz memory, a 120GB solid state drive, a 500-watt power supply and a one-year warranty.

For our evaluation, however, Origin sent us a much more robust system. So, we used the company’s website to determine exactly what it would cost. Our system included high-performance fans, rather than the standard case fans, which added $33. Our M-Class workstation also included a 650-watt EVGA Supernova G3 series power supply, adding $54. Although one can also pay $68 more for colored power cables, our system came with standard black cables.

Based on the initial technology selection, Origin offers a choice of six different Intel CPUs, including the new Intel Core i7-8086K Limited Edition processor. Our system included an Intel Core i7-8700K 6-core processor, which added another $280 to the price. That Coffee Lake CPU has a base speed of 3.7GHz (4.7GHz max turbo), a 12MB SmartCache and a 95-watt TDP (thermal design power) rating. But since our system was overclocked to 4.9GHz (which added an additional $75), it included an Origin Frostbyte 240 sealed liquid cooling system, a $25 upgrade over the standard cooling system. The GELID GC-Extreme thermal compound added $15 more.

Although the Intel CPU includes Intel UHD Graphics 630, users can add up to two discrete graphics cards, selecting from the 18 different AMD and NVIDIA cards Origin offers. Our system included an NVIDIA Quadro P5000 high-end workstation graphics card with 16GB of GDDR5X memory and 2560 compute unified device architecture (CUDA) cores, installed in one of the two available PCIe 3.0 x16 slots on the motherboard. This board has a 256-bit interface and a bandwidth of 288GB/second. Because it consumes 180 watts, it requires an eight-pin auxiliary power connection, and its double thickness causes it to block one of the two available PCIe 3.0 x1 slots. The NVIDIA Quadro P5000 added $2,155.

Our system came with 64GB of memory, installed using four 16GB 3000MHz memory modules, which filled all four sockets and added $713. For storage, Origin offers lots of choices, including solid-state drives ranging from 120GB to 4TB, mechanical drives from 1TB to 10TB, 1TB and 2TB hybrid drives and PCIe M.2 drives with capacities of 256GB to 2TB. Depending on the drive selected, users can configure them in a RAID array. Our M-Class workstation included two drives—a 512GB Samsung 960 Pro PCIe NVMe M.2 primary drive ($292) and a 3TB Seagate Barracuda secondary drive ($105) installed in one of the two available drive bays. Origin also offers Intel Optane memory drives and external optical drives (since the case provides no optical drive bays). 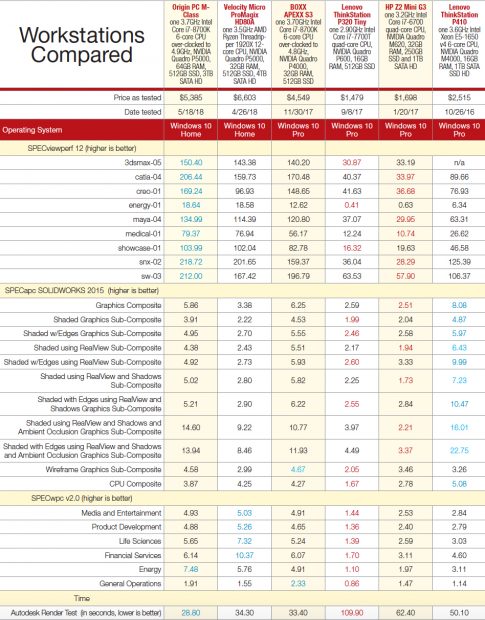 To evaluate the performance of the Origin PC M-Class workstation, we ran our usual collection of tests. On the SPECviewperf benchmark, which focuses on graphic performance, the system turned in the best results we have ever recorded on all nine of the individual datasets. On the SPECapc SOLIDWORKS benchmark, the system also performed quite well, with results placing the Origin M-Class workstation near the top of the pack. 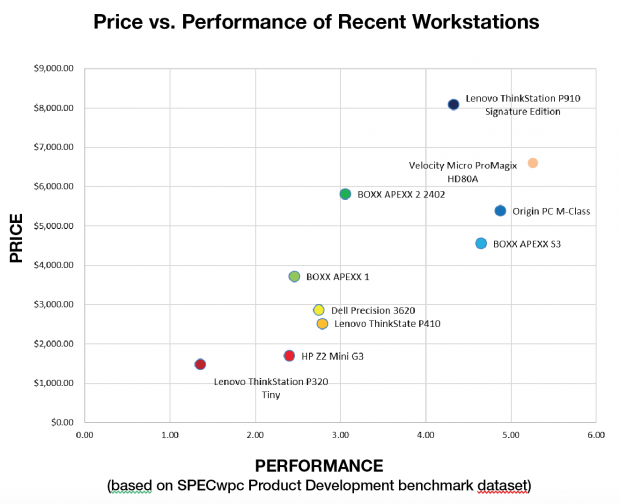 On the very demanding SPECwpc workstation performance benchmark, the Origin M-Class workstation performed very well, turning in top scores on some individual components of the suites of tests (including Media and Entertainment and Product Development) and achieving the best overall results in the Energy category of tests.

On our AutoCAD rendering test, a multi-threaded test that shows the advantage of fast CPUs with multiple cores, the Origin PC M-Class workstation took an average of 28.8 seconds, just 3.5 seconds behind the fastest system we have ever tested.

Throughout our tests, the system was very quiet. It was barely audible against the ambient noise most of the time, with sound pressure increasing to just 46dB under heavy compute loads.

Origin comes preloaded with Windows 10 Professional 64-bit, or save $129 by ordering the workstation without an operating system. Our M-Class workstation arrived with its standard cardboard box packed inside a wooden crate, like the Millennium Pro X2 workstation we reviewed three years ago. When we went through the online configuration, however, we noticed that this added $50 to the cost of the system, so we did not include the crate in our as-configured price.

Origin does not include a keyboard or mouse unless those are specifically added to the order. Here again, Origin offers lots of choices, including USB and wireless input devices. We added a basic Microsoft wired keyboard ($25) and optical mouse ($15).

Origin also only includes a one-year parts warranty in its base price. But, since workstations from most major OEMs come with a three-year warranty, we added the longer parts warranty ($399) in determining the “as-tested” price.

Once we tallied everything (including the input devices and longer warranty), our system priced out at $5,385—expensive, but reasonable considering everything that was included. Although not quite as fast as the Velocity Micro ProMagix HD80A workstation we recently reviewed, the Origin system costs $1,200 less while delivering excellent performance. Choosing an NVIDIA Quadro P4000 instead of the P5000 would reduce the price of the Origin M-Class to just over $4,000. Either way, the Origin M-Class workstation is a class act.