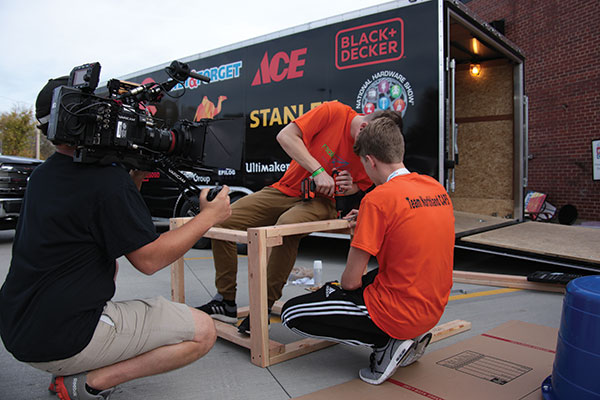 Teams must create prototypes for each design challenge within 48 hours. Image courtesy of Make48.

Digital Engineering: Can you provide an overview of the Make48 competition and how it started?

Tom Gray: Make48 was designed as an interactive, competitive event in the maker and educational community and is now a televised docuseries on PBS. Make48 brings together 10 to 12 teams (of two to four members) from all different backgrounds and skill levels to invent and make prototypes within the specifications of a challenge, in 48 hours. The show is led by fabrication experts and mentors who help the teams bring their ideas to life, using the right tools and materials. We then take the winning prototype on a product development journey.

Gray: The program came about with a few friends: Richard Brull, Tom Gray, Bob Coulston and Curt McMillan. All are involved in the inventing community and discussed having an event for inventors in Kansas City, MO. We’ve filmed three seasons/events for television, but there have been seven competitive events all together. The events have taken place across the country, including The Smithsonian in Washington D.C. and Union Station in Kansas City. Teams of all ages and skill levels have participated. Teams have consisted of families, co-workers, friends, students and even strangers. Members have been as young as 8.

In season 2, 12 teams came from 12 different states. In season 3, teams consisted of students from colleges around the country.

Season 2: The Wedgie (chair that can be positioned in multiple ways), 360 Uplight (solar lighting system) and the Drink Slinger (a device to carry six drinks in one hand).

Our event has launched the winning prototypes in seasons 1 and 2. Some have been successful while other prototypes have run into issues on the developmental journey.

In season 1, the Heel Seal was created by Team Marquee Design, was launched and is currently being sold by The Handy Camel. The drain stopper is comprised of technology that eliminates movement, while still allowing water to flow through and keep gunk out. The product works best on a smooth surface, like a stainless-steel sink in the kitchen, but can be applied in smooth showers.

DE: Does Make48 have a particular stance on adopting an innovation? What drives firms to sponsor the event and coordinate it?

Gray: Companies and businesses that support Make48 support the entrepreneurial spirit of small business, startups and home inventors. These are companies who are aware of the importance of supporting innovation, the Maker Movement and initiatives like Make48 that celebrate innovation.

Gray: Moving forward we are still focusing on consumer-based products but with an emphasis on major issues that need to be resolved. Make48 believes in building a community around innovation and supporting the invention process from napkin design to building a prototype—all in 48 hours.

We believe that our show taps into the entrepreneurial spirit of what innovation is. For Make48, innovation means that anyone can have a big idea, and with the right tools and collaboration, can invent and innovate.