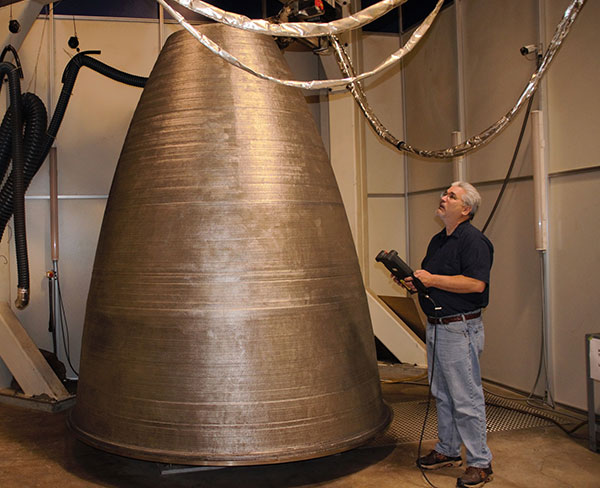 Consider the “Star Trek” replicator as a harbinger of things to come. The made-for-TV system concocted meals on demand and materialized other small items during fantasy space expeditions. Today, real-life 3D printing technology is actively mirroring that replicator role, producing critical objects for space missions and laying the groundwork for off-Earth housing.

Thanks to ongoing advances in additive manufacturing (AM) technologies, processes and materials, the research labs, government agencies and corporate entities involved in space exploration are increasingly factoring 3D printing into their mission roadmaps.

At NASA, In-Space Manufacturing (ISM) is among the more active areas where 3D printing is making a mark, intended to deliver “just in time” manufacturing capabilities in space as opposed to hauling spare parts and structures on an extraterrestrial mission—a near impossible feat given the cost, logistics and space limitations of the launch vehicle’s payload. 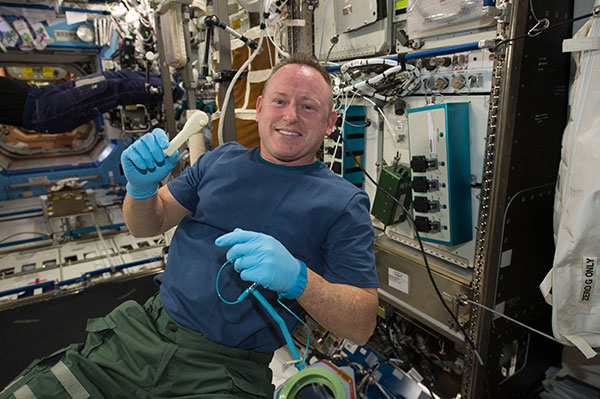 The ratchet wrench was produced onboard the ISS using a design file transmitted from ground and an early on-board 3D printer. Image courtesy of NASA.

AM is seen as a viable construction medium for off-Earth housing due to its flexibility and propensity for remote operation, not to mention the potential for using new or recycled materials found on the moon or Mars as the core feedstock. Back on earth, there are myriad emerging space-related AM applications, including the ongoing use of metal AM technologies for producing high-precision, high-performance aerospace propulsion parts.

It’s also become a good fit for space exploration and space-related applications for many of the same reasons it’s now a driving force in terrestrial manufacturing, according to John Vickers, principal technologist, Space Technology Mission Directorate at NASA.

“AM provides a revolutionary and transformative way to manufacture products on earth and it’s the same for in-space applications,” Vickers explains. “It allows us to do things in space in ways we’ve never done before.”

In fact, AM delivers the most versatility compared to more conventional manufacturing methods and it’s best situated for robotic operations—a must for off-Earth initiatives.

“Any manufacturing done in a remote location needs some level of autonomy and AM is almost entirely digital,” Vickers says. “The ability for remote, robotic, autonomous operation is one of the biggest advantages for AM.”

While manufacturers are drawn to AM for its ability to output highly complex, geometric shapes for terrestrial use cases, those same advantages apply to in-space manufacturing applications. The ability to design complex parts with internal cavities and organic geometries enables in-space crews to build almost anything.

“We have a lot of work left to do with materials and the performance of parts, but AM really is ideal for in-space manufacturing,” Vickers says.

Those same principles make AM a natural fit for high-precision aerospace propulsion applications—the rocket engines and vehicles that will launch space teams to their remote destinations, adds Paul Gradl, principal investigator for the Rapid Analysis and Manufacturing Propulsion Technology (RAMPT) project at NASA, which is tasked with advancing manufacturing methods to improve performance and reduce production costs of rocket thrust chamber assemblies.

While AM is being considered to augment, not replace, conventional manufacturing methods, it has key advantages, including the ability to produce higher performance, lighter weight parts as well as those with complex shapes and channels to meet requirements of sophisticated fluid flow and heat transfer applications.

“Aerospace parts are challenging to make—there’s a lot of work to get the quality, geometry and metallurgy right to meet the requirements in really harsh environments,” Gradl says. “With AM, there’s potential to significantly reduce that lead time by as much as half. Some parts that traditionally have taken 12 months or more to design and make can be finished in a month.”

The ability to manufacture in space is essential for solving the logistics quandary of long-endurance space flight. According to NASA/MIT research, there are approximately 13,000 kilograms of spare mass items required for in-orbit transits with another almost 18,000 kg of mass stored on ground to support space flight missions.

NASA’s historical data found that 95% of spares will never be used and it’s almost impossible to predict which items will be important; at the same time, despite years of testing and operations, unanticipated system issues always arise, which means no amount of planning and provisioning will cover all bases for any single space expedition.

Enter ISM, which addresses these concerns and removes many key constraints, including the need for structures to be designed for launch loads and to fit within the vehicle payload restrictions. Material disposal at end of life for key equipment is another core challenge in space as is the need to preposition all spare parts and equipment for on-orbit surfacing and repair, NASA officials say.

The testbed for NASA’s ISM roadmap is the International Space Station (ISS) with the Marshall Space Flight Center acting as the lead center. One of the first initiatives involved sending a fused filament fabrication (FFF) 3D printer developed by Made in Space (acquired by Redwire) to the space station in 2014 to create 3D parts and to investigate the impact of 3D printing parts in zero gravity—the results of which revealed no engineering-significant effects on the process caused by microgravity. Next came the formation of the additive manufacturing facility (AMF), a permanent manufacturing facility and multimaterial 3D printer for polymers on the space station that provides capabilities for on-demand repairs of essential components and an ability to build tools on demand upwards of over 200 assets to date, according to a Redwire spokesperson. 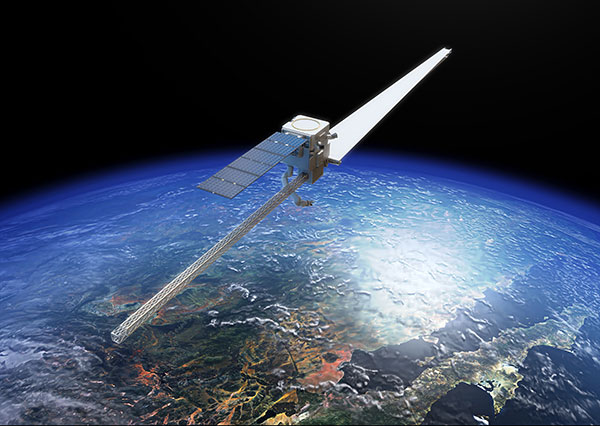 Redwire and NASA are collaborating on the OSAM-2 (On-Orbit Serving, Assembly and Manufacturing) initiative, which uses AM technology to build and manipulate structures and tools in space. Image courtesy of Redwire.

One such object was a ratchet wrench, which was designed, approved by NASA reviewers for safety and sent to space for printing in less than a week. Since that first use case, NASA has employed the AMF to produce various other functional parts on the ISS, including an antenna, an adapter that holds a probe central to the station’s oxygen generation system, shield enclosures and Synchronized Position Hold, Engage, Reorient, Experimental Satellites (SPHERES), a type of robot that performs autonomous flight formations.

In conjunction with fabricating items in space is recycling in space—an initiative headlined by the Refabricator, an integrated 3D printer and recycler unit produced by Tethers Unlimited. The Refabricator is intended to steer NASA toward creating a closed-loop system by turning plastic waste and existing 3D printed parts into high-quality 3D printer filaments that can be used in space to create new tools and materials.

As NASA progresses with 3D printing of “spares and repairs,” the ISM initiative was broadened to include infrastructure such as lunar shelters, roads and landing pads. One company making a play for the off-world construction market is ICON, a maker of advanced construction technologies that combine 3D printing, robotics and advanced software and materials. 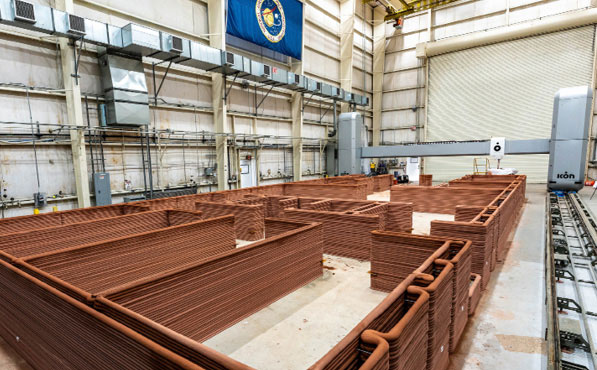 “3D printing introduces an effective means to robotically construct habitats and other structures on the Moon and Mars without the exorbitant expense of launching materials and construction-related hardware,” says Melodie Yashar, director of building design and building performance at ICON. “We also want habitats and protective shelters available for crew before they arrive … and robotic construction enables us to print these structures autonomously and in advance of the crews’ arrival.”

Looking forward, ICON was also the recipient of a Small Business Innovation Research contract, including funding from NASA, to explore development of a space-based construction system that would support future Moon exploration. ICON’s “Project Olympus” will deploy on the lunar surface for construction of a wide range of infrastructure elements such as landing pads, unpressurized radiation shelters and pressurized habitats, according to Yashar.

“We are developing printing technologies that collect and utilize 100 percent lunar regolith and minimize the use of binders, additives and other materials launched from Earth,” she says. “This approach will enable us to sustainably construct a wide variety of surface infrastructure elements ensuring a permanent human presence on the Moon for years to come.”

Redwire, a leader in space solutions and a long-standing NASA partner, is also trying its hand at in-situ use through its Redwire Regolith Print mission. The company launched new custom-designed 3D printing heads to augment the AMF currently on board the ISS to demonstrate autonomous, on-orbit 3D printing with simulated lunar regolith feedstock material—the fragmented rock debris that covers the moon.

Redwire and NASA have also entered into a $73.7 million contract as part of the On-Orbit Serving, Assembly and Manufacturing (OSAM-2) initiative, which uses AM technology to build and manipulate structures and tools in space to demonstrate technologies for producing critical space infrastructure. Redwire’s in-space manufacturing expertise has led to development of the Vulcan Advanced Hybrid Manufacturing (VULCAN) System, which combines manufacturing methods into a single system to produce precision metallic, polymer and hybrid parts.

“VULCAN is paving the way for humanity’s expansion in space by enabling on-demand, in situ autonomous manufacturing in a range of reduced gravity environments,” Redwire’s spokesperson says. 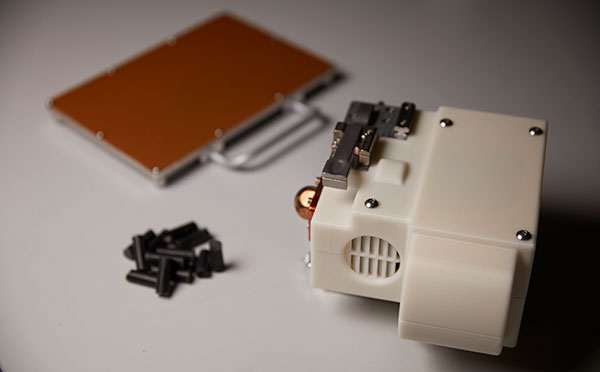 There is also work underway to apply AM technologies to print electronics. NASA’s multimaterial fabrication with printed electronics efforts is aimed at producing hybrid parts, including embedded electronics such as radio-frequency identification sensors, sensors for health monitoring of the crew and for power generation.

A Challenging Course Ahead

While NASA and its partners have made great strides applying 3D printing technologies to myriad space challenges, many known and unknown challenges remain as they navigate the ongoing journey.

Material science challenges remain at the top of the list, including the work underway to leverage off-Earth materials as well as understanding the basic physics of how materials and 3D printing processes work in space.

Testing, certification and qualification of 3D printed products in space is another major hurdle, requiring a significant paradigm shift in how common engineering practices are typically done, says NASA’s Vickers.

“A big issue is test, inspection and certification of parts,” he says. “Today, computer tomography and x-ray scans are used to inspect rocket engines and parts, but we don’t have those capabilities in space. We are talking about new processes, new materials and a new environment—how do we gain confidence that we understand what we’re building and know we’re not going to have any failures? We need to be methodical and intentional in our approach.”

Along with its own work, NASA has worked with standards organization ASTM International to provide support and financial backing to the AM Center of Excellence (AM CoE). As part of its collaboration, the AM CoE is tasked with promoting public/private partnerships to solve many in-space challenges and to define standards and qualification processes. The first such project is centered on qualification procedures for laser beam powder bed fusion AM processes.

Auburn University’s National Center for Additive Manufacturing Excellence (NCAME), a partner in the ASTM’s CoE, is also heavily invested in advancing AM’s use in space exploration. NCAME is partnering with NASA to advance AM research through public and private partnerships and to contribute to workforce development, according to Nima Shamsaei, Ph.D., NCAME director and Philpott-West Point Stephen distinguished professor.

In addition, the group is working to evolve and standardize such critical practices as simulation-based qualification, materials development and advancing NASA’s RAMPT project for advanced manufacturing around high-precision rocket engine parts.

While there’s a long road ahead, Shamsaei contends it’s only a matter of time before AM technologies have evolved enough to meet the needs of space exploration.

“We went to the Moon over 60 years ago and there were a lot of challenges then, but we worked hard to overcome them,” he says. “Like any other technology, it’s just a matter of time and investment.”