In addition to meeting NASA’s strict requirements for strength, durability, and weight, Lockheed Martin was able to reduce production time for the fuel tank domes by 87%, and cut delivery time from two years to three months. 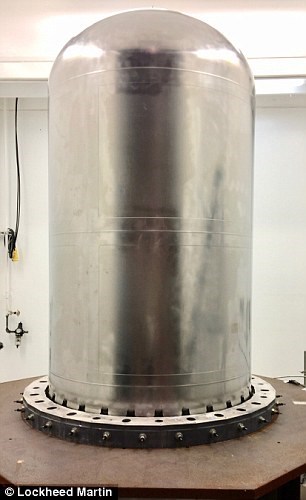 Previously, it took a year to create and deliver a 4-ft.-diameter, 4-in.-think titanium dome, but 3D printing has reduced production time by 87%, while reducing the amount of wasted material. Image courtesy of PRNewsfoto/Sciaky/Lockheed Martin.

Sciaky (a Phillips Service Industries subsidiary) announced that its Electron Beam Additive Manufacturing (EBAM) process had achieved qualification for making the tanks after testing that was part of a multi-year development program with Lockheed.

Lockheed Martin printed both halves of the 46-in. titanium fuel tank domes on an American-made Sciaky EBAM 110 machine. The tanks met or exceeded NASA’s performance and reliability requirements, which will allow the tanks to become a standard product option on LM 2100 satellites.

“Sciaky's EBAM technology is now the world's only large-scale metal 3D printing process that has qualified applications for land, sea, air, and space,” said Scott Phillips, president and CEO of Sciaky, Inc. “We are delighted to work with the innovators at Lockheed Martin Space and will continue to push the boundaries of additive manufacturing.”

In addition to meeting NASA’s strict requirements for strength, durability, and light weight, Lockheed Martin was able to reduce production time for the fuel tank domes by 87%, and cut delivery time from two years to three months.

Using traditional manufacturing methods, the process was much slower and 80% of the titanium used in the domes was wasted.

The EBAM system has a gross deposition rate from 7 to 25 lbs. of metal per hour, and also uses the company’s Interlayer Real-Time Imaging and Sensing System (IRISS) for adaptive control. The solution can sense and digitally self adjust metal deposition during the print.

The LM 2100 (an update of the A2100) is Lockheed’s largest satellite bus, and is used for high-powered missions.