MakerBot METHOD X is being tapped to create prototype and production parts for a NASA Lunar Rover project in the works at Lockheed Martin Space.

Makerbot METHOD X is being tapped to create prototype and production parts for a NASA Lunar Rover project in the works at Lockheed Martin Space. 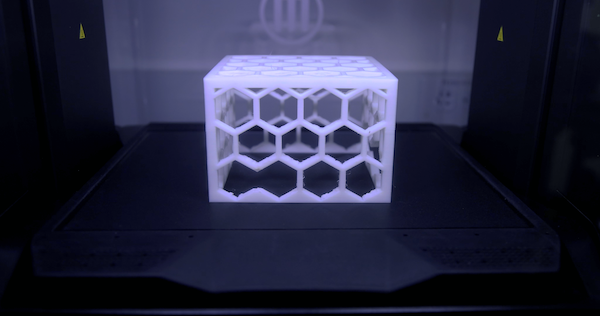 Now part of Lockheed Martin’s Advanced Technology Center (ATC), a state-of-the-art R&D center in Palo Alto, Calif., that includes a full crew of 3D printers, METHOD X is being tapped for early design exploration for parts in the rover’s autonomy system. METHOD X was added to the 3D printer lineup for its ability to print parts in ABS and Nylon Carbon Fiber as well for its heated chamber, which is noted for producing dimensionally accurate parts without the variable warping that is commonplace in other 3D printers.

NASA has been pioneering use of 3D printed parts in space for some time. The Curiosity rover landed on Mars with a 3D-printed ceramic part that was central to the Sample Analysis at Mars (SAM) instrument and its predecessor Perseverance has 11 3D printed parts destined for the Red Planet, many in the Planetary Instrument for X-ray Lithochemistry, an instrument used to examine rock surfaces for signs of life. NASA also recently announced a partnership with Redwire, a leader in space solutions and components, to develop a technology demonstration for 3D printing in space using simulated lunar regolith (rock debris) to eventually enable in-situ utilization (the practice of building products and necessities in space using local resources.)

The METHOD X is now front and center for outputting a variety of prototype and proof of concept parts for the Artemis mission lunar rover, including sensor mounts, embedded systems housing, and other custom parts. METHOD X’s ability to reliably produce dimensionally-tolerant parts also allows the design team to experiment with printing multiple parts that can easily be mated together, officials said.

At the same time, parts produced on the METHOD X offer greater performance for accurate testing during the early design and prototyping stage, according to Lockheed Martin officials. Use of 3D printing, and the METHOD X in particular, has enabled a fast and iterative design process, reducing wait time on parts from weeks to hours, said Aaron Christian, a senior mechanical engineer at Lockheed Martin Space. “This allows me to quickly test the 3D-printed part, identify weak points, adjust the model, send it back to print overnight, and then have the next iteration in the morning,” he explained, as part of a press release.

One example of a prototype part coming to life using the METHOD X is a mount used for the system’s LIDAR, the sensors used to help determine the proximity of surrounding objects used extensively in autonomous vehicles. Because the rover is a modular robot system, the LIDAR mount was produced in ABS so it can handle more extreme conditions than typical PLA materials. The mount was also designed to ensure maximum flexibility so LIDAR sensors can be swapped for different functionality, including a stereo camera, direction antenna, RGB camera, or rangefinder. Other notable design features made possible by 3D printing: The LIDAR mount’s complex organic shape, which would be difficult or impossible to produce with other manufacturing methods, and features designed to promote airflow to keep the robot parts cool and temperature regulated.