Simulation tools to appear in Enterprise and Pro Onshape subscriptions 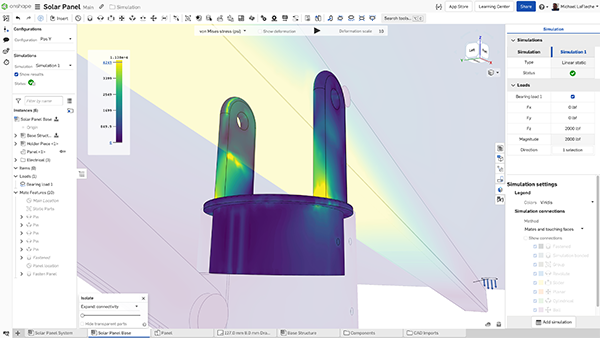 Onshape, the browser-based CAD program from PTC, is getting more bells and whistles. In a blog post, Greg Brown, PTC's VP of Product for Onshape, wrote, “With this new cloud-native simulation tool, product designers can now be more agile and can more quickly identify the best and worst performing aspects of their models – earlier in the design process than ever before.”

Brown revealed the new Onshape Simulation is derived from the TruSOLID modeling engine from Frustum, acquired by PTC in 2018. As an independent package, Frustum was known for its generative design (GD) and lattice modeling capabilities. Frustum's technology is also behind PTC Creo's GD tools.

“In the current implementation, Onshape users get linear static structural analysis—the bread and butter of simulation,” clarified Brown. “Onshape Simulation is Onshape. It's not a separate application.”

Whereas PCB and rendering features for Onshape appear as distinct and separate applications, called PCB Studio and Render Studio, the new simulation tools will appear in Pro and Enterprise subscriptions as integrated tools in the assembly environment.

For those who need to perform more complex FEA and CFD studies, Onshape partners such as SimScale, Onscale, and Altair offer applications from the Onshape appstore.

The strategy allows Onshape to compete on a par with other rival packages such as Autodesk Fusion 360 or SolidWorks, which come with integrated data management, simulation, rendering, and machining tools.

Brown also revealed that PTC plans to bring GD functions to Onshape in the future.