Autodesk, NASA work on proof of concept for 3D-printed habitats on Mars 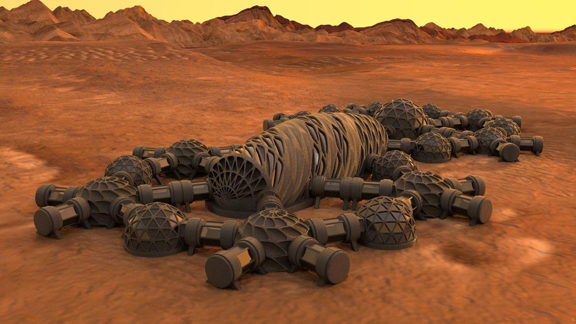 A rendering of how 3D-printed habitats might look on Mars (image courtesy of Autodesk).

Schaeffler Standardizes AM to Make It Production-Part Ready
Siemens AM Network to serve as the standard platform for streamlining entire AM order-to-delivery processes.
MakerBot LABS Adds Materials to METHOD Platform
This brings the number of METHOD materials up to 30, giving a greater selection of manufacturing-grade...
Editor’s Pick: New superalloy for laser powder bed fusion
Amperprint 0233 Haynes 282 nickel-based superalloy powder for Velo3D Sapphire printers is ideal for high-temperature applications.
Feb. 24 Webcast - 3D Printing: Designed to be Printed
In our next Hot Seat panel, experts discuss the design tools and techniques for a...
More 3D Printing

If what NASA envisions becomes a reality, such a sign may very well greet the pioneering earthlings who decide to relocate to Mars.

In late 2015, as part of its Centennial Challenges program, NASA held a design competition “to build a 3D-printed habitat for deep space exploration, including the agency’s journey to Mars. The multi-phase challenge is designed to advance the construction technology needed to create sustainable housing solutions for Earth and beyond.”

The teams were asked to not only render their concepts in Building Information Modeling (BIM) software but also to “autonomously 3D-print elements of the habitat.” Competitors got a chance to win part of the $2.5 million in rewards.

In July 2018, the third and final stage of the competition wrapped up. The space agency and its partner Bradley University of Peoria, Illinois,  picked five winning teams, awarding them between $19K to $20K each based on their scores.

In its blog post, NASA points out, “Creating a structure on the surface of Mars is an extraordinary challenge considering the extensive limits on transporting materials and the differences in atmosphere and landscape. The 3D-Printed Habitat Challenge aims to further the progression of sustainable shelters that will someday occupy the Moon, Mars or beyond ...”

Now it seems Autodesk has also become involved in the efforts to explore a 3D-printable habitat for the Red Planet.

In a blog post explaining the project with NASA, Raymond Deplazes, Autodesk's Manufacturing & Research PR, writes, “NASA’s Swamp Works lab is experimenting with 3D-printing habitable structures using a process called robotic extrusion, and a composite material made up of loose sediment (soil, dust, broken rock, etc.) and recycled plastic. The sediment, known as regolith, can be widely found on Earth, other planets, the moon, and even asteroids ... Based on NASA specifications, Autodesk’s Advanced Consulting team designed the barrier using tools such as Fusion 360 and PowerMill to comply with structural as well as robotic extrusion requirements while achieving significant weight reduction. Autodesk also developed the software to control the industrial robot arm ...”

The proof of concept is a success, according to Autodesk. “The first artifact that NASA has printed using this approach is a Jersey barrier—one of the modular barricades, typically made of concrete or plastic, that you often see separating lanes of traffic near road construction zones,” The company writes.

“End goal of the project is to build a full ecosystem of material, machine,and software for autonomous robotic construction. What we did with NASA was just a proof of concept. Next step is to scale everything up.” says Abhishek Trivedi, Consulting Business Development Executive, Autodesk.

Swamp Works lab is located at the Kennedy Space Center in Florida. The team is working on, among other things, a robotic miner called RASSOR, which stands for Regolith Advanced Surface Systems Operations Robot.”

Despite its alien-sounding nomenclature, regolith is readily found on earth as well as the Moon, Mars, and asteroids. The science and astronomy portal Universe Today explains, “regolith refers to any layer of material covering solid rock, which can come in the form of dust, soil or broken rock ... The surface of the Moon is covered with a fine powdery material that scientists refer to it as 'lunar regolith' ... Compared to lunar regolith, Mars dust is very fine and enough remains suspended in the atmosphere to give the sky a reddish hue.” 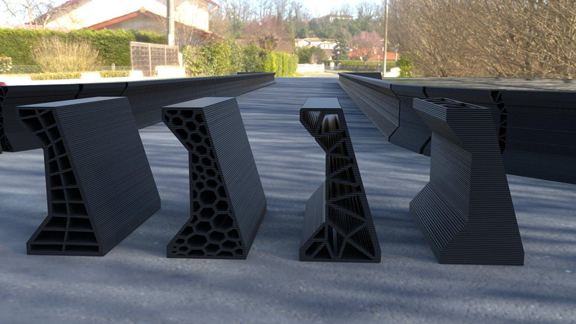 “Our current challenge in the context of the [NASA] project is to take manufacturing constraints related to robotic extrusion into account,” says Trivedi. “We identified delamination as an issue if extrusion is not controlled properly. I am sure we will identify more issues as we scale the technology up for large infrastructure projects.”

“Additive manufacturing technology has the potential to revolutionize the way we do construction here on Earth, too,” noted Massimiliano Moruzzi, Autodesk’s computational science research group. “If we can repurpose plastic pollution and use readily available natural resources to robotically print houses on Mars, we can use the same approach to sustainably build streets, sidewalks, and even playgrounds here at home.”