Can you tell a virtual machine from a real machine in a blind test? It’s not an existential philosophical question. The answer to that question gave one international automaker the assurance it needed to move its IT setup to 3D VDI, or virtual desktop infrastructure.

One day in early 2013, roughly six or seven employees from PSA Peugeot Citroën’s (PSA) manufacturing facility in Vigo, Spain, turned on their computers and began working as they’d always done. They thought they were running their CAD programs and opening their assemblies on the remote workstations housed in the HP Blade servers in the onsite data center. What they didn’t realize was that they were working with virtual machines, housed in an NVIDIA GRID server 978 miles away near Paris. They were part of a blind test, an early phase of the automaker’s program to replace some of its engineering desktops with virtual machines.

Singling out the Best Virtualization Candidates 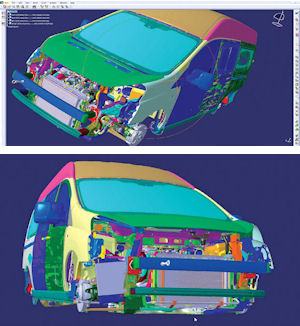 PSA Peugeot Citroën conducted a blind test in which engineers who were used to running Dassault Systemes’ CATIA software from their remote workstations were placed on virtual workstations powered by NVIDIA GRID instead. Test subjects didn’t notice any difference in performance.

PSA’s IT division oversees roughly 12,000 workstations, distributed across its global production sites. A segment of those 12,000 machines are in a one-to-one (1:1) remote setup, where each user is assigned one remote workstation housed in the data center. The IT framework was made possible by HP Remote Graphics software, which allows users to interact with their workstations from other client devices.

PSA has a decade-old partnership with NVIDIA, which champions the use of virtualization accelerated by graphics processing units (GPUs). In late 2012, with NVIDIA’s help, PSA became an early adopter of the NVIDIA GRID, a virtualization solution based on NVIDIA’s Kepler GPU architecture.

“We had ambitious goals defined for this project,” says Alain Gonzalez, expert for Workstations, Graphics Systems & 3D Imagery at PSA. “We wanted to have the same quality of designs while reducing costs versus classical workstation usage. We also needed to provide virtual workstation power on demand, improve the security and consolidation of data, reduce maintenance and power consumption, and add mobility to our designers.”

He explains that PSA workstation users can be separated into three distinct classes: entry-level users, midrange users and extreme or heavy users. “The best candidates for virtualization are the entry-level and midrange users with light to moderate needs for graphics,” says Gonzalez. “The higher-end heavy users may not be ideal for virtualization, but we’re going to evaluate their suitability later.”

When PSA got ready to launch its virtualization initiative, the IT department decided to conduct an experiment. Gonzalez and his colleague Thierry Regis, CAD workstation specialist at PSA, worked together to put a select group of engineers on virtual machines without their knowledge. “In terms of graphics performance or CAD performance, the blind-test subjects didn’t notice any difference,” says Gonzalez. “For them, the quality is the same as the 1:1 remote workstations.”

The standard CAD package at PSA is Dassault Systemes’ CATIA V5, which relies on the GPU for the most graphics-intense visualization tasks. To provide CAD users with a generous graphics boost, the company designates each virtual workstation with its own dedicated virtual GPU.

While debating the pros and cons of virtualization, Gonzalez and Regis put together a list of benefits to justify the migration. Gonzalez says, “There are about 50 items on that list.” One of the items—which was on the company HR officials’ wish list—is the ability to accommodate more work-from-home employees. It’s a common practice among U.S. tech firms, especially startups, but Gonzalez says the perk is not commonly available to workers in Europe.

“In the past, we weren’t able to allow people who worked with CAD software to work from home because the cost to accommodate them with remote workstations was not reasonable,” he says. “Today, the per-user cost has been reduced by 60%, so it’s possible.”

Since the design data resides only on the virtual workstations, which are on servers literally protected behind PSA’s walls, the company feels secure about sharing its intellectual property with the contractors through the virtual setup.

Previous remote workstation setup:
Maintenance and troubleshooting also get easier in the VDI setup. “In the past, if something was wrong with an end user’s machine, an IT person had to go to where the local workstation was located (under the user’s desktop) to fix it. With the virtualized setup, if there’s a problem with one virtual workstation, we switch it with another one. It takes just a few minutes,” Gonzalez explains.

Since the IT person doesn’t have to perform work on a physical machine, he or she could troubleshoot the virtual workstation remotely from anywhere. By the same token, when a designer or engineer needs to upgrade his or her memory to accommodate a particularly demanding workload (for example, to work on a larger-than-usual assembly file), the CAD support team can now remotely change the configuration of the virtual workstation without ever setting foot on the onsite data center.

“Now, the only time the CAD support team has to go onsite is when the end-user’s client device or terminal (for example, the laptop he or she uses to connect to the virtual machine) needs repair or upgrade,” Gonzalez says.

PSA’s current VDI is supported by NVIDIA GRID technology, which makes it possible for the company to deliver graphics acceleration along with the virtual machines. The case study published by NVIDIA describes the setup as follows: “[PSA’s] existing rack-mounted infrastructure containing two to three enclosures with eight Blades apiece was updated and replaced with extension boxes housing up to six NVIDIA K3100M GPUs per CPU blade. Combining the CPU blades with the GPU extension boxes allows server administrators to provide six complete workstations and power 48 users per enclosure. This hardware was paired with Citrix XenServer, XenApp, and XenDesktop to deliver each remote user’s allocated GPU and CPU resources.”

The VDI setup could allow engineers to connect to the virtual workstations from mobile tablets, says Gonzalez. “But the issue is the screen space,” he observes. “The current mobile devices have smaller screen, so it’s not easy for CAD users to do the operations the way they’re used to on larger monitors and laptop screens.”

The primary motivation to pursue virtualization is cost, Gonzalez says. “Breaking down the per-user cost, it costs us 60% less to do with virtualization what we did with a 1:1 remote workstation setup,” he estimates.